End of Season Report: The Second

Share All sharing options for: End of Season Report: The Second 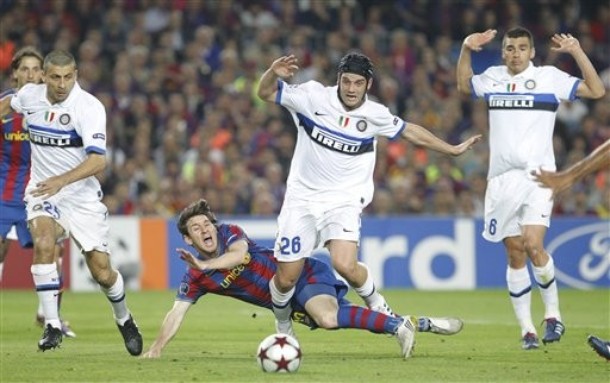 The last post was about the goalkeepers on the team - the specialists. This post is about the defenders - the foundation and backbone of the team. In the interest of time and space I will break up the defenders into 2 separate posts. 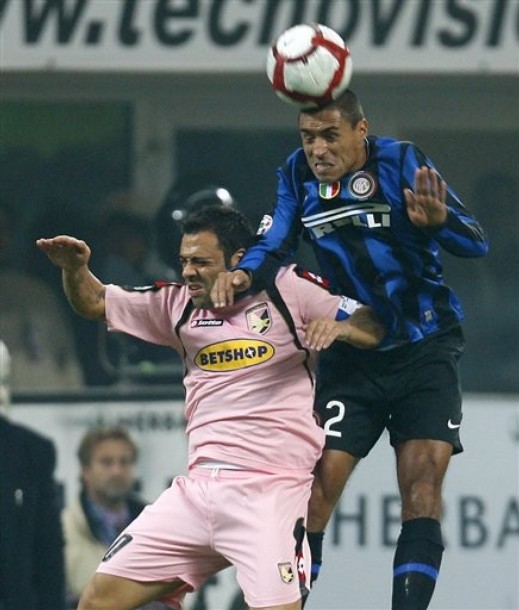 Cordoba: 21 Serie A appearances, 2 Coppa Italia, 2 Champions League (5 yellow cards, 1 red card)
I think it is clear that Cordoba is not the player he once was. He isn't terrible, and even with all his warts he is still better than many defenders plying their trade in the Serie A, but he is definitely in the twilight of his career. I applaud his his work ethic, though. Even when he was called upon to play as a full back, he clearly played it to the very best of his ability - he always goes all-in. And it wasn't all bad, he did quite well against Livorno, Bologna and Atalanta this Spring, and against Rubin Kazan last winter. Really, the only horror show was that expulsion against Sampdoria, and that game was bad on so many different levels, it is hard to blame him too much. Ivan has put 10 years of his life into Inter (over 400 appearances), and if he is slowing down a little, it is to be expected. I am glad he stuck around to finish this magical season instead of going to Manchester City last winter. After all those years of loyal service, he deserves this success. He will probably have one last season to help show the new kid (I am sure we will get at least one) the ropes. His vast experience and club loyalty is an asset to the team.

Grade: 6.5 (above average, but slowing down)

Cordoba: This season his role has been reduced somewhat with the inclusion of Lucio into the ranks. This reduction wasn’t a surprise or unexpected. Cordoba turns 34 in August – after a full decade in Black and Blue. But Cordoba played this season as a stalwart reserve and came into the game several times with minimal warm up and strategy discussion and was ready to play. You never heard that he was disappointed with his new position on the team and you never heard that the players wanted to strip him of the vice-captaincy. He did have his moments though and here I am talking about Sampdoria at home. He played well when called upon but he really was just a shadow of himself from 3 or 4 seasons ago. It looks like he’ll try to stay on for at least another season. 6.5 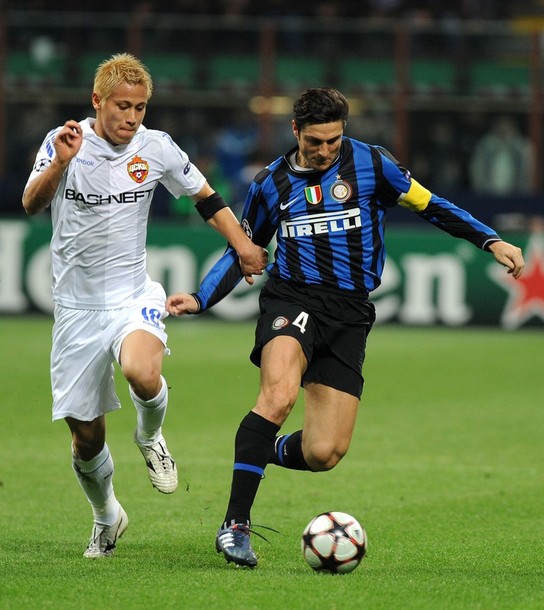 Zanetti: 37 Serie A appearances, 4 Coppa Italia, 13 Champions League (6 yellow cards)
I dont really know what to say about this man that hasn't already one place or another. He is almost beyond comprehension. This season he has been equally effective as a full back (right or left) or a holding midfielder - often during the same game. He is a Captain who leads from the front, and on more than one occasion this season he personally took the game by the scruff of the neck and pulled the whole team forward. When he goes on one of his tractor runs, almost nothing can stop him. This season, in defense, he effectively shut out some of the best strikers in the world. Plus, he does all this without mussing his hair. I think sometimes we Inter fans take Zanetti for granted. Because he is so reliable, so consistent, so willing and ready to do whatever the coach asks of him, I think we sometimes forget how rare a player like him really is. We have been blessed with his presence all these years; easily Moratti's best purchase as president.

Javier Zanetti: Is Javier a defender? Is he a midfielder? Is he some weird horse/man hybrid that can run all day with power and great, bouncy hair? He had a phenomenal season and the only way to get him off the field was to suspend him for yellow card accumulation. He played at least three different positions during the season. Several times he changed positions during the same game. If that’s all he did this season it would have been a very good season. He showed incredible leadership as an example on the field with his countless gashing runs forward when the team needed someone to provide a boost, as a liaison with referees to discuss our many issues and his ability to take charge of the team on the field. The Champions League Final was his 700th game and the conclusion of his 15th season with the club. When Zanetti retires, I will lose it. 8.5 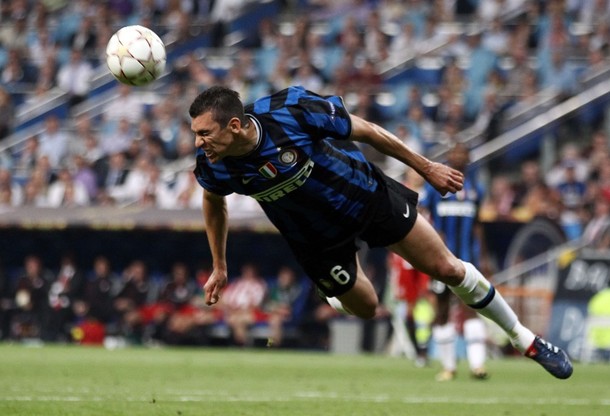 Lucio: 31 Serie A appearances, 4 Coppa Italia, 12 Champions League (10 yellow cards, 1 red)
Standing next to Walter Samuel, Lucio was half of the best defensive pairing in the Serie A. Alright, so he doesn't always have the most delicate of touches (hence the large card haul), but when he has his game face on, no one gets past him (the two Chelsea games and the semifinals against Barcelona come to mind). Plus, he scored a goal against Juventus - that always endears players to me. Ok, so was he perfect? No. Did he get the job done? Yes. Plus, he was practically free this summer. Bonus all around.
Grade: 7.5 (half a point for that goal)

Lucio: When Lucio joined the team last summer he was a compromise and a surprise. The compromise was that Mourinho wanted Carvalho from Chelsea who wouldn’t sell him. The World Cup winning Lucio had won every trophy in Germany and had gone to the doorstep of the Champions League with Munchen and Leverkusen. He was put on the equivalent of the blue light special. He had a wonderful season in which he showed off his skills. Lucio was bought with the idea that he would intercept that through ball or last pass into the area with his great vision and amazing awareness on the field. Lucio also proved himself to have an innate ability to intercept crosses and to give absolutely incredible effort in the back line. 7.5

Maicon: 33 Serie A appearances, 5 Coppa Italia, 13 Champions League
I know that there are many of you on this board who feel Maicon has peaked and that if we can get a load of cash, Inter should sell him while the selling is good. I, though, disagree. He is arguably the best right back in the world. How can it be a bad thing to have the best in the world? Plus, I recall a Sky Sports special for last year's scudetto where Susana Werner (Mrs. Julio Cesar) pointed out that Maicon is the heart of the team. And I think it is true. On the pitch he is passionate and professional, but in the locker room he is always smiling and laughing with his teammates. Clearly, he is skill-wise and personality-wise a huge asset to this team. He started off a little slowly, but he peaked right when we needed him to. With Zanetti covering for him in midfield, he easily transitioned from defense to attack, drawing defenders, and (except for the one shot to the rafters every game) feeding balls across the face of goal. With 11 this season, he is third in the league with assists. And that goal against Juve... How many full backs can do that?!? I say, cling while the clinging is good. Give him a raise and lets go get those other three trophies!

Grade: 9 (come on, admit it, that was a spectacular goal)

Maicon: When the season started I thought that his defending, which had been improving, took a step back. Maybe it was the rocky offseason where he almost left us and he had other things on his mind. But his offensive ability never left him and he had the best season of his career ever, with 7 goals in all competitions. Better yet, as the season wore on, and we moved to a formation where he wasn’t the only wide option anymore, his defense seemed to improve as he was forced to play it more often. Maicon might still leave us, it’ll be a sad day for me, but I loved having him here. I hope I can say the same thing next season. 7.0

Next up, in addition to others, we talk about this guy: 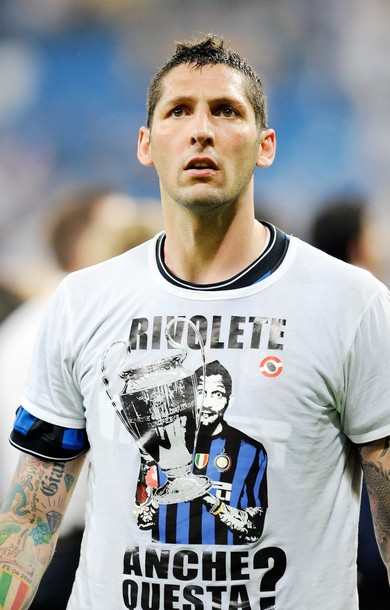