After the rigors of Barcelona, I have to say that I was quite worried about this game.

I wasn’t worried in a 2002 sense, although I was pretty amused that people kept bringing it up. This is not the same Inter on several levels, that wasn’t the same Lazio… and let’s be honest; it’s not the same Serie A, thank god.

I was happy to see that wasn’t the case. Right from the get go, we were ready to go. We created chances, we made nice passes and even after it looked like we were trying too hard we did a most important thing… we never stopped believing that this was our game to win.

Some might say that Lazio didn’t look their best, but, all due respect to Lazio, they had a tough season. I don’t think that they believed that they were going to win going onto the game from the midweek. Whether they tried to win or not, I would prefer to think that they were in throttle down mode, having all but secured safety thanks to Atalanta earlier today. There are lots of teams that are in cruise control having nothing to play for and I don’t blame them. It’s a long season and even playing games for a living has to wear on you at some point, like any other job.

It used to be that the last 4 games of the season were played at the same time. TV money changed that, so if someone were to blame for something, it would be the FIGC and whoever was buying the TV schedule/TV packages and whoever was in charge of accepting the new schedule at the time.

My Inter player of the Game: 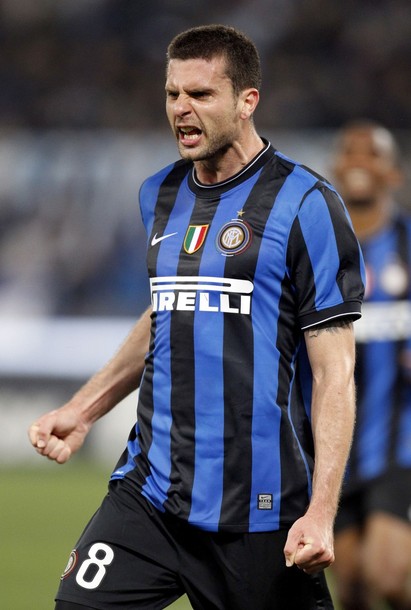 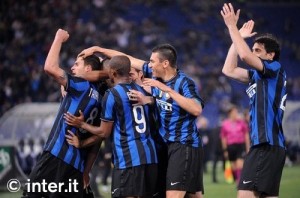 The game itself was pretty much what one might expect of a match between a team from the top of the table and a team near the bottom with nothing to play for and an arch enemy to have revenge on.

Muslera, obviously trying to throw the match, decided that he was going to save about 4 certain goals in the first 40 minutes – including a beautiful header from Maicon and a simply awesome free kick from Sneijder – before Walter Samuel put in an absolutely wonderful header right in the opposite side netting from where Muslera was leaping. It was a close second in wonderfulness to the one he scored in the Champions League group stage this season. The assist, of course, came from Sneijder.

Exactly what in the holy hell Il Muro was doing up there to begin with, I have absolutely no idea. While he was sprinting up, passing our midfield at what I thought was dogged, purposeful speed, I was yelling at him, “Wait… What?! What is he…? Get back! You’re a defender you IDIOT! Who the HELL do you THINK YOU ARE (My voice was getting louder here)!? YOU ARE NOT MAICOoh! Wow! YES! Beeyootiful header!” Ah, the fickle finger of fandom.

I thought the second half was really a slog. Whatever wind was in the sail of Lazio in the first half – and they created a few chances, if the finish was lacking - was pretty much gone by the second. Thiago Motta, the Martyr of Barcelona, had a nice first half of passing punctuated with a thunderous attempt at goal that Muslera had to stretch out at length and altitude to save.

By the way, why does every keeper have his best game of the season against us? Is it written in their contract, or something? Man alive is it annoying. When was the last time a keeper had a howler against us, like that Atalanta dude did for Roma?

Anyhoo, Motta, who as mentioned, had a nice first half, nodded in a nice header into the corner off a corner to seal the game. You can say anything you like about Thiago Motta, and Calcio Gods know that he’s no saint, but he has the technical ability – and a chip on his shoulder the size of Wisonsin - to be quite a very good player for us… if only he wasn’t made of glass.

The game pretty much degenerated even further from there to time wasting passes and tackles so dainty, everyone made sure to hold up their pinkies as they happened. No one wanted an injury and no one especially wanted yellow card accumulation. Cambiasso picked up a justified, dumb yellow in the first half, but he’s safe from a ban in any case (he only has 2).

As far as the fan bullshit - and that's all it is, bullshit -I am not really surprised that the English media and the Roma supporters don't get it. From what I have been told, Inter and Lazio fans have been allies since Mussolini tried to eradicate Inter (not nationalistic enough, but only got us to change our name) and absorb Lazio into a conglomerate team that would be AS Roma. The two sets of fans, being empathetic to each others plight and fight for keeping their identity, formed a natural alliance that has only gotten stronger in this past decade or three through player transfers and collective "fan trouble" from Roma supporters. Officially, according to wikipedi which I am hesitant to believe, the alliance started in the mid 80s, when Ultras became more organized. Add in all the crap that Totti has taunted the Lazio fans with, the most recent being very fresh in the mind, and no one should be surprised at what the fans decided to do. If you can't eat the entree of victory, then the soup and salad of revenge, at room temperature, is good enough.

So, next up we have the Coppa Italia final which take place in Rome. Word is that Mourinho is keeping the team in Rome for the next few days. I have no idea what to think about this game. I can see it going a couple of ways, but in the end, what’s really going to matter for us is if Mourinho can motivate the players for this game. I think that we can make some chances against this Roma defence. Whether or not we will put any in… that’s the real question. Our last game with these guys had 3 shots bounce off the woodwork. I have to say that I have a lot of faith in our defence after last week.

As a side note, the Primavera Team won their group and head into the playoffs for the Primavera version of the Scudetto. Leading scorer for the team is Mr. Right, Mattia Destro, who some might remember from the World Soccer Challenge this past summer. 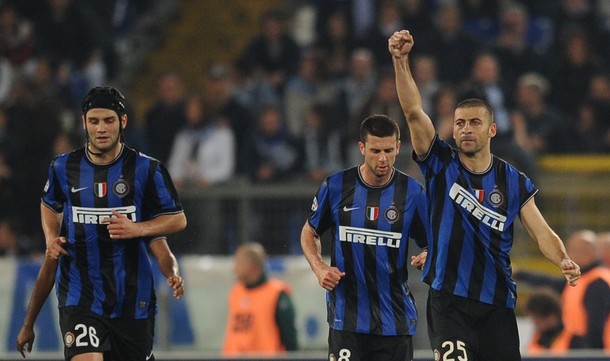