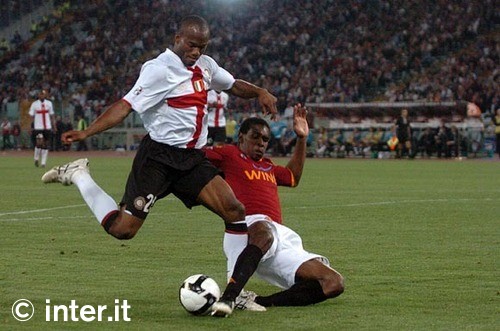 The last four out of five Coppa Italia finals have come down to Inter v Roma. It was becoming so ubiquitous that last year both teams were purposefully put in the same bracket just to make sure we got a different final (and wasn't Lazio v Sampdoria a refreshing palette cleanser?). Well, the TIM Cup (named for its sponsor) has fallen back to old ways and so the now practically traditional match-up is back. With Inter and Roma locked in a battle for first place in the league, this game will be about so much more than a trophy. Big time bragging rights are on the line and Mou wants them - badly. Of course, so does Ranieri and neither will go down without a fight.

What: Inter v Roma, Coppa Italia Final
Where: Stadio Olimpico, Rome
When: Wednesday, May 3, 8:45pm local time (11:45am pacific, 2:45pm eastern)
How to Watch: GolTV has the American broadcast rights to this competition, I think. Check there for TV. ESPN360 has it live as well. If none of that works, find a stream: MyP2P, Rojadirecta, Ustream, and ATDHE.net

I dont know if anyone else has noticed or not, but every game we do a Liveblog, Inter gets a good result. True, we lost that Barca game, but we still went through. Unfortunately, I cannot run one for this game as I have to be at work. Through the kindness of his heart and the love for this team, our friend Kirby has said that he will run a liveblog on his board on ESPN starting 15 minutes before kick off. Hooray. 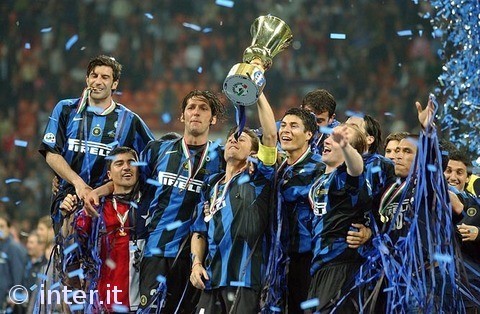 See, doesn't that look like fun? Dont you want the team to get to do that again?

Ok, with the exception of last year's breath of fresh air, Inter and Roma have been at each other over this trophy for what seems like forever. This one is special, though. If Roma win this cup, they, like the Sneetches, will finally have stars upon thars. They will have accumulated the requisite 10 wins that would allow them to sew a silver star upon their kit. Given that a star for 10 Scudetti is still at least 6 years away (7 depending on the next couple games), the star-lovers among their fans will totally want to jump at this chance.For Inter (with only a measly 5 wins to our name), this is the first step of an historic achievement - one prong of the fabled treble. Besides, we haven't won this thing in like three years, we miss the cool bulls-eye patch that comes with it.

Of the four times Roma and Inter have gone to the finals, Roma has won the tourney twice and Inter twice, although as this used to be a two-legged tie, the teams have met 7 times: 4 wins for Inter, 1 draw, and 2 wins for Roma. Unfortunately, one of those Roma wins was a total smackdown (6-2, ouch) which, even though Inter won the return leg, was more than we could overturn.

The other Inter loss was the year before last and the first year of the single-game final, and even though I have reviewed the game recap, I dont remember a thing about this game (and I am sure I must have watched it, didn't I?). I suppose I could probably dig up some highlights of that game, but how fun would that be (not very). Instead, how about these from years when things finished a little better for us (thanks for the research, Mickey), Leg 1 from the 2005 final:

I love watching these older recordings. For a real walk down memory lane, try this quarter final matchup between Inter and Roma from 1990. Yep, that is Walter Zenga under all that hair!

According to La Gazzetta, the atmosphere in Rome surrounding this game is explosive. The Lazio fans, not content with cheering on Inter against their own team just to spite Roma, have said they will come to this match to support Inter as well. Or, perhaps more accurately, to cheer against Roma. The city has responded by reducing the number of available tickets by 15,000 and will be beefing up the security (1000 police officers and 600 stewards). Basically, the city is afraid that the Lazio and Roma Ultras will take this opportunity to continue the fighting from the last derby. Unfortunately, Inter is sort of stuck in the middle. It is a terrible situation. As an Inter fan, I appreciate the support, but I prefer that Inter fight their battles alone and on the pitch. Of course, I dont think any of them are likely to read this so I will just have to hope that the authorities are able to keep the peace should anything happen. 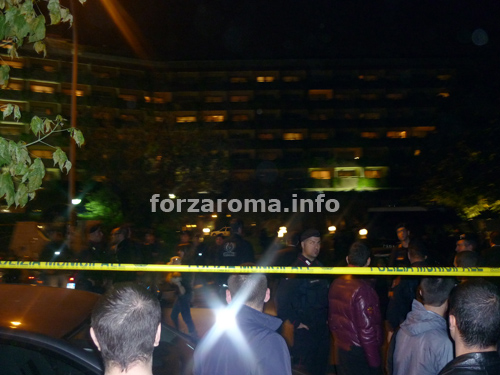 See the classy Roma fans banging pots and chanting under the windows of the sleeping Inter players? How classy!

It looks like the authorities were right to worry about bad behavior from the Roma fans at least. A group of about 100 or so has gathered at the hotel Inter is staying at in an attempt to keep the team from sleeping. They are banging pots and singing anti-Inter chants. Well, at least they haven't stabbed anyone... yet. It is nice to know, though, that after all the recriminations, that Roma's fans have only the most Corinthian notions of Sport. 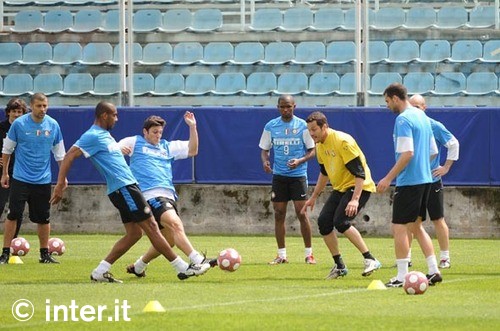 Mourinho took the whole squad to Rome for the Lazio game, then kept them there in order to train more and travel less. The squad has been training at the Stadio Flaminio, a small stadium just across the Tiber from the Olimpico.

After training today, Mou, Oriali and Paolillo reportedly took a trip to the Vatican, while some of the boys went to the zoo or shopping. Apparently tourists got a treat when Sneijder, Muntari, and Balotelli were seen shopping on the Via del Corso. In any event, the pitch seems to be nice in the stadium and bonus, Mou is back for a presser (hooray!). And, thanks to the joys of YouTube, you can watch the whole thing (1, 2, 3, 4) plus Zanetti's (1, 2).

Or, there is always the official English translation.

Basically, Mourinho said nice things about Roma (they play quality football and are lucky to play the final in thier home stadium), reiterated that last Sunday was a real match that everyone took seriously for him and his players (after all, both Sneijder and Lucio are out of the this game because they played against Lazio), and that the Coppa Italia is a real tournament that he and his club respect. Oh, and he refused to say he was sticking around for another season (looks like it is back on the coach merry-go-round for Inter - sigh).

Ok, so the call-up for Lazio is the same as the call-up for Roma (all hands on deck!). Basically, everyone is available accept for Lucio (ouch), Sneijder (double ouch), and Santon (poor kid). They are all injured. We have no suspensions. Of course, with everyone available, that means Mou could play this any number of ways. Without Sneijder, though, I hope he doesn't try the 4-2-3-1 formation - I just dont think Deki can pull it off, but then I have ceased to try and second guess the man 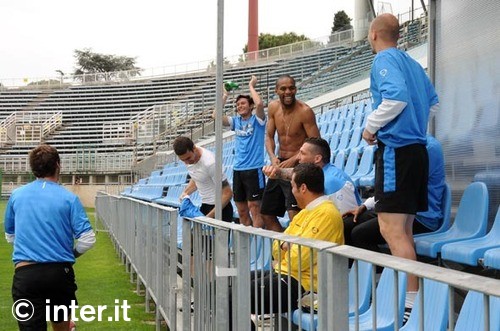 A moment of shirtless levity during training - I dont know how I missed this before.

I also hope Julio Cesar is feeling better today than he was last month and that Milito and/or Eto'o have their shooting boots on because I would really like to win this one. I know, of the three competitions on the table, this is the least prestigious and there is some talk of saving our strength for the bigger fish to come, but I think that is coward's talk. I think that now we have made it down to the end, we need to see the competition through in the same manner in which we played - with respect and to our highest ability. Look, I have nothing specifically against Roma the team. True, some (not all) of their fans are the most annoying, joy-sucking, hateful people I have ever interacted with, but I can hardly hold that against the club - they dont choose their fans. And I think they have a talented squad: they have had a spectacular run in the Serie A and already beaten us once this season. All that said, though, I think, player for player, Inter has a better squad (cue the annoying joy-suckers). I think we can beat them tomorrow. I dont know if we will, but I think we definitely can, and antics like the banging pots outside of hotel rooms just goes to show that there are some Roma fans who have the self same thought.

On a completely other note, it looks like Quaresma may be on his way to Turkey to play for Besiktas. That seems like an odd move for him, but I suppose it could be true.

Oh, and on an even better note, Annie Leibovitz has photographed some of football's "biggest stars" - IN THEIR UNDIES! The photos will run in the June edition of Vanity Fair, but here is a little teaser featuring our own Sulley Muntari and Samuel Eto'o. WOOF! 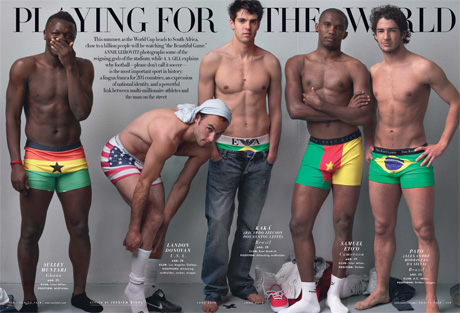