Share All sharing options for: End of Season Report: The Second Point Five 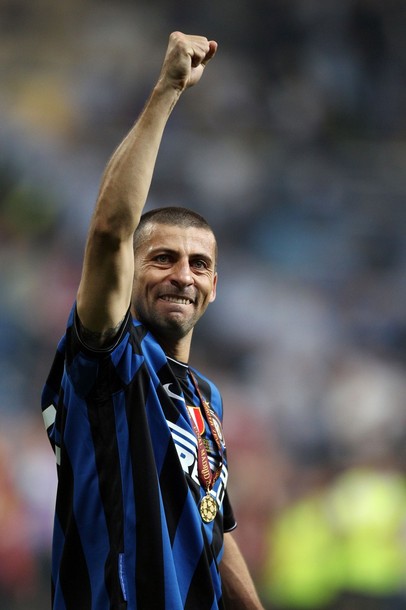 This is the second post regarding the defenders, the backbone of our team. Next up, the midfielders. 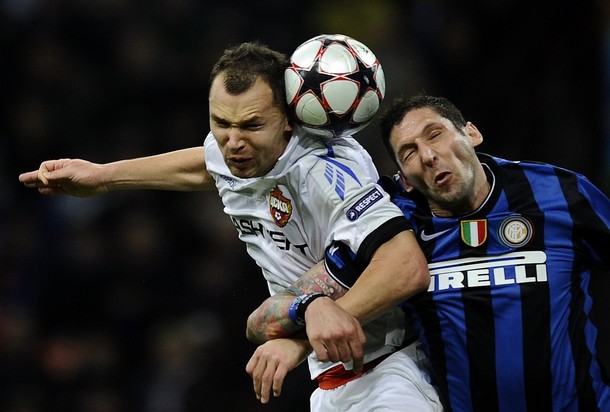 Materazzi: 12 Serie A appearances, 4 Coppa Italia, 4 Champions League (4 yellow cards)
Marco bleeds black and blue and and for me, that goes a long way to cover for some of the obvious failings that have been creeping into his game since he had that terrible injury 3 years ago. This year, with Santon out injured most of the season, he was called into action more than last year - and not to entirely disastrous results. I think those last few minutes on the pitch in Madrid was sort of a reward for everything Marco does in the locker room and behind the scenes. Sure, his distribution is starting to fail him along with what little timing he had, but he still managed to bring it against Moscow and Siena on that last day. Plus, without his Coppa Italia contributions, our Treble may have only been a double. In all probability, next year will be his last on the pitch, and, despite all his failings, he is still a particular favorite of mine (and a good number of fans in the Curva). I will always be pazzi per Materazzi.
Grade: 6.5 (an extra half for old time's sake)

Marco Materazzi: Marco’s 9th season with Inter was his worst in terms of appearances save last season. In terms of his play, he probably had his best season since his magical 2006 season. I can only think of two bad games that he played this season and they were Bari and Catania – although he wasn’t alone in that last one. He played in all the meaningful games of the Coppa Italia and his contribution really helped out our efforts to win the Treble. Of course Marco’s contributions go further than the field lines. For all that he’s a polarizing figure amongst the fans, his teammates love him and there is a sense that he’s part of the glue and fighting spirit that holds this team together. 6.0 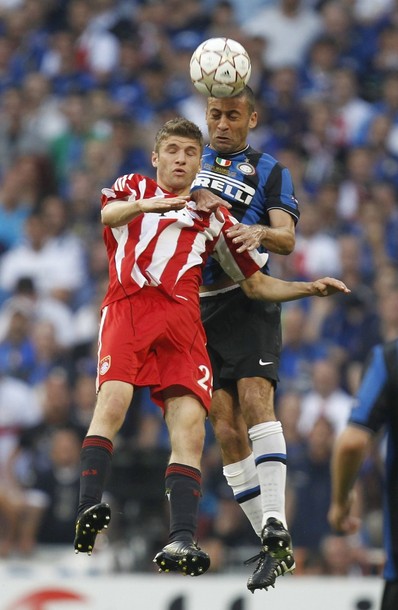 Samuel: 28 Serie A appearances, 1 Coppa Italia, 13 Champions League (13 yellow cards, 1 red card)
Walter is one of those quiet guys who keeps his head down and gets the job done. He has 4 goals this season, including that very important goal against Dynamo in the CL. I dont know what Mou told him, but this season The Wall was reborn. In fact, this season has been his most prolific season ever at Inter; he hasn't played this many games in a season since his days at Roma. In my opinion, he was our best central defender last season. He always seemed calm and in control, and, except for that strangeness against Sampdoria (once again, so much went wrong that it is hard to fault him for that game), he was exemplary. Now, lets see if he can do it again next year.
Grade: 8.5

Walter Samuel: The Wall returned to us for the first time since his knee surgery a few years ago. This was Walter’s 5th season with the team and he played more games this season than he had since playing in Spain. We were able to go forward with our more attacking formations because we were secure in the back with Walter and Lucio. Walter was a beast in the air and at times I was amazed how many times he selflessly threw his body into the path of a shot.

Walter was maybe the best in Serie A this season, but I had a hard time wrapping my head around Walter the offensive threat. I wrote about the conversation with my TV that happened during the Lazio game when Walter “drifted” (can a man that big drift?) forward in stoppages time and nodded in the game winner. It was also Samuel who was the unlikely hero of the Kiev home game when he made an absolutely beautiful heading goal. 8.0 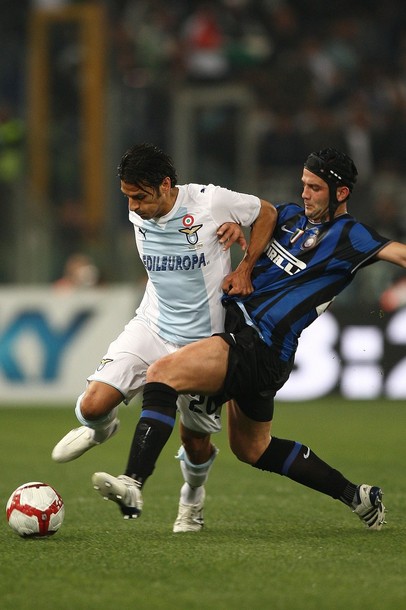 Chivu: 20 Serie A appearances, 3 Coppa Italia, 9 Champions League (14 yellow cards)
It is hard to knock a guy who literally had his head bashed in then 2 months later was back on the pitch. I suppose nothing motivates like knowing your name is on that Champions League list and you have a shot at the semi-finals, I guess. You could tell how cathartic these last few matches have been, considering just a few short months ago it was a distinct possibility that he would never play again. In terms of this season, I think it started out quite brightly: he was excellent in that first game against Barcelona. There must be something about Barcelona, because he was also excellent as part of the mighty plane that took Barca out the CL once and for all. The only real drawback to his game this season is that if he tends towards the professional foul a bit too much if he is having problems containing his man. He seemed to struggle a little more than Maicon in that respect, but Maicon always had Zanetti there to cover his back. I think he has overcome incredible adversity this season. Plus, he has always maintained that Inter is the club of his dreams - I like that.
Grade: 7.5 (have you seen the scar?!?)

Christian Chivu: I always got the feeling that Mourinho didn’t know what to do with Christian. I think that the plan for this season was for Santon to be the left fullback and for Chivu to be the backup fullback and center back. What actually happened was that Santon, Chivu, Zanetti and Cordoba teamed up to man the left fullback position. Chivu had his ups and downs this season the first Sampdoria and Juventus game come immediately to mind. Then came the Chievo game. As it turned out, I thought that his performances after he came back from the surgery were a lot better than before his injury. I really can’t tell you what Chivu’s role on this team might be next season. I know that the plan is still to let Santon grow into the position and there is a lot of transfer talk about a new fullback. I hope we still have a place for a very versatile player. 6.5 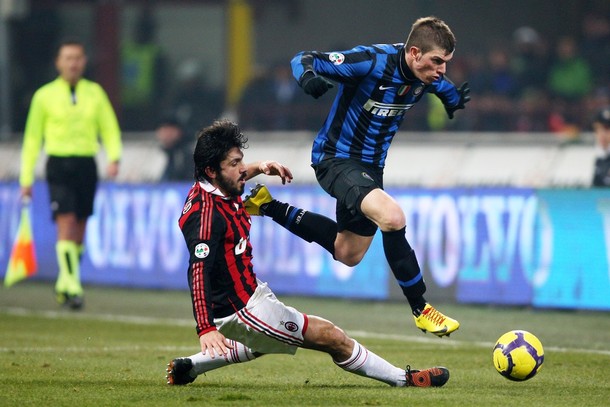 Santon: 12 Serie A appearances, 2 Coppa Italia, 1 Champions League (no yellows or reds).
Poor Santon. This season is one he will want to forget, I think. It began with a terrible case of Sophomore-itis and ended with two knee surgeries. I know he had World Cup aspirations this year (who didn't?), but with all that expectation to live up to and all those problems with injuries, it was just not to be. I hope he can take the season with a grain of salt and get right back at it next year. I still have high hopes for the lad. One thing I will say, though, is that when the team really, really needed him, he was there. We saw flashes of last season's brilliance in the home derby against Milan and against Juventus in the Coppa Italia. If he can finally fix his knee, I think next year will be a break out season for him, especially if we lose Maicon this summer.
Grade: 5.5 (he just could not find his bearings this season. I can admit when I am wrong, but I just dont think this was an acceptable season for him. I expected more, injuries aside.)

Davide Santon: Santon was the darling of the season two years ago. This season, not so much. He put in 15 appearances, two of which were for under 13 minutes. The thing is, I can only think of the one bad game that he had… yep you guessed it, the first Sampdoria game. What is it with that team? Santon will be a good player but we need to give him time to grow into the role. I hope that his knee problems are a thing of the past. It would be depressing to have another Marco Andreolli on our hands. 6.5 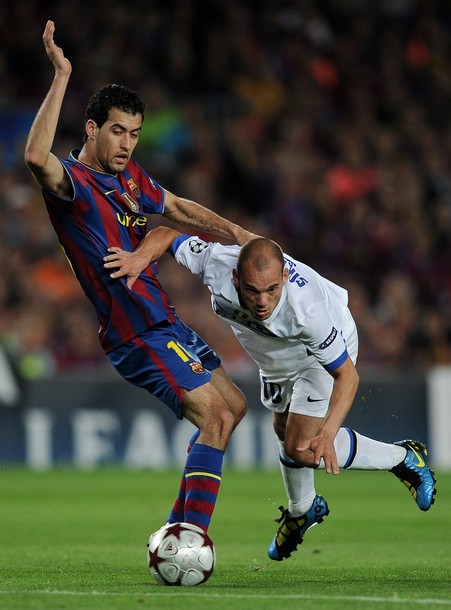