Today is the Big Day

Share All sharing options for: Today is the Big Day

Yep. Today is the day that Inter's new coach, Rafael Benitez, is official presented to the press. Boy, that still feels weird to type. Rafa had his first official meeting with Branca and Moratti yesterday, as well as a tour of La Pinetina. Hopefully Branca was able to convince him that Inter didn't need a revolution. Rafa and Moratti apparently spoke about cars.

Although the market has not official opened in Italy, there has already been some movement away from Inter. Our wayward winger has finally found a new home: Ricardo Quaresma may be going to Turkey to play for Besiktas for a reported €7.3 million. Well, that is if Ricky agrees to the move. If he goes (which he may not - remember, there were tons of offers last summer as well) it means Inter only lost about €21 million on the deal. Yikes. I guess Inter is optimistic that Quaresma will agree to the sale and everything should be finalized by the end of the week. We hope.

I wish him all the best and I will always wonder just what went wrong - we all had such high hopes. Was it that he could not fit into Mou's system or was he just not good enough to displace the other starters? I guess we will never know.

Real Madrid are still interested in Milito and Maicon. I guess they have actually made an offer for Maicon but Inter has rejected it as too low (rumor is it was about €28 million). Personally, I am of the same mind as Cambiasso, who, when asked about who could possibly leave Inter this summer said:

"I do not expect anything from the market. I would like, as I believe all Inter fan would, to keep all the players who have made this historic season, it is impossible in this moment to think of players who would leave after they have done everything they have done for Inter." 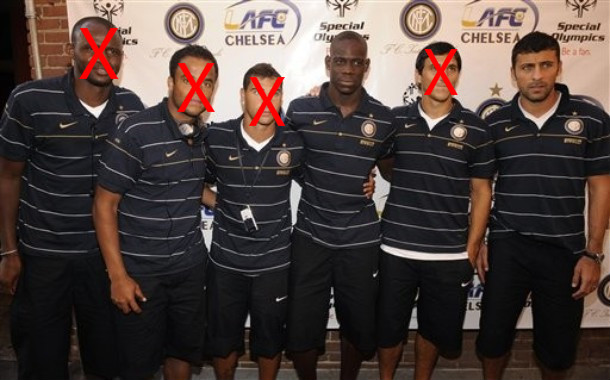 As we can see from this photo taken last summer, we have already axed the deadwood. Please, Mr. Moratti, cant we keep the rest?

It is pretty clear from the results that, by and large, Branca, Mourinho, and Moratti have assembled a winning combination. It just seems utter madness to chip part of that away and hand it off to a direct rival. I know, I said that last year with the Ibra deal, but the difference is, there is no other player like Maicon. As good as Ibra was, I dont think anyone considered him to be the best. Maicon is a different matter. I think one could make quite a compelling argument that he is the best rightback in the world. There are no substitutions. How can we let go of that?

As for Milito, he has become a fan favorite and I believe it would be a real blow for us to lose Mourinho and Milito - our treble heros - all in one fell swoop. I, for one, would be despondent. When I think about possible forwards to cede, I cant help but look to Eto'o. Sure, he made a great sacrifice for the team, but his salary is the highest and he will pull just as much as Milito. Basically, if the thinking goes that we already have one "point man" in Eto'o, then I say I would rather keep Milito, give him a bit of a raise, and sell Eto'o. Even with a couple million more, Milito would make half as much as Eto'o and I think the fans like him more. In a perfect world, I would keep both. According to La Gazzetta, they are all on the market for the right price, namely: 35 million each for Maicon, Milito and Eto'o; 40 million for Balotelli.

Well, I guess it will all become clear as the month wears on. There is no use crying over milk that hasn't even spilled yet.

As for Benitez... Well, Inter has spent years building up a reserve of suave, of cool sophistication and fabulous hair. Now though, well, when I watch recordings such as this I become a little distraught:

I am looking for a nice way to say this but, yikes, I just cant think of a euphemism for man boobs. Plus, no amount of vertical stripes could hide that... erm... girth, shall we say. I think it is clear that Rafa Benitez is sucking the suave right out of the club and he hasn't even started yet. Boy oh boy, he better be smart.

And then, there is this beauty from Bruce Grobbelaar (ex Liverpool keeper and bandiere). He said: "I am very sorry for Inter fans, Benitez's teams play the most boring football in the world and he spends huge amounts of money for useless players. For us Reds, [Benitez's] leaving is a liberation."

Oh man, it is going to be a long pre season. Basically, the only way to silence these critics (and my growing fears) is for Inter to start playing and winning.

I sure hope the presentation goes well. I need some good news.

Puppet Jose Mourinho has already weighed in on the subject. Not only is Rafa now called Mr. Scrap Merchant, but he also appears on the Pimp Board.