Share All sharing options for: End of Season Review: Part the Last 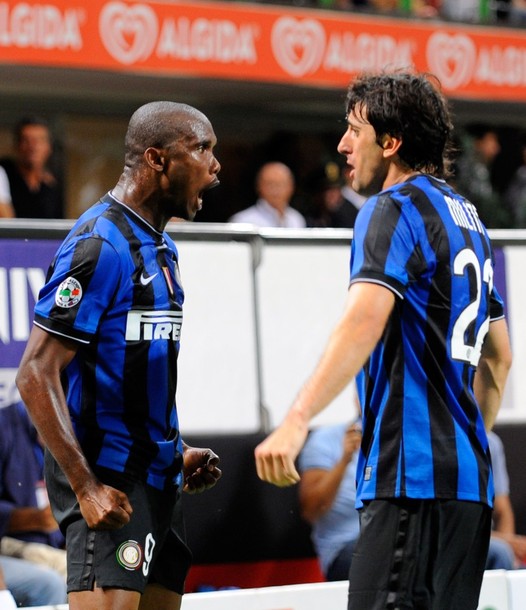 This is all about the forwards, the glamour and the pizazz. After this some transfer talk, new coach talk and maybe some World Cup talk. 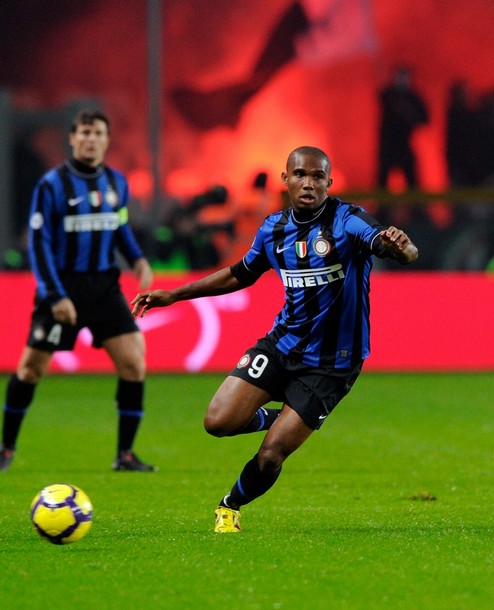 I was skeptical of Eto'o at the beginning of the season. I was never in doubt of his talent - his huge list of honors is testament to that - but it seemed like he really had no attachment to Inter as anything other than the organization that signed his ginormous pay check. That he would have gone to any club who would pay him 10 million a season and was competing in the Champions League. I still dont think he is emotionally attached to the club, but I have seen that he is professional enough that it doesn't matter. Even if we dont have his heart, he will still give his utmost to forward the cause of the team - even if that means foregoing personal glory. Though I am sure the 10 million helps. As for his performance with the squad, it definitely got better towards the end of the season. He struggled with a foot injury at the beginning of the season and invariably it takes time to adjust to a new league and team. When you add that to being gone for a month during a critical phase of the campaign, oh, and more injuries, then it makes sense that a player may not be at 100%. Even at a diminished capacity and playing out of position, though, he managed to get 16 goals and drive fear into the hearts of our adversaries. I have come around on Eto'o. He may not be seven and a half feet of rippled velociraptor (like a certain Zlatan), but he is pure class with tons of skill. Plus, he facilitated one of the most satisfying moments of the whole season for me: beating Chelsea at Stamford Bridge. I think I can live without a velociraptor on the squad after all.

Samuel Eto’o: My only problem with the Ibra for Eto'o deal was that we left the deal to happen so late. Eto’o ended the season with 15 goals in all competitions which isn’t bad for a forward in his first season in Serie A. It’s definitely tougher to score in Italy than Spain so I have confidence that if Eto’o stays with us then he will get more. Eto’o is so dangerous when he’s on the field, he’s always in position to score, he’s always working hard and he’s always drawing double teams it’s hard to find fault in his game. His willingness to sacrifice for the team at the end of the season as we were wrapping up the Treble is immense. He had a rough patch in January after the ACN but he came up huge in the Champions League which sparked us and him for the rest of the season. 8.5 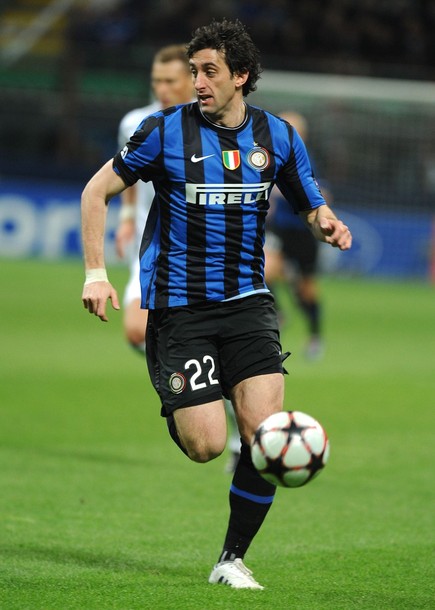 Ok, hands up - who saw Milito coming at the beginning of the season? I know I didn't. Sure, he tore it up at Genoa, but who knew he had all that utter fabulousness in him. Plus, he does it all with this incredibly endearing "aw shucks" attitude. Ok, he didn't make every goal on offered on the plate, but he did a great job none the less. He got 30 goals in all competitions, including the winners in the Coppa Italia Final, the Champions League final, and in what amounted to the Serie A final, the last game against Siena. Plus, he wasn't quite as wasteful as some may think. Of all our strikers, he has the best shot to goal ratio at just about 1 goal for every 4 shots in the Serie A (22 goals, 86 Shots). Eto'o is twice that (1 goal for every 8), while Balotelli is 1 for every 7. So, there you go. Milito is even better than we may have thought. Inter has provided the big stage so he could prove that he was among the best. Now I just hope it wasn't also a shop window. I hope Moratti gives him a raise - he is worth it.

Diego Milito: Last summer I wrote an article describing how much I liked this signing, even when it looked like several people didn’t. Milito showed last season with Genoa that he had a nose for goal that drove him forward and the will to work for those goals in a league like Serie A where scoring is tough. Milito scored 30 goals in all competitions – over 50 games - this season and he worked his ass off in each and every game. I saw Milito live at Foxboro and I have to say that I had a soft spot in my heart for the guy since. The incredible season he had with us makes that soft spot even bigger. It was an Epic season for Inter and Milito was the star at the top. By the way, he also hit 4 bars/crossbars. He was literally inches away from having 4 more goals. 9.5 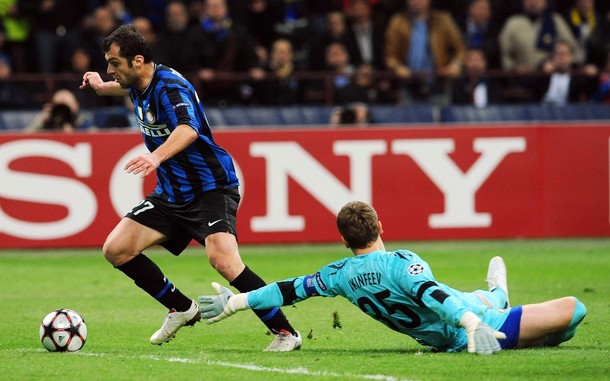 Pandev: 19 Serie A appearances, 2 Coppa Italia, 6 Champions League (2 yellow cards)
Goran Pandev was touted as the best signing this winter. He is pretty good, a youth product, and, best of all, free. Pandev didn't get all that many goals this spring (3), but I figure it is something to build on. Besides, he did score against Milan in the Derby - that always endears a player into the hearts of Inter fans. As for the rest, I just dont know. I guess my biggest gripe about Pandev is that he goes to ground a bit too easily. Plus, he tries to dribble through and draw a foul when he should pass the ball. In the CL final, I swear he lost possession almost every time he received the ball. That sort of irked me. I guess I want to like Pandev but I cant help but think that Balotelli is a better option (when he is behaving, that is). I guess we will have to see how much he plays under the new guy.

Goran Pandev: Pandev offers the team something that we don’t really have: someone who can use the dribble. He might do it too much at times, but he can keep possession in the final third like no one else we have on the team. Pandev can pass very well and he has a good shot also. He’s the perfect 2nd striker if we decide to play that way, or he can also play out wide, or he can play in the middle. Like Chivu who is as versatile as it gets in the back, having a guy like Pandev is a resource that is very valuable both in play on the field, formation versatility and depth on the bench. 7.0 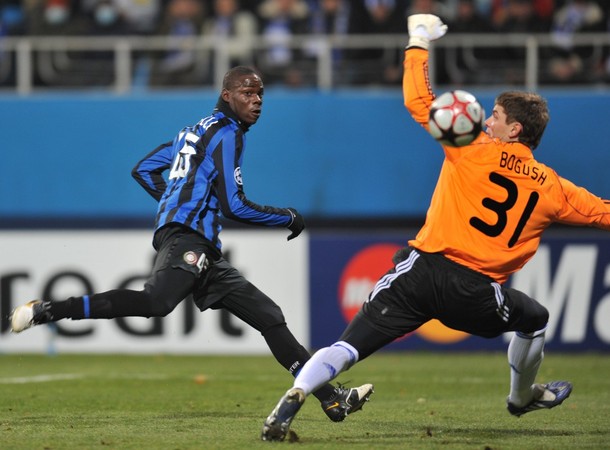 Balotelli: 26 Serie A appearances, 5 Coppa Italia, 8 Champions League (11 yellow cards, 1 red card)
So here is the deal, I fully understand that Mario is a bad boy. I know he does things that we dont approve of, but I also know that he is young and people tend to do some silly things. It is a brain issue - they can't help it. I am willing to give him another chance. For now. He made 11 goals this season, including 2 very important CL goals. He still has a tendency to go down a little to easily, but that is another one of those things I hope he will grow out of. Basically, if anyone is feeling a bit annoyed at the boy, just watch a few minutes of him playing when he is really on; all those bad feelings will just melt away. Besides, I think that by the end of the season he was already behaving in a more professional manner.

Grade: 8 (it would have been higher but for all those emotional problems he had in February)

Mario Balotelli: When people talk about Mario, what they talk about is his attitude or his personality. What they don’t talk about is his ability or the work that it took for him to get this good this young. Is he a good person? I don’t care. I don’t ask that question about any other player in Serie A so I am not going to ask it about Mario. Mario had a better season than he did last year. He played more games, he scored more goals and he was a much bigger part of the team. His goal against Chievo at home in the second to last game of the season probably saved our Championship Season and sunk Roma, something that he’s become pretty good at doing and that boosts his rating even more. No if can only grow up a little bit more before next season then we are good to go. 7.5 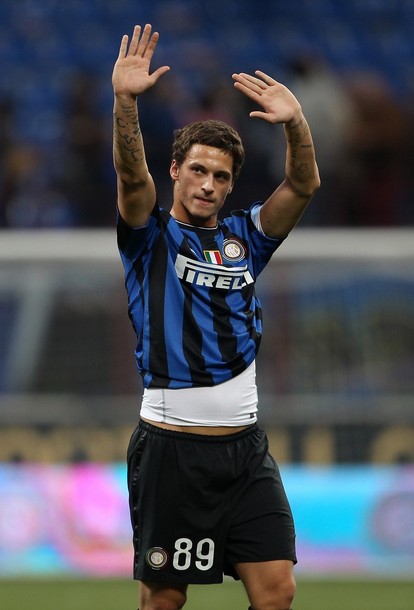 Arnautovic: 3 Serie A appearances
Wow. Marko actually played 72 minutes for Inter this season. His longest stretch was 49 minutes against Siena at home. And he wasn't half bad either. His next longest showing was against Atalanta (14 minutes). I think in that game is was mere inches from actually getting a goal. Clearly, he didnt get the requisite starts to force Inter to buy his ticket from Twente. I think that Inter still have first right of refusal - that is, I think Inter can pick him up if they want to at this point. I am thinking not, but you just never do know. After all, Moratti could hire Roy Hodgeson as the next coach and he could have some great need for giant, gawky, Austrian boys on the squad.

Grade: 5 (He didn't play and there has got to be a reason for that)

Marko Arnautovic: I am not going to say much about Marko other than to mention that I would have been happier if he had not been loaned and that Mattia Destro would have gotten some first team chances. Marko didn't wow me for the paltry few minutes that he had to show his stuff - and it would have been unfair if I had expected more. My point is that Inter has spent a small fortune getting it's Primavera levels up to snuff and it's probably high time that we used it as something more than transfer makeweight. I certainly didn't feel like we got a good look at him. N/A 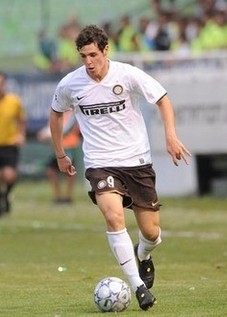