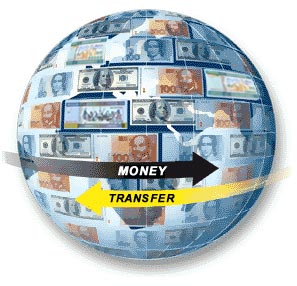 New manager, new players, the media is in a tizzy and the fans are nervous as hell. It's time to sort through this junk before the World Cup Madness overtakes us.

Players linked with Inter coming in: 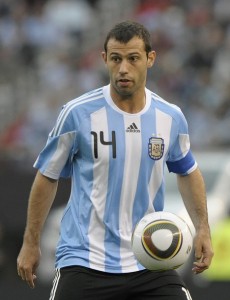 #1 with a bullet has to be Mascherano, the Argentine captain and midfield destroyer. Javier has been a player of Rafa’s since 2007 and is a hard tackling, tactical player – in other words, his skill set is a perfect match.

Javier does have his strengths. He’s been fairly healthy as he has over 100 games for Liverpool in his 3.5 seasons. He is only 26 years old and already has a lot of experience in Europe and in International games. He’s played in a lot of high pressure games and in a quality league with an unforgiving press like what would be expected of a player at Inter.

No player is perfect and Javier has his weaknesses. I don’t think that I like his passing too much – it’s too English, that is rushed and hopeful. I think that he’ll get a ton of cards in Serie A until/if he adjusts. He doesn’t score, so we are not talking about a well rounded midfielder here. He has been tapped up unashamedly by Barcelona in the past. Check out how much fun Arsenal is having with that situation. Lastly, he’s going to cost buckets of cash.

So, do I like this player and his skill set, but I don’t know if we need him – we do have Cambiasso, Motta and Muntari for this role - and I have a feeling that Moratti won’t pay the MSRP of around 30 million Euros. 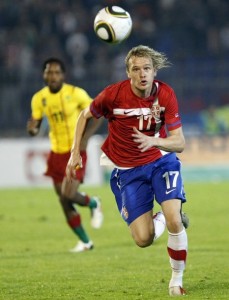 In the news lately has been Milos Krasic. Milos is a Serbian winger/attacking midfielder from CSKA Moscow who we met earlier this fall for one game when Inter was on its historic treble run.

As stated above Milos is an attacking player who can play either on the wing wide or closer in from a Christmas tree position. He’s young, not yet 26, and has been relatively healthy for Moscow playing in 146 games in 6 seasons where he has won multiple titles and league cups. He’s fast up the field and he has a nice pass.

Milos isn’t worth much on defense though. And he’s not a real prolific scorer either – his best season in Moscow was his last season and he had 9 goals.

Frankly, I think that getting Milos is a bit of a reach. I don’t know what our real interest is here, but this isn’t the first time we have been linked with this guy. He’s young and fast and is a good passer/crosser… but that’s really all he is. Is he another Quaresma? He fits that description. Personally, I hope it’s just rumor to drive up his price so that someone else can take the fall. 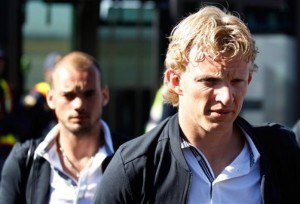 Kuyt is a 30 year old Dutch international who is famous for having horrible skills but incredible drive. He was a striker at one time but since has become a winger and at times a support forward. He has held up very well in the Premier League playing over 140 games since 2006. In that time he scored 36 goals, which I wouldn’t really consider to be a great total for a striker who is on the field as much as he has been – especially considering the fragile nature of Torres.

But he isn’t a spring chicken. There were concerns about Milto joining the club going into his 30s but Milito is a late bloomer if there ever was one. Kuyt has bloomed in the Eredivisie and has tailed off while in Liverpool. I think it’s safe to say that his best days are behind and not ahead. Besides, hard working forwards we have and I think that Liverpool would try to skin us since they are hard up for cash. 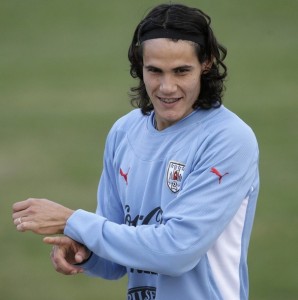 First let’s look at his positives. He’s a hard worker. He runs his butt off and he is relatively unselfish. He’s young, just turned 23 and he already has over 100 appearances for a Serie A team. He also had a hell of a season just recently and he looks like he’s starting to come into his own. Lastly, Inter and Palermo have always had a very nice professional relationship – even if it got a little rocky when Mourinho snubbed Zampa ina dressing room. With Mourinho gone, tensions hopefully have eased.

But last season, as good as it was for Cavani, was just the one good season that he has. When teams start planning for him that will be his litmus test – not when he just comes up and surprises people. And frankly, if he’s a one season wonder then we need to know that before we spend the 15-20+ that Palermo would want for him.

Having said all that, we have one striker that needs playing time to grow and make happy. Adding one more isn’t going to do us any good. And, he might be too young. We put up with Mario’s mistakes because he has proven to make good on them eventually. Can Cavani? If Cavani needs to grow, he’s better off growing somewhere else and then moving to Inter. Like Benzema, there is a lot more time for him to find his game. Time is something that we really don’t have otherwise we should use our own young attackers like Destro and Stevanovic. 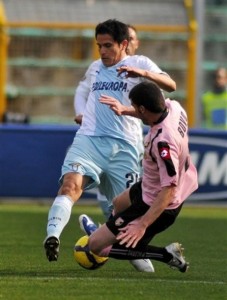 Cristian Ledesma is still in the Inter rumor mill. The feeling is that if Mascherano proves to cost too much then Ledesma would be an alternative.

Ledesma will soon be 28 years old and is more of a regista than a destroyer, although he has decent defensive skills. The best indicator of his ability was watching the mess that Lazio had become without him running the team. He is very sturdy and with the two teams that he played with in Serie A since 2001 – Lecce and Lazio - he had over 100 games with both. He has also been a leader at Lazio. He has a nice pass and starts a lot of the scoring chances that Lazio make and he’s decent at set pieces.

Cristian’s positives are also his negatives. He’s never played for a team that is as high profile as Inter. He also doesn’t score as he sits back and passes a lot. He’s not the midfield engine type either.

On the whole I like this player a lot, but it’s hard to see when he’ll get an opportunity to play, I mean is he better than: Zanetti, Motta, Cambiasso, Sneijder, Stankovic? On the other hand, he might be healthier than some. 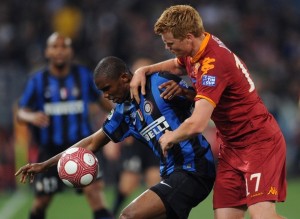 For some reason there is a rumor that Inter will exchange Burdisso for Riise. All I want to say about this is that if this happens, then I will gladly do another of these transfer rumor roundups next summer when we get a new manager… hopefully I would have stopped laughing by then. 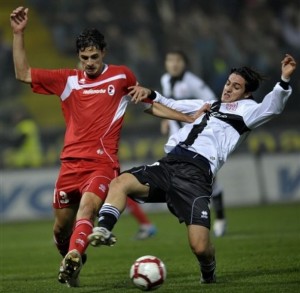 Criscito, Bonucci and Ranocchia are all going to be lumped into one blurb because their situation with their parent team and Inter are nearly the same. There has been a strong rumor that Ranocchia is already an Inter player conditionally, but there is no evidence of this and the rep for Ranocchia isn’t talking. Criscito and Bonucci are both defenders, both are co-owned by Genoa and both are wanted by Inter and Juve. Only one player would have a shot at regular playing time at either club – Criscito at left fullback. Inter have an excellent relationship with Genoa and both presidents are very friendly. If Inter want Genoa’s half of either of these players (assuming the co-ownership of either isn’t resolved one way or the other), Inter can get it. We can offer Genoa something that Juve can’t – payment plus quality/quantity players in exchange at any position that Genoa wants or needs. Personally, I am still not convinced of Bonucci, but I would love Criscito to come to the team and play either fullback or midfield on the left. I think that the deciding factor for both of those players is going to be personal preference, I doubt that Genoa can hold onto both for much longer. I think that Ranocchia is Inter’s for the taking assuming he rehabs well.

Sully Muntari has been linked to a move back to the Premier League, more specifically the ridiculous sounding Tottenham. I would be sad to see Muntari go but the reality of the situation is that he had a terrible season and it still remains to be seen whether his first wonderful season here was the exception or the rule. On the other hand, if Tottenham are willing to pay the price that we paid for Muntari – personally I thought that we overspent – then we would have to let him go and call the transaction a win.

Ricardo Quaresma is also linked with lots of teams, thank god. I thought that Ricardo had a troubled time adjusting to Serie A and that his injury at midseason was bad luck as he was starting to show some force of character. But it’s probably best that he move on and try to resurrect his career. The problem? He only wants to go to a big club, but there aren’t any who would touch him with a ten meter cattle prod because he had shown at Inter nothing worth a transfer. At any event, he needs to go.

Rene Krhin needs to leave Inter on loan. He’s never going to get the time on the field that he needs to develop here behind all the guys that we have and that are coming in. There are plenty of teams who would take him of which I can think of two – Genoa and Palermo - off the top of my head. As long as it’s a loan, I don’t care. If it’s a sale then I am not happy.

Maicon has been linked with Real Madrid all summer long, before the season ended. I love Maicon and he is one of my favorites on the team, but I am not worried about his going. First of all, I came to terms with it last season when his rep was being a dick. Second of all, I don’t think that he voluntarily wants to go. He’ll go if sold, but I don’t think that he’ll push. Thirdly, I don’t think that Moratti wants to/needs to sell. If Real come with 40 million Euros, Moratti will consider it, but thanks to Champions League money, I don’t think that we need a big sale – we have a transfer budget without selling.

Budisso was loaned to Rioma last season and he seemed to like it there. Rioma for their part tried to play hard ball with us during the winter mercato regarding Baptista cheesing off Branca and Moratti. Further the Rioma Sourpuss at the end of the season from the front office officially killed Moratti Zen. I think that despite rumors that laughably put us in the market for Riise – if this is true I will start the Benitez Sack Clock on that moment – Inter will make Rioma pay dearly for Burdisso, if they want him, in cash without a player makeweight. Moratti was a very close friend of Franco Sensi (they were both in oil) and it showed by all the deals that the two teams made together. I think that the friendship with that family died with Franco.

I am sure that as soon as I publish this, more rumors will hit the fan, but I think that this is enough to get us started. Stay tuned for the Official Benitez Welcome Welcome speech.

Player I wish Inter would buy: 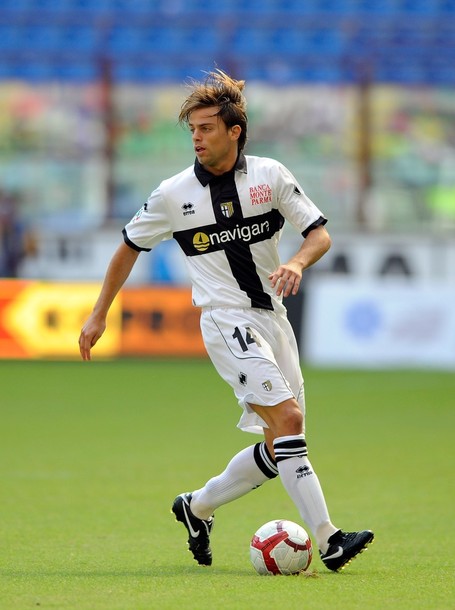