Inter 3 – Some Team That Didn’t Even Deserve to be in This Game Anyway 1: First Cup (Sorta) of the Season: Totti plays somehow and Inter has perfectly legal goal disallowed

Share All sharing options for: Inter 3 – Some Team That Didn’t Even Deserve to be in This Game Anyway 1: First Cup (Sorta) of the Season: Totti plays somehow and Inter has perfectly legal goal disallowed 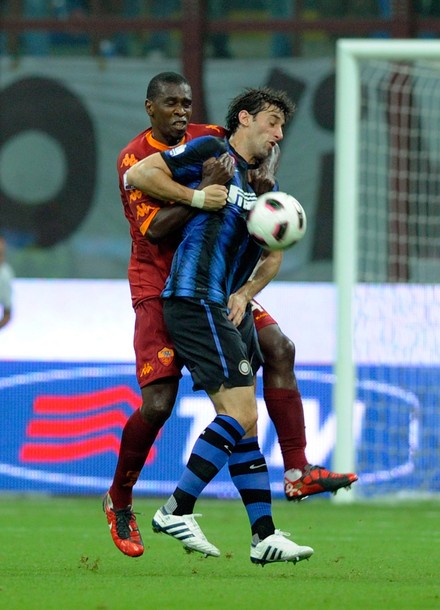 In other words, it’s a typical game with Roma. 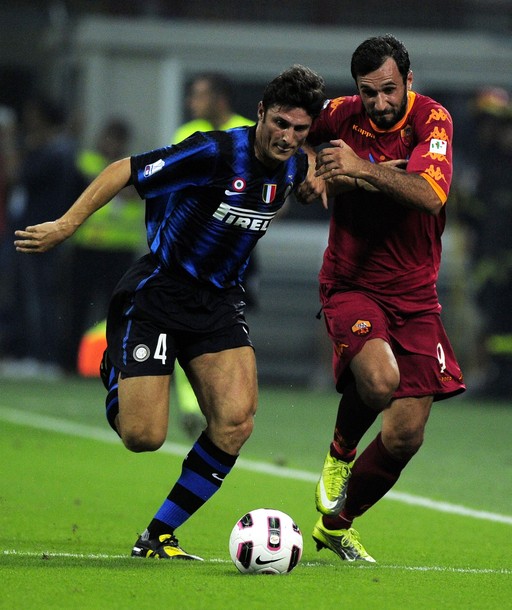 First the broad strokes: Roma shouldn’t have even been allowed to play this game. This is supposed to be a game between domestic Cup winners and Roma won absolutely nothing last season, as usual. It can only be poetic justice that they come away empty handed.

Totti should have been suspended from this game. But in an action showing us all exactly who is protected in Serie A (Totti made claims to newspapers this summer that the refs were protecting Inter, something that got Mourinho suspended multiple games last season only he said it about Juve which should tell you something else). Totti started the game from the kick off. Last season, in the losing effort from which Roma’s ass backwards inclusion to this game came from, Totti was red carded for a pansyesque and cowardly (read: typically Roma) move and was supposedly banned 4 games of the Coppa Italia variety. Which one could argue this is, being called the SuperCoppa and the Coppa Italia being a requirement to play in it.

So let's recap. Totti makes comments that Inter personnel get suspended for with no punishment. Totti is supposed to be banned for 4 (this is too light a sentence, like Juve and Calciopoli, the FIGC are lacking balls here) Coppa games, of which participation in this game stems. And he's on the field starting the game. Only in Serie A.

On to the game itself: Inter dominated possession, play, attack runs in the enemy penalty area and goal scoring chances. Outside of last gasp efforts terminally late in the game, Roma only had 3 real efforts on target at goal. One was a counter attack that Lucio made an error getting back letting Riise poke the ball past Cesar and was badly out of position for. The other was a free kick.

Inter penetrated several times into the Roma penalty area and came away with 4 legitimate goals of which only 3 were counted. 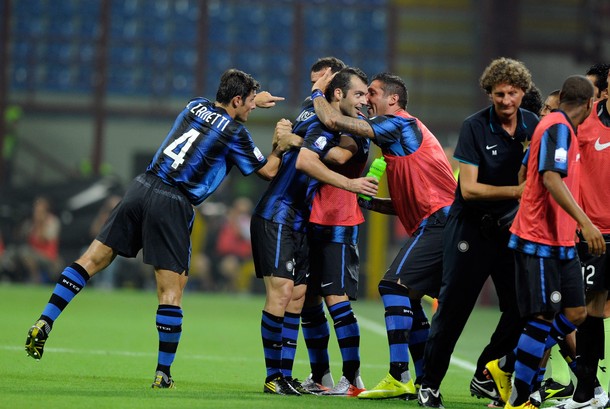 For the first goal, Pandev took advantage of a Vucinic mistake – what he was doing in that part of the field was some part of a master plan no doubt - I just wish I could understand the genius reasoning that this was a part of. Vucinic was about 2 meters from the end line by the corner flag and tried (I can't emphasize the word try enough here) to make a back pass - some would call it a weak cross - half way across the field to the goalkeeper in front of Pandev. I am no Roma aficionado, but even I could tell you that Vucinic could list his defensive abilities on the back of a postage stamp and still have space left over. But it happened and it counted... the same can't be said for every goal that Inter scored in that game. 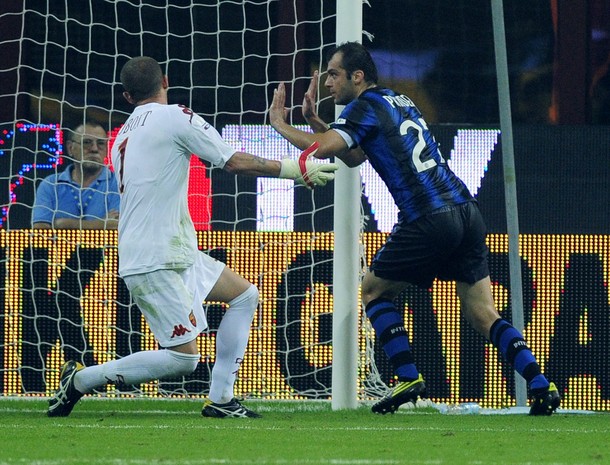 For the second goal – which wasn’t counted – Eto’o dribbled the Roma defense, again, and made a square pass to Milito, once the keeper was commited, who put the ball in the net. However the flag was up for offsides. Here’s the problem with that: Eto’o was on replay shown to be in line with the defense at the top of the penalty area when he received the ball – that is, he was onsides. When Eto’o passed the ball to Milito, Milito was past the defenders… but behind the ball, that is, he was onsides. Sooooo... like I was saying, typical Roma game. 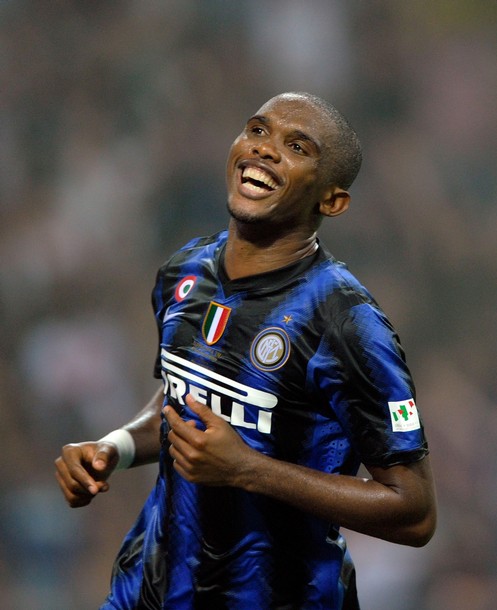 The third goal (second that was counted) was straight forward. Milito dribbled the Roma defense to the end line, crossed to Eto’o who beat the keeper and #77 (it’s the Roma defense, obviously whoever this is isn’t worth remembering) to the ball and tapped it in near post. 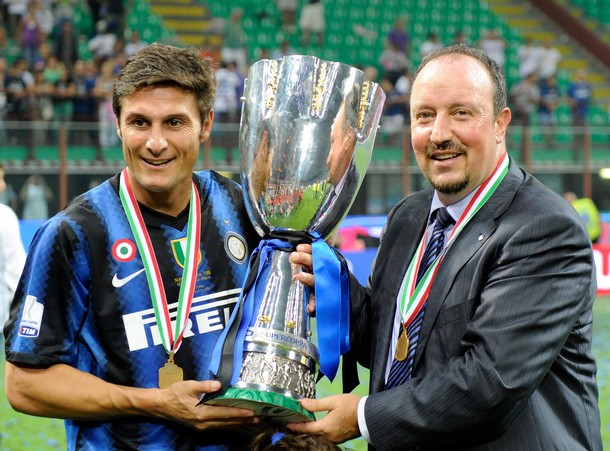 The fourth goal (third that was counted) was like the first. Taddei tried to dribble the ball out of his own end and got as far as Eto’o before he was dispossessed of the ball (that is, he got exactly 4 steps before he let the ball get away from him and it rolled to Eto’o’s foot). An Eto’o give and go with Sneijder to 16 meters from net. A near post shot with the keeper going the wrong way completes the move.

What is the best part of this goal? Sneijder nutmegs Mexes on the final pass. Priceless fun. Remember the Coppa game in May when Mexes and 2 friends couldn't stop Milito from scoring? 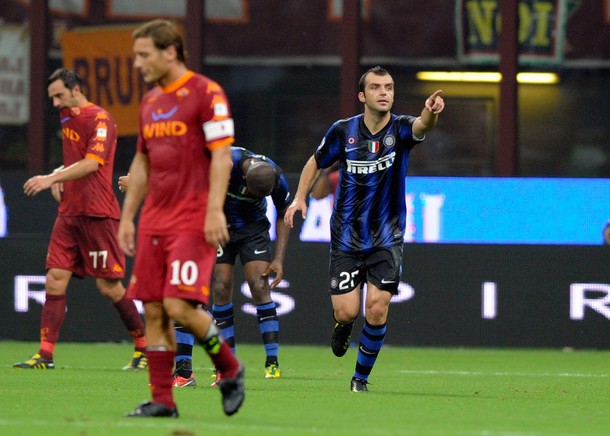 In between all of this was the typical fare… Roma players falling at the slightest of touches and then crying foul or penalty shot. Their fans were acting classy as always, finding new ways to express themselves since they couldnn't find someone’s ass to stab in the away section who wasn’t similarly armed. Menez rolling on the ground. Menez rolling on the ground again. Menez rolling on the ground again, longer, no one caring yet. De Rossi looking like he’s going to cry, like he’s sad to lose a game that he’s only participating in because they won't let us play against ourselves. Totti was shouting at the ref because Samuel shielded him off the ball while Totti pushed and slapped Samuel, the latter to his face - obviously Samuel perpetuated the most heinous of sins and played good defense against Mr Petulant. Ooooooooh the horror! THE HORROR!

Here's the best part: Ranieri is already making excuses (quick, Where is the most dangerous place on the planet? Between an excuse wielding Ranieri and a camera) that it was Roma making mistakes and not Inter being better. I have 2 things to say to this: A. Roma making more mistakes is a function of Inter forcing decisions - in this case, bad ones B. Roma only scored because of an Inter mistake... why should only their mistakes be excused? C. some one should tell Ranieri that the better team is the one that makes the fewest mistakes... duh. 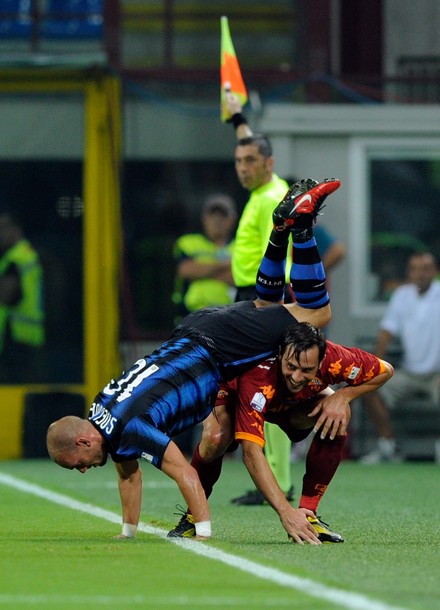 Analysis: What does all this mean? Not much. This is still too early in the season for Inter who are traditionally slow starters. This was the team that one might construe as the “starters” or main contributors, but the truth is that there is a newish system to learn and the oldish muscles, especially on the defenders, need time to get up to speed. I bet that the dressing room after this – the first real 90 minute action for the full starting group – will be rank with that unique smell that always reminds me of mintyness on steroids and words like “liniment” and “icy hot”.

More practically, we saw a much more attacking Inter. Inter played the vast majority of their game in the Roma end. There was a lot of flanking attacks and smart crosses on the ground, to someone, usually coming backwards slightly to the penalty spot vicinity. Our wingers were more than a match for the Roma fullbacks and as a result the center pair was forced to stretch to cover creating space. Defensively we made some errors that Cesar and Roma’s general inefficiency covered up. Chivu doesn’t look really ready yet, although his salute to the Roma crowd was great and completely warranted. Despite that, he has me worried, I mean he doesn’t look right. Lucio and Samuel will need some time like they did last season. Remember that we had “moments” like this early on last season too… the word Sampdoria comes to mind. Despite some “experts” here on the Offsides calling Cesar all washed up, he looked pretty good to me, like he wanted to erase a bad World Cup experience. Maicon was gifted acres of space on the right – I can’t fathom a game plan that starts with, “let’s give Maicon free reign…”

Eto’o looked washed up and we should sell him immediately. He was completely unmotivated and selfish. He caused a stir and had tantrums all over the place as he started the game on the right instead of being in the middle like he wanted. That kind of player we just don’t need. Oh and he was Man of the Match. "Sylvester" on the other hand missed what should have been goal #5 (#4 that was actually counted) on the night. More like eye of the pussy… cat.

As far as Benitez goes, the team looked motivated and prepared. The defense looked a bit shakey at times having to handle more responsibility but the attack looked competent and sharpish. I can’t ask for much more than that from the coach in his first game that “matters”.

Next up… what? Another Cup game, already? 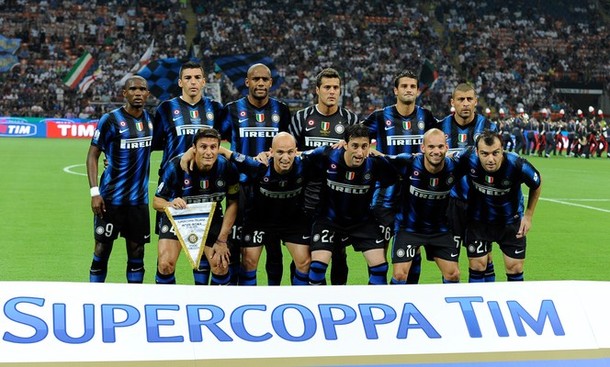