Bolonga 0 - Inter 0: Transfers and Bologna, It's a Meat Market!

Share All sharing options for: Bolonga 0 - Inter 0: Transfers and Bologna, It's a Meat Market! 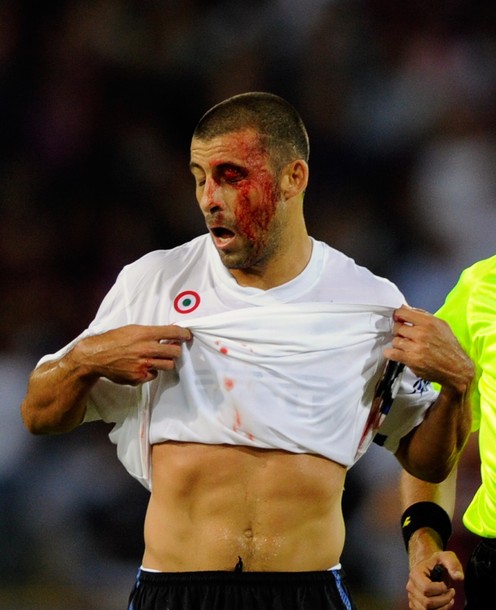 In this article I am going to attempt two things at once. I am going to recap the Bologna game and I am going to talk a little about Inter’s transfer season. They do share some connections. Both are disappointing on the face of things, both are nothing to worry about and both results are more of a good thing than a bad thing – but this doesn’t appear to be the perception by the supporters. Nevertheless I am sure that we will talking about the transfer season in depth in the week to come.

My Inter Player of the Match – just for being out there on the field at the opening whistle. I don’t know if anyone can tell yet, but I really appreciate players who work hard and remind people that this is a contact sport: 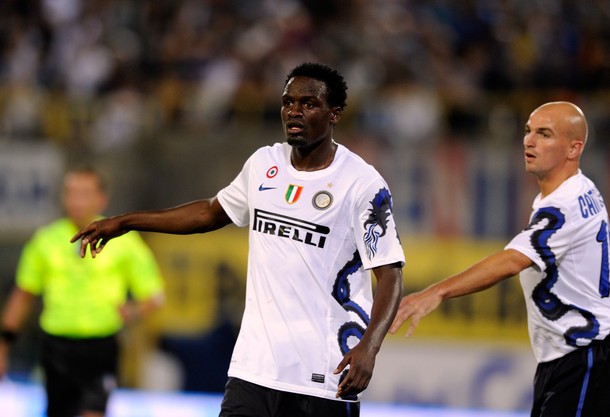 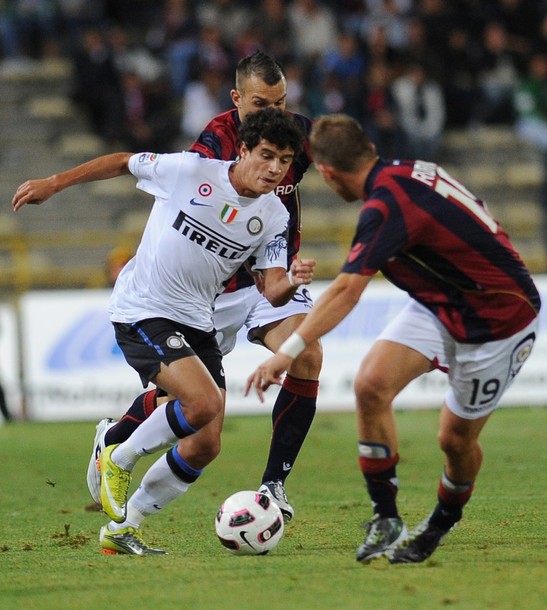 Cesar: Julio wasn’t bothered after the 60 minute mark when Di Vaio essentially got tired of running 50 meters sprints for an hour. He was in perfect position for a header to go right to him for close range – which proves how important having good positioning is. 6.5

Zanetti: He didn’t make me forget about Maicon on the attack but he was a much better defender. He made one or two trademarked runs in the second half. It was a very decent showing. 6.5

Lucio: To continue from last season, Lucio gets caught out of position at times. But he has to listen to Cesar (they got their signals crossed once) and he has to stop deflecting incoming balls right to the top of the penalty area. He needs to stop this because: a. if he’s deflecting them there that means that he’s not there to guard the area and b. if a bad guy is there, it’s the shot at goal with the best angle at either side = better % chance of hurting us. 5.5

Samuel: If this game is any indicator he is still our best pure defender. He’s hard to beat when he’s on your case and he’s not going to be shoved aside. Tough, gritty and good. It’ll do. 6.5

Chivu: Not as bad an outing as he had against Atletico, but not great. He’s got everyone thinking about Santon’s knees. 5.0

Mariga: Wow, did I think he just stole the show. Eto’o was more dangerous up top. And Coutinho made some nice moves, but Mariga was everywhere. He defended, he passed and his movement! He even had a decent shot that went just wide. When he made a mistake he busted his ass to make it better. He’s young and he’s going to have rough times – especially if he doesn’t curb the temper but I hope that we have the guts to keep him on the field. 7.0

Cambiasso: Cuchu doesn’t look like he up to speed yet. There were glimmers and he still bossed the midfield, especially when Mariga showed his lack of experience and he passed himself into a corner – Cuchu was there to bail him out. But the shot taking was… ugh. 6.0

Sneijder: He got a phantom caution and then he got the snot beat out of him. He better be ready, because if this game is any indication he’s the target that everyone is going to try to injure to stop us. Other than that, he had a decent game. He almost scored on a free kick that took a miracle to save. Toughness and good passing count a lot with me. 7.0

Pandev: Not the best game that I have ever seen Pandev have, but even still he manages to dribble into the box and put pressure. Too bad he didn’t do anything when he got there. I thought that he was rightly subbed @60 minutes. 5.5

Eto’o: The strongest forward that we had yesterday. He took 2 guys every time he looked at the ball and still was very, very dangerous. Had the best shot of the night that looked like it bounced off Viviano’s head and then off the crossbar before Viviano even registered the shot. He had another shot that looked like it was off just a bit before hitting the side netting. 7.5

Milito: It was a forgettable night for Diego. Time and time again you could see that the mind knew what to do but the body wasn't following directions. He probably could have been subbed before the 80ish minute mark but I couldn't argue that it needed to be done. The commentator on my feed was going crazy when this happened, which goes to show how little they know. I really can't think of too much positive that he did all game long. 5.0

Coutniho: I rarely grade the subs, because by definition they have less time to do their thing. But Coutinho had a very promising 30 minute-ish showing. He crossed the ball for Eto’o’s amazing Viviano’s head/crossbar miss and he worked with Zanetti go give a credible attack on the right that wasn’t happening with Pandev yesterday. 6.5 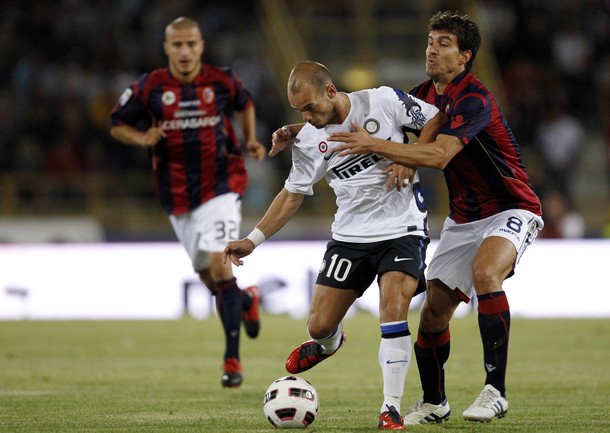 There was a lucky team and there was a dominant team. It just so happened that they weren’t the same team on Monday. Inter carried shots on target, shots off target, possession and corners. We just couldn’t score. Sometimes it happens like that… especially on opening day. I won’t bore you with yet more stats that you have already heard, but we draw often on opening day. It doesn’t mean anything. There are 114 points to be had this season over 38 games. No one will break 100, so everyone will drop points here or there. The important thing is not to lose too many and to keep calm.

I saw some positive things on Monday. For instance we were brave enough to use our youth with a game on the line. That would never have happened with Mourinho in charge. Santon initially saw the field in a Coppa game and because Mourinho had no other option. It was just a happy accident he was good. Since we are using our youth, maybe that means we will get to see Santon again some day.

Another positive thing was that we played better in the second half than we did in the first. Whatever was going wrong in the first half, Rafa was able to make adjustments. We were clearly better coming out of the dressing room and switching out Pandev for Coutinho and NOT Stankovic was smart and done at the right time. Milito has been off his feed and I have no problem with his substitution.

Here’s another positive for you – how about that game from Viviano? He was very good, probably the sympathetic vote for MOTM. The 24 year old keeper has been on Inter’s books for a year and a half now, since Jan of 2009. He was a part of Inter’s preseason in 2009 (here if you hadn't seen it) but he doesn’t want to sit on the bench waiting for an injury and I don’t blame him a bit. One day he might be the keeper for Inter and the National Team, like another recent Inter legend.

But this is where we really miss Mourinho – after a tough game that everyone is freaking out about. I don’t think that Mourinho was a great chalk talk guy and I know from watching practice that he wasn’t running the training. But what he did was to take the pressure off the players. And there is a lot of pressure on them right now. Why there is pressure, I have no idea. We have been the dominant team in Italy for several seasons. Even if we have a down season… it won’t be the end of the world and it doesn’t mean that we won’t ever be good again. It’s not like we don’t have the money to fix anything we need to. 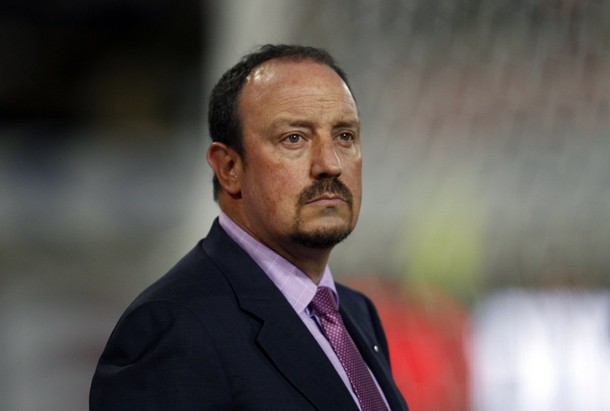 Get a blue shirt, damn it!

All of which brings me to this Mercato. Believe me I could and will spend a lot more time on this later in the week. People need to calm down about the lack of signings for this summer for a bunch of reasons.

1. We have a good squad right now. It’s not just good… it’s top 3 good. We should compete for the 2 trophies at home and we should do okay in Champions League. Should. Nothing is written is stone and bad things happen. But looking at this team, we should be at or near enough.

2. We have made signings. They were complimentary signings, not big name splashy signings. But they increased our depth, quality and decreased our age. Apparently the team age is important for some reason. We have only one player who could possibly take the field in either the midfield and 2 in the attack who are over thirty. The defense is old as hell, but then defenders play older. Like goalkeepers do… everyone should know that. Plus that’s also why we bought Ranocchia – which everyone forgets about. If he can prove that he’s recovered from his knee problems The Frog Man Cometh… next year. Plus… I am willing to bet that there is a player who came into Genoa this summer who will be ours next season, kind of how Cesar came to Italy through Chievo, for a price, only to be transferred to Inter later on.

3. Randomly buying players to make a new coach happy is one of the classic blunders. The most famous of which is "never get involved in a land war in Asia" - but only slightly less well-known is this: Don’t ruin your team for 4 years because of a Manager who only stays for 2. Or am I the only one who remembers the fact that Mourinho – you know, the guy that all of you are pining for like a dead parrot for the fjords - HAD to have Mancini. 3 summers later, Mourinho is gone, but Mancini is still here. I read that people are blaming Branca for this… should we be praising him for learning his lesson?

To be continued… later.