Inter v Bari: Another Bite at the Apple... er Chicken

Share All sharing options for: Inter v Bari: Another Bite at the Apple... er Chicken 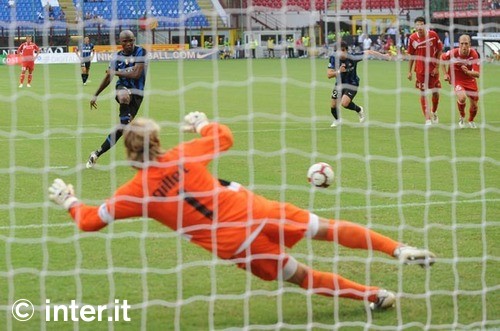 This week the Serie A scheduling authority has given all us fans the super special treat of a midweek game. Hooray. Yep, on Wednesday, Bari comes to town and Inter will have a chance to do something they couldn't do last year - beat them. While Bari was one of the happy surprises of last season, you probably wouldn't peg them as the nemesis for a team like Inter. You would expect teams like Milan and Juve and even Roma to be the itchy teams, the teams you just cant scratch no matter what you try. Nope, last season Inter beat all three of them, plus just about every one else (in one competition or another). Everyone accept Bari and Sampdoria. We will have to wait a bit longer to take on Samp, but tomorrow, tomorrow we can finally slay that chicken on our backs by taking out Bari.

What: Inter v Bari
Where: San Siro, Milan
When: Wednesday, September 22, 8:45pm local time (11:45am pacific, 2:45pm eastern)
How to Watch: Fox Soccer is showing this game delayed (2pm pacific, 5pm eastern) but you can catch i live on Fox Soccer Espanole and ESPN3. Other than that, find a stream: MyP2P, Rojadirecta, Ustream, and ATDHE.net

As I was saying, Bari was one of the break-out surprise teams last season. They finished comfortably mid table and put in some great performances like beating Palermo 4-2 and Juve 3-1. Of course, all that was in Bari. They only managed to win two games on the road last season (which is a bit shocking). Despite this, they held Inter to a draw both home and away. Which is really annoying. Even worse, the last time we met, way back in a 2002/3 two-match Coppa Italia tie they beat us home and away (!!). In fact, for an Inter win, you have to go all the way back to June 10, 2001 when a Recoba double was enough to take all three points. Basically, an Inter win against Bari is long overdue.

Last season Bari was our opening fixture, and as we all know, Inter likes to start with a draw. This one ended 1-1, after a converted penalty from Eto'o and a goal from Kutuzov. 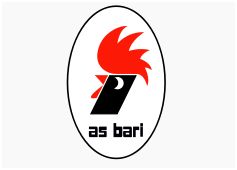 Anyone else want cornflakes? Mmmm... with bananas

Once again, there really isn't much to do here. Aaron and Mikey have brought the Bari board to life and I am sure one of them will post something about this game.

They were a good team last season, and although some players have come and gone, so far they seem pretty good again this season. They have 5 points after a home win against Juve, and a 2-all draw against Napoli, and a scoreless draw against Cagliari. And frankly, if they had a mind to, I think they could have won that Napoli game (at least that is how it looked to me).

Just like everyone else, the players say they are coming to Milan to show us up. A. Masiello (they have two Masiellos, you know) says that:

"[Inter] is still the strongest team... but we have no awe, we must go there with the usual determination, convinced of our means, only like this can we do well."

"Hello, Mr. Referee, over here. I would like a yellow card, please."

As a defender, he has, of course, been studying up on our forwards and he thinks he has a way to stop Eto'o. He goes on to say: "It is really hard, but you can stop him with the 'cattiveria' agonistica but then, there isn't only [Eto'o] to watch."

Um, I will admit, I have never come across the term cattiveria agonistica before but, it certainly sounds like he is saying that he will take Eto'o out with a bit of dirty pool. Cattiveria means wicked or nasty while Agonistica means sports or athletics... So I think Masiello plans on fouling Eto'o out of the game. Well, at least he has admitted it, right (can you preemptively card a player)?

Anyway, they are a fast team with good organization who have already shown they can cause us problems. Hopefully, Rafa has their number, though, because I really want to take those cornflake-logo-chickens down. 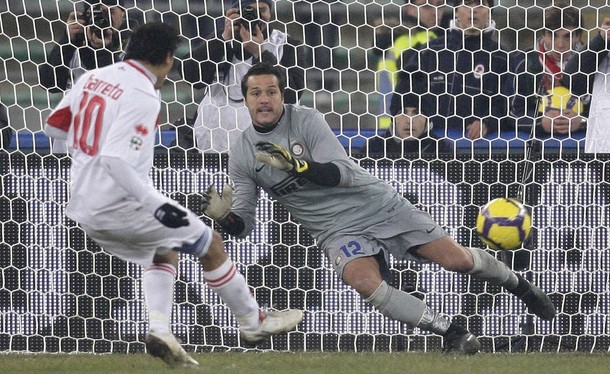 Last season there were three penalties awarded in the two matches between Inter and Bari. Are we in for more?

Rafa has called up 21 players:

Thiago Motta is still on the injured list, although he is expected back in early October. Presumably, Suazo and Mancini are still crap. It is strange to not see Zanetti's name on the list - unfortunately, the doctors have told him to sit this game out due to a mild post-traumatic pneumothorax from that ball to the chest he took in Palermo. Ouch. They told him to rest for a week, but I think they may have to tie him down to keep him away from Rome on Saturday. What do you bet he is at the stadium for the Bari game as well. 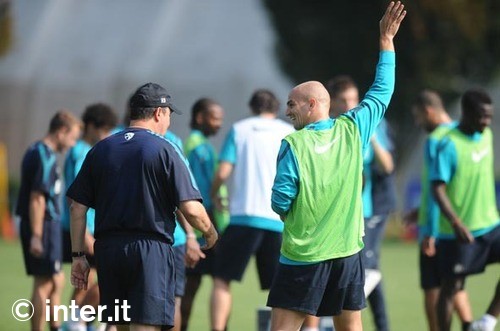 "Alright, the doctors say Zanetti can't play. Who wants to be captain tomorrow?"

There has been some chatter in the press about Diego Milito and his "crisis." Most recently, his agent, Fernando Hidalgo, had come out and said that the reason Milito is not playing at the same level as last season is because Benitez doesn't "psychologically protect" him the way Mou did. Hidalgo says that Mou made Milito feel like he was the best in the world, but Benitez, by substituting him out, has undermined Milito's confidence. I guess Rafa is not big on the naked shower backrub/pep talks.

Pre-Palermo stats for Milito. I am sure they must mean something.

Of course, Rafa was asked specifically about this in today's presser. Funny enough, Rafa says that there is no problem between him and Milito and in fact, Milito was surprised to read these comments in the paper given that he hasn't spoken to Hidalgo in a month. Rafa says that Milito is working well and it is just a matter of time. Seems to me, Milito worked harder than he ever has last year which was followed by a shorter holiday than he is used to. Add to that the fact that he didn't get as much pre-season training as he likes, and you can see we are all just going to have to be patient (Please oh please let the breakthrough be against Bari - fingers crossed, candles lit, sacrifice to Calcio Gods procured).

Benitez was also asked about the fitness of Santon and the ability of Chivu to deal with particularly quick players (like Alvarez). Rafa would have none of it. He did say that he would decide on Santon sometime today after training, but would not be drawn out to comment on Chivu.

Luckily for us, Chivu was around to answer his own questions (Palermo was his 100th game for Inter and the Inter Channel was doing a little special on him). He has no doubts about his (and the team's) ability do deal with Alvarez saying:

"We are always ready. We play to win, Inter always has done. Also, we're playing at home and we have to play like we can. Of course, our opponents have quality and we respect them, but we have to impose our game, so it's the others who should be worried. I played with Alvarez at Roma and I have played against him as well. He's skilful and fast. We'll see how it ends tomorrow."

Of course, all this leads us to formations.

Last game, no one was awarded the highly prestigious title of Grand Imperial Poobah of All Things Inter (otherwise known as GIPATI). I still have the lovely certificate (suitable for framing) which, should you win, would be sure to impress friends and co-workers alike. So we will try again. All you have to do is put yourself in Rafa's mind and predict the starting lineup and all that power and prestige can be yours. (Plus, the chicks love certificates!)

As for me, I think that with Zanetti out, Mariga will start in midfield (La Gazzetta thinks it will be Stankovic, but what do they know), so:

Hopefully there will be a Santon sighting and at some point Coutinho will get to make his San Siro debut. 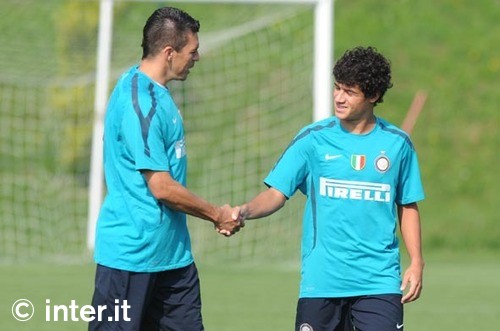 "So, you're that new kid I've been hearing about... Brazilian, right?

The team has been building in confidence, beating Palermo certainly helped, hopefully the team can put all those positive vibes to work for them at the San Siro tomorrow. A win would go a long ways towards bonding the team. Plus, I want to go into this weekend's game with a spring in our step and a song in our hearts. We have a whole lot going on in the next few weeks and I want everyone to be on top of their games. In the end, there really isn't all that much to say. It is all about the doing, now.

I am pretty sure this means Stankovic and Materazzi are going steady now. ♥♥♥ 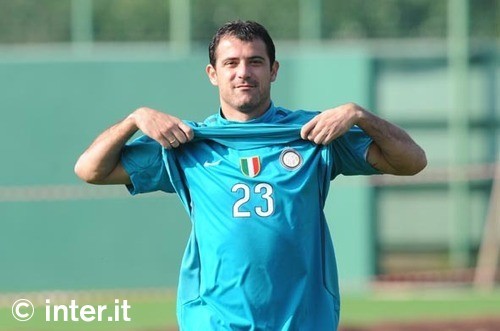