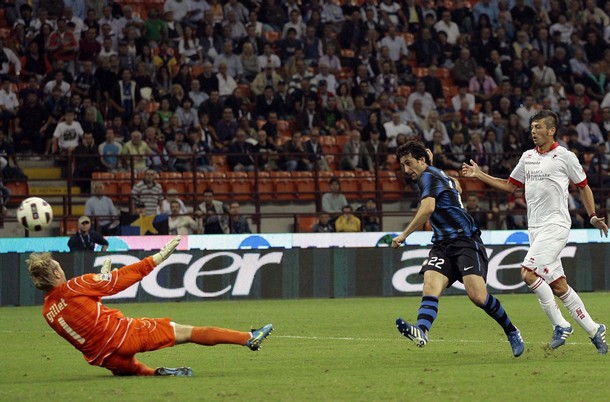 I’ve noticed in the comments section to the last article that some people are peeking at the table. I would suggest that’s far too early to start doing that. People can drive themselves crazy trying to foresee the combination of results with 34 games – and some 8 months yet to play. There are far too many games to play and far too many different things that can happen before now and then to change the table. For example, I haven’t seen anything to change my personal opinion that Juve, Milan and Roma won’t settle somewhere in the top 5 despite whatever their current positions in the table are.

If you have to keep track of something, I suggest that you keep track of earned points out of total possible and goals scored divided by games played. Right now Inter have earned 10 out of a possible 12 points. And right now Inter have scored 8 goals (0-0, 2-1, 1-2, 4-0) in 4 games. Two goals per game is a great average for us because we have a very decent defense so in many cases 2 goals will get us points. 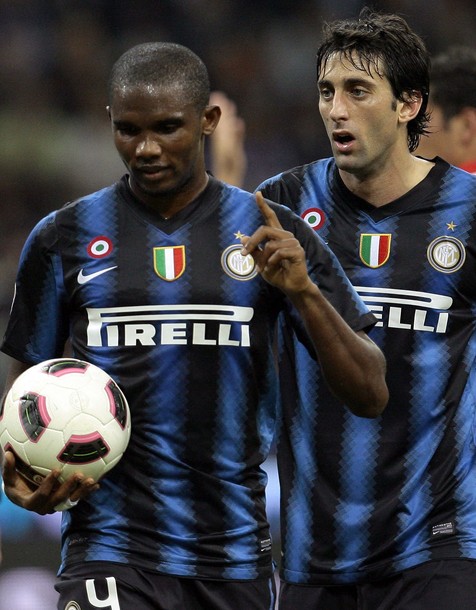 Cesar: He wasn’t called to action vey much. I think he had 3ish saves, one of which was pretty darn good, but he was available for pass backs and I think his distribution was excellent. 6.5

Maicon: He nearly scored on an Eto’o cross and he kept his zone pretty well patrolled. His passing was typically excellent and he’s working better with Pandev but there are still some rough spots there. 6.5

Lucio: Was criminally out of position in the first 20 seconds or so… but got his head into the game after and was very solid. 6.5

Cordoba: I know that Samuel started the game, but he didn’t play most of the game. I was nervous when Cordoba came in. The weakness of our mercato is that we are short handed on useful and youthful centerbacks. Can Cordoba do it over the long haul? I hope we don’t have to find out. There was a mistake on a cross that he flubbed, that made me catch my breath. I was surprised that he wasn’t given the armband when he came on. 6.0

Chivu: I have been very vocal about my disappointment in Chivu this season, but he had a very good game today. Everyone was ready to write Chivu off because of the Bari speedy right winger, but Chivu was focused and sharp on the left flank. Excellent job. 6.5

Stankovic: Deki has had two very good games in a row inside a season that I was sure he was going to prove how far past it he was. As a distributor of the ball in the deep midfield role, he can totally do this job. I still think that his defensive ability is mediocre and I love Mariga’s range at this position. 7.0

Cambiasso: With Deki’s defensive disability it fell to Cuchu to harry and dog the midfield. This happens to be what Cuchu does best. I liked his performance today better than I had in any other game this season. I was surprised that he wasn’t given the armband. 7.0

Pandev: I am going to repeat myself and say that Pandev had his best game this season. Can this be the Gestalt Game? Is this the game in which the entire team just says, “AHA!” and now they finally get it? I don’t know, but Pandev showed a lot of great skill, good passing and poor shooting. 6.5

Sneijder: I was on the fence with Wesley’s performance today. I get frustrated when I see him shoot when he’s near goal without really looking up for the pass. After I count to 10 and cool off, I realize that he’s got to shoot when given a chance for 2 reasons: 1) There is only so much passing and setting other people up before you get resentful. Everyone needs the chance to be the hero. 2) A lot of his passes work because when he gets the ball the defenses have to come out and close down on him breaking up the set defense and gives him a channel to pass though. The truth of the matter is that his passing was pretty spot on and his vision was astounding. 7.0

Eto’o: I was in love with Eto’o’s game last season. He comes back to help on defense. He’s deadly in front of goal. He passes like a demon. There isn’t much that he can’t do in cleats and I have said how much I admire his ability so often that I am feeling a little redundant. But I really don’t care. I love his game. Today, if I was the defender that he just totally destroyed, I would be nearly suicidal. I haven’t seen too many players play the game I saw out of Eto’o today. He was amazing, astounding and incredible. Yes, this has turned into a fully bloomed bromance. It was a grand gesture to let him take the penalties considering how much he played and how hard he worked for everyone else. Btw, here’s some fun facts for you: Eto’o has scored in every game Inter has played this season (SuperCoppa, Udinese, Twente, Palermo, Bari) except 2 and he has 2 games in which he has scored a double (3 if you count the SupperCoppa). 9.5

Milito: It’s a testament to this team how hard they all worked to get Milito on track. Cuchu doesn’t get many chances to shoot but he gave up a look at goal to give Milito the ball in space in the area without a defender in his face. It would have been epic if he scored but he put it over… badly. When Milito finally did score it was because Eto’o damn near spoon fed him the goal. Eto’o dribbled past two defenders and placed the ball about 4 or 5 meters from the goal line and all Milito had to do is look up and let the ball bounce off his head into the net. Milito did a great job making the run, staying with Eto’o and gave him a target to pass to. The second goal that Milito scored was the goal of a fully confident and in form goal scorer. I can only hope that player returns on the weekend. 8.0

Yes, the scores are a little high, especially since I usually have at least one player in the 5s or something, but I really think that the guys did a really great job this game.

I just have a short thought on the second penalty before the serious stuff. I don't know how "bad" a foul it was, it looked like the knee might have been the culprit that actually caught Lucio, if anything did. But how moronic was it for a player to even get close enough to force the ref to make a call? Lucio is running out of the penalty area and is passing the ball out of the Bari third of the field. In short, Lucio is doing all the things that the defender wants Lucio to be doing... get the hell out of the way and let him do it, idiot and then you don't give up crappy penalties!

Gawds! Some people, you know?!?

Okay, there isn’t much left to say other than to say that Rafa really prepared the team well for this game. I think that a lot of us were looking for the 4312 formation considering the injury situation and Milito’s nonform status. Rafa didn’t realign the team to accommodate Milito, instead he counted on Milito to play well. Which, barring the scoring, Milito has been doing. 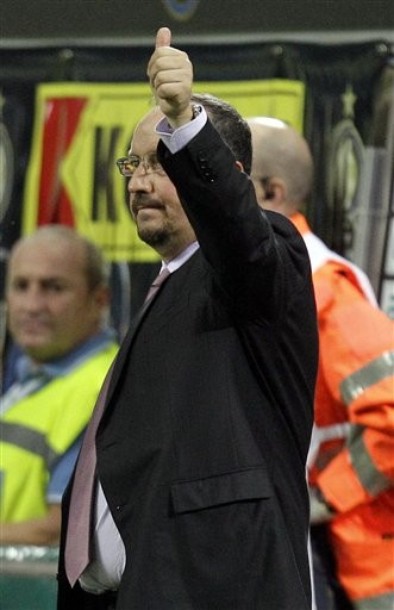 The newly attacking nature of the team is proving to be effective as long as we continue to play good defense. It’s actually a testament to our defense that we have been able to throw so many players forward. All that is bunch of Horse Hockey if we can’t use Samuel for any length of time. Without Samuel I don’t think that we are the same team defensively. Yes, I think that he’s that important. As important to our defense as Eto’o is to our attack? Pretty close. Am I predicting gloom and doom? No, but I am tempering my expectations in our next few games until I know how long he’s supposed to be out. This is the weakness of our team this season (last season it was midfield depth, this season it’s defensive depth). The next player on the list to take over for Samuel is Cordoba and I just don’t think he’s got it anymore.

So while I am feeling great for the win and the great performance the team gave, I am bumming because Samuel isn’t going there and I have bad JuJubees about Zanetti and him being off the field at the same time. 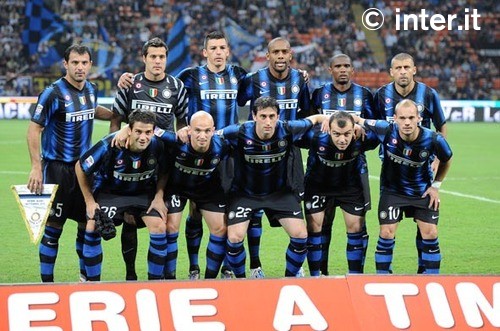