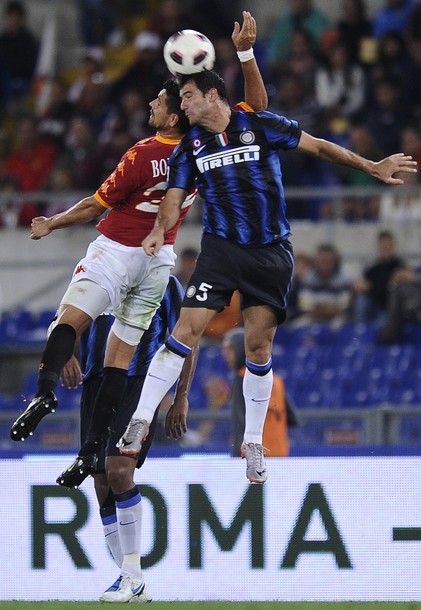 My Inter Player of the Game is capable of playing a game every week for extended periods of time, even multiple games in a week. He is considered a coaches dream and a great teammate. He has won multiple European Club Cups and is the Captain of his National Team. He has proven decisive in several games both with his club and national team. He’s like the Anti-… well you get the idea.

Cesar: Here’s the thing and I might be killed for this but I don’t care, Cesar should have gotten that cross before Vucinic even got to it. I didn’t like Cesar’s performance yesterday. There was a leadership vacuum on the field and Cesar needs to step up. He’s a vet of the team now, he needs to act like it and take control back there. 5.5

Maicon: Maicon didn’t have a great game. I didn’t see too many stops on the right, but he was mostly up against Perrotta who won’t cross and who rarely shoots just make short passes. Roma wasn’t able to do too much building from the right. On the other hand, I didn’t see the Maicon that marauds on the right either. 5.5

Lucio: Most of the game Lucio had a good game. His high kick on Boriello was probably a foul and a penalty but the real sin is that he didn’t connect with it – otherwise Boriello would have had blood or a mark or something, Lucio is a monster. He probably should have muscled Vucinic out of the middle of the box before the goal, but he was right there, it was just bad luck that he didn’t get there. 6.0

Cordoba: Ivan did a better job than I thought he would do. He was still able to out leap people for headers despite being about a head shorter than everyone and he exhibited his textbook toughness. As I said, didn’t do a bad job, but wasn’t great either. He was AWOL on the goal and therefore not in position to intercept. I thought that he made a terrible captain. 5.5

Chivu: On the one hand I can see where Chivu was coming from when he asked for more help – Eto’o should have been dropping more and Cambiasso was being held in the middle by Totti/Vucinic and Pizzarro. On the other hand, the yellow was his fault to start with. It was for a foul on Cassetti which, let’s face it, really wasn’t really warranted. It is Cassetti after all. Chivu complains about playing fullback? Great news, lets put someone else in. 5.5

Cambiasso: It was the most active I had seen Cambiasso for a while, but that doesn’t actually mean that he was particularly effective. He stole and poked the ball here and there, but I think that something is off with him. 5.0

Stankovic: Let’s be honest here, he was Inter’s best player yesterday, but that’s not really saying too much. He was active and Roma were lucky as hell not to be down in the 1st half with his shot that beat the keeper but just didn’t dip enough. Totti tried to start trouble with him as usual, and as usual Deki just stood there and defied the taller and much heavier Roman. By my thoughts there should have been more anger about the late, blatant kick to Cesar’s head. 7.0

Pandev: Pandev, who I thought had his best game last Wednesday had a bad one yesterday. Roma, like everyone else packed the middle of the penalty area and we need players like Pandev to break the 7 or 8 player mess in front of the goal. 5.0

Sniejder: Not a great game from Wes who is starting to take too many ill advised shots. He’s a great player, but his best move is the pass to Eto’o and Milito. When the first 3 shots go into row Z, it’s time to admit that it’s just not going to happen a pass the stupid thing. 5.5 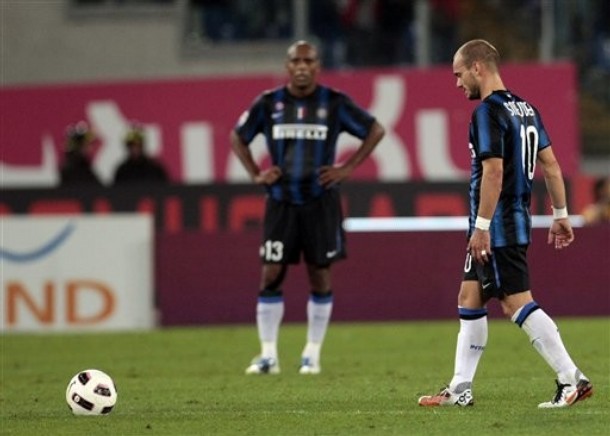 Eto’o: If we had a dangerous player in attack besides Deki, it was Eto’o who basically could beat Cassetti all day. Here’s what I don’t get, We know that Eto’o is going to get doubled and we know that Milito is going to get manhandled wherever he goes (check out how often Juan was grabbing and dragging Milito) why not let Eto’o beat Cassetti to the end line and make a pass back up field behind Milito to Deki or Wes cutting in at about the penalty spot? I would be looking for that move all day. 6.0

Milito: This was a terrible game by Milito. Terrible. I don’t remember a shot on goal. Yes, Juan was grabbing, pulling and dragging him around, but Milito should be able to do something about that, even if it’s just to whip his head or elbow back every so often just to discourage too much “friendliness”. 4.0 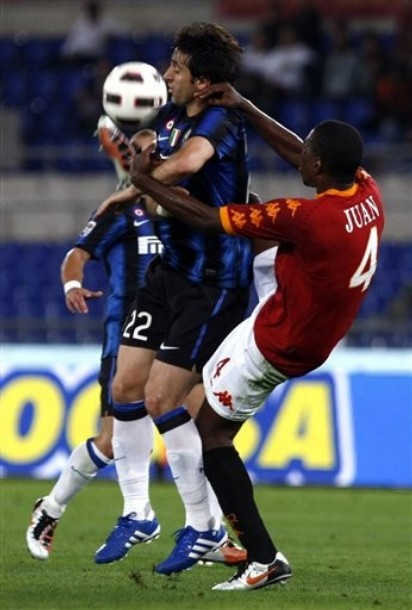 There was a lot of talk this midweek by one of these teams regarding all of the ref mistakes. Checking on several online and TV sources no one should be too surprised that there was a lot ref mistakes in this game: 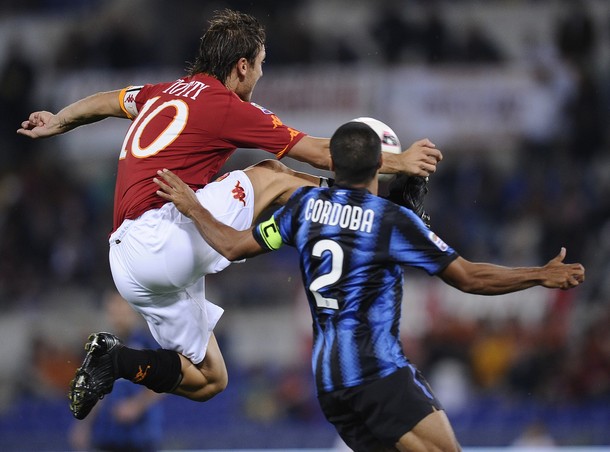 This isn’t a moviola but I am not forgetting about this one: Totti has yet not served a single day suspension for comments in the summer regarding the referees. He should have been banned for at least a game.

Boriello had 3 handling offenses not called. The most blatant had the entire Inter back line tapping their arms over their heads.

Boriello falls from nothing to no effect at the feet of Lucio and then throws his arm out to trip Cordoba.

Menez’s viscous tackle from behind on Sneijder was a straight red.

Yellow card and free kick on Cordoba not correct as he had possession of the ball and Menez shoulder checked him.

The Cassetti should have been called for a foul on Sneijder, instead Sneijder was called for the foul that led to the goal.

Lucio high kick that “hit” Boriello could have been a penalty.

Totti high kick could have been called for a foul.

Juan handling in the area as a shot bounced off his elbow could have been a penalty.

Perrotta kicking Cesar in the head long after the ball was in his hands. This warranted a straight red and multiple game expulsions.

Eto’o called for a foul on Juan not correct in the Roma penalty area.

De Rossi sliding into Eto'o as he shot the ball at the top of the penalty area.

Several instances of a ball going out of bounds and “given” to Roma incorrectly.

Before I get into the analysis I have something to hit first.

Exactly how fat and out of shape is Totti going to get before Roma will have to stop using those tight, stretchy Kappa shirts? Happily he turns 34 tomorrow. Also happily, he apparently has no idea about how small his playing range has shrunk to. His deterioration and eventual retirement is a win-win situation for me, personally.

I guess I could ask the same about Adriano but frankly, joking about his weight is too easy and mean spirited. He really doesn’t deserve the abuse. He seems like a nice, if weak, person. 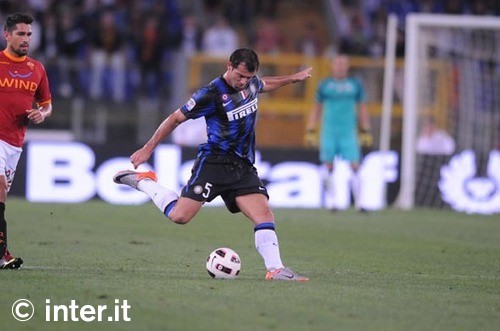 Okay, considering the game, I don’t know that’s its full blown panic time yet. It’s still the first loss of the season. It’s the same game we lost last season if you remember – a lousy game in Sampdoria that we lost 1-0 right before the second Champions League game that we drew away to Rubin, I think. In fact, barring the SuperCoppa result, this season and last season are looking almost the exact same: 3-1-1.

In case anyone was wondering, we won the game after the Champions League game against Udinese, a tough 2-1 game at home.

Before the season started I suggested that this season might be harder than previous seasons. I am not suggesting that the team won’t try to win the Scudetto, the Coppa or the Champions League again, but there will be a loss of motivation. There has to be. These aren’t robots they are people and they got a lot of the respect they craved last May 22.

This game they didn’t look so motivated. Don’t get me wrong, they led in every category including shots, which brings us to this season’s bugbear. We created over 20 chances to score in the game yesterday; we need to put one in the net that can’t be taken away. We know that we can’t rely on the referees to be fair or consistent, that’s been proven these last 20 years or so. We need to put one in. Preferably two.

Look, as woeful as we played, we basically did everything we needed to keep Roma out of the area. Even with the vast majority of all the calls going their way they still needed a ghost free kick and a miracle header to break through in stoppages. Some times, those are the breaks. What’s more interesting is whether the club can correct the problems from happening again. 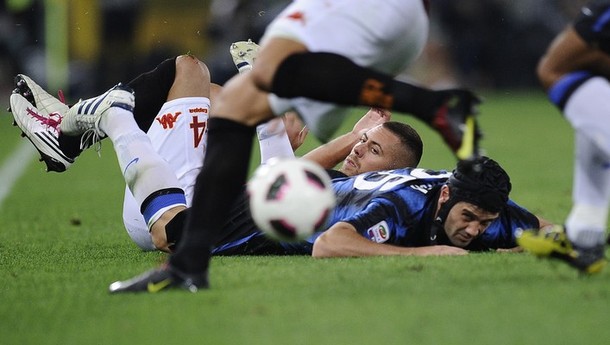 The real issue I have is that this is more or less the first moderately tough time we had this season and the crew didn’t handle it real well. This team should know that a loss is just a loss. No one is going to make all 114 points in a season. Last season was won in the 80s which means that 30 points-ish were dropped by the winning team, us. We ain’t gonna win them all and 1-0 in stoppages away to Roma isn’t a terrible place to drop them, even if it’s a little disappointing in the way it happened. 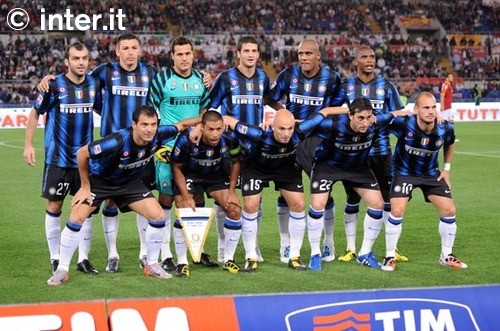