Right off, let me just say that Werder Bremen has not been an easy team for Inter to beat. This will be our fifth time taking them on, and so far, Inter has only won one of those matches. Still, it stands to reason that if we did it once, we can do it again. Perhaps the only "good news" (and I use that term somewhat ironically - injuries are never good) is that they are just as banged up as we are. Now is the time when we find out if the club's decision not to participate in the summer market was the correct one. I think we may go deep into bench territory with this one.

What: Inter v Werder Bremen
Where: San Siro, Milan
When: Wednesday, September 29, 8:45pm local time (11:45am pacific, 2:45pm eastern)
How to Watch: Fox Soccer Espanole is showing this on delay at 2pm pacific, 5pm eastern. To watch it live, try one of these channels, ppv on the UEFA web page, or find a stream: MyP2P, Rojadirecta, Ustream, and ATDHE.net
Liveblog: I will, sadly, be hard at work so cannot run this liveblog. Maybe if we are all extra special nice and bat our eyelashes at him, Kirby will run a live blog at his site... (bat bat bat).

GOOD NEWS! Kirby has agreed to host the liveblog (who knew cyber eyelashes were so powerful). So, party at Kirby's blog, 15 minutes before kickoff. Everyone, say thank you to Kirby (Thank you Kirby!).

So, ya. This is not our first crack at the Werder Bremen nut. We have drawn Werder Bremen twice before in the Champions League. The first time was in the 2004/5 season when we won the home tie (2-0) and drew away (1-1). The second time was just two years ago in the 2008/9 season (or, Mou Year 1). Those didn't go so well as we only drew them at home (1-1) then lost on the road (2-1). As I recall, that loss was a real kick in the pants. We were having our yearly injury crisis and Mou fielded a crazy team. Still, it is scary to look and see how many of the same names will potentially be on the list tomorrow as well. That is to say, Mancini played a full 90 then and he is on the call up list now. If that doesn't turn your hair gray, nothing will.

This year, I am hoping things go a little more in our favor. After all, they no longer have the Divine Umlaut so you never know. We just may have a shot. 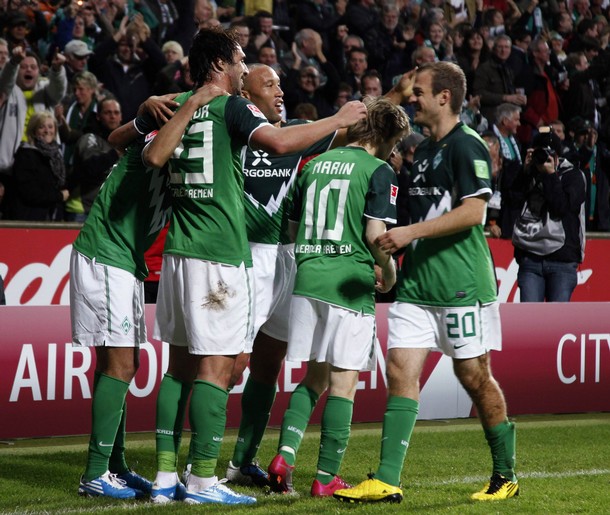 They actually won last weekend. Sigh, I remember what that was like.

Bremen have not had the best start to the season. They sit at 12th place on the table with a pleasingly symmetrical record of 2-2-2. In those 6 games, they have scored 9 goals and conceded 14. More importantly, they have yet to win an away game. So ya, maybe we have a shot.

Thomas Schaaf has called up 20 players

Just like Inter, Werder Bremen will be without a few key players, most notably Clemens Fritz, Torsten Frings, and Claudio Pizarro (dont forget, Pizarro scored on us last time). Even with Frings out, they still have Almeida and Arnautovic on the squad; between them they have 5 league goals. (I still wonder why we didn't pick up Arnautovic while we had the chance. If the problem was Mourinho, well, problem solved. I swear, I will never understand half the things this club does).

Werder had to qualify into the group stages of the Champions League, going through Sampdoria (3-3 on aggregate) to get there. Of course, that aggregate score included an away loss so there you go. More recently, they drew 2-2 against Tottenham Hotspur, thanks to goals from Almeida and Marin (someone better keep an eye on those two!). 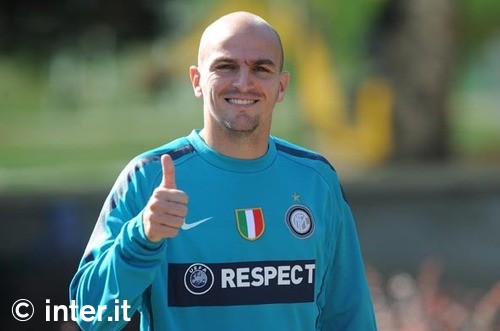 Even with all our injury woes, Rafa has found 20 mostly healthy players to call up:

Rafa is hoping against hope that either Pandev or Milito will be able to play tomorrow, and although Maicon and Lucio are not at their fittest - what other choice do we have?

This is the Inter coverage from today's La Gazzetta along with the headline: Have They Made Peace?

Right now, though, the huge drama is all the, well, drama there has been for the squad members. At least, that is what the press has been picking up on. Between Milito's childish antics, Eto'o "claiming" a penalty, players calling other players egotistical (Eto'o, they wouldn't be talking about you, now, would they?), and Chivu's sideline outburst last week, we have all had our hands full. I blame Mou. The power vacuum at this club is so strong I can hear the sucking sound from here. Rafa has got to stop being so cuddly (I think he sort of looks like a koala bear)

I mean, Inter used to be a team. That means doing whatever it is that is best for the team, not what is best for your own personal ego. Now, I am not naming any names and I really dont want any more arguments, but, come on. These guys need to start pulling together or we will get nowhere this season. I know it is fun to score goals and everyone likes to be the hero, but sometimes you just need to pass the freaking ball already. Enough said, I think. Besides, I am having difficulty building up to a good rant on account of this totally kick-ass hair cut I got today. No one can be angry with super cute hair - nobody. 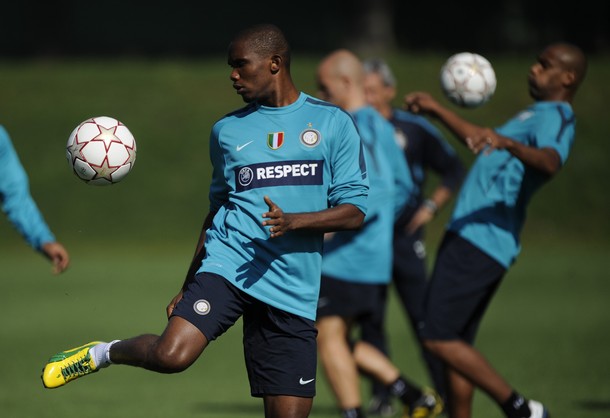 Rafa says you are not a problem but the solution. Maybe you could solve that whole no balls in the net problem tomorrow. How about that>

So far, the press has been pretty nice to Rafa. As I said in one of the comments the other day, La Gazzetta even referred to him as "adorable." Well, I think the glamour is wearing off because they weren't very nice to poor Benny today. I mean, there were a couple soft ball questions like "How does Rafael Benitez speak Italian so well already," but then they jumped right in about Chivu and "a lack of internal discipline." (ouch).

Rafa was quick to point out that if Inter were disciplined against Bari, how can it be that they aren't now. The journos pressed though, and Rafa had is first little press-related snit, his first real Italian Press Moment, saying:

"It is clear that you must always look for something, that all teams much have problems. Whether you win or lose, there is always searching for something. We are Inter, a great team, everyone watches and talks about it, it is normal. I repeat, after the game against Bari, everyone spoke about the discipline of the players and their work, and yet you spoke also of the penalty, because you must always find something. Our squad, in every case, has the right mentality: it is clear, therefore, that if you win everything is easier, while if you lose in the last minute it can make you a little angry."

They then went on to accuse Rafa of not having enough courage when it came to substitutions in the Roma game. He pointed out that he had to take both Milito and Pandev off because of injury. Which led the press to ask if he thought Inter's bench was "too short." Here Rafa finally found his footing, though, by pointing out that "the length of the bench is always the same." See, there's that adorable guy again.

They did actually get around to talking about this game (finally). Rafa admitted that although both Pandev and Milito are on the call-up list, both will need to pass a late fitness test before playing. As for Santon, Rafa was a little more coy saying that he is doing well but there is not a fixed time for his return, "it could be tomorrow, it could be Sunday, or in 15 days."

And then someone brought up Mancini (otherwise known as Flipper) who is included in the squad for the first time. Well, Rafa says he wants to give Flipper a second chance. Ugh. Last time I checked, he was nowhere near faster than lightening or even smarter than those I see. But maybe there will have been some sort of miracle (much like my hair cut), and he will actually make himself useful for a change. Stranger things have happened.

Where does that leave lineups? Who the hell knows. I guess it all depends on who is fit after tomorrow's work-out. La Gazzetta thinks Pandev will be in and Milito out and is calling for the Christmas Tree:

Really, I have no idea. Mostly everyone played pretty poopy on Saturday so I dont know that form will be much of a decider. My guess is they will just choose whoever is healthy enough to at least make a stab at taking the pitch. I would be worried... but you haven't seen my hair. It is AWESOME!

A LITTLE HOUSE KEEPING: WE HAVE A GIPATI!

Actually, we have four: gotTreble?, Kabir (the other one), MAD, and Maryam.

So, as promised, I have a fine certificate (suitable for framing) declaring each one of you a Grand Imperial Poobah of All Things Inter. Just click your name to download a personalized pdf. I will say, though, that the Roma game was sort of an easy one. This CL game will be a bit harder to predict. It seems to me, if you get this one right, you would probably be the Grander Imperial Poobah of All Things Inter. Not to take anything away from last week's winners or anything... I'm just sayin' ... you know... this one is trickier.

Ok, so players aren't really clicking yet like they were at the end of last season. Ok, so Rafa isn't exactly the force of nature that Mou was in the dressing room. Ok, we totally dropped the ball last weekend and let those other guys win. Well... that doesn't mean we cant come out tomorrow with three points. First, we are playing at home and if there is one place Inter knows how to win, it is at the Meazza. Second, every teams needs a wake-up call like we had last Saturday. Good news, now everyone remembers: oh ya, that's right, this is a team sport. I cant help but think the squad will have learned from their mistakes and we will see a marked improvement in everyone's attitude. Cambiasso said that there was a bit of a discussion in the dressing room, but everything has been sorted and they are a stronger group now. And I believe him. If we can find enough uninjured players to actually form a squad, then I think we have a real shot at winning this tie and taking all three points.

And how about a little fun with perspective to end with. Come on, I cant be the only one out there who is childish enough to find this picture a little funny... Am I? 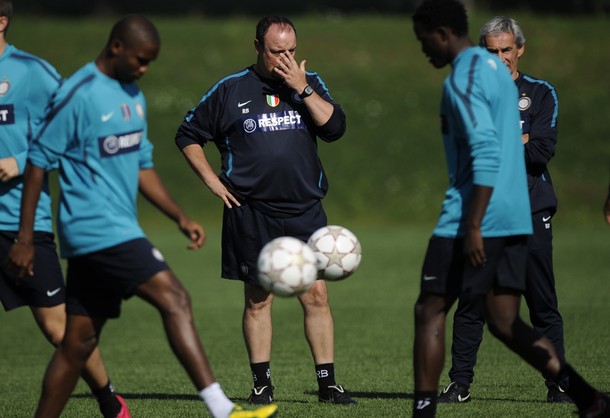