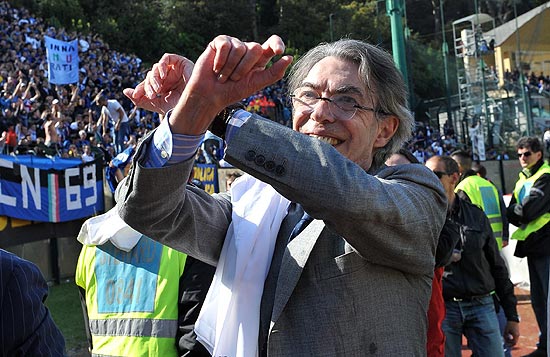 Keep in mind Johonna's post about upcoming games this week that include our nearest and dearest in International games.

I wanted to post this sometime before our first game this season but with all the bruahaha over the market, there were bigger stories. With the International break here, now seems like a better time.

We are on the eve of Moratti’s 13th year anniversary as President of Inter. Considering the relative longevity of his term as president (Only one president has more tenure than Moratti, Fraizzoli had 16 seasons under his belt) and the historical season that is continuing for Inter, I thought that a brief look at Inter’s biggest supporter's time with the club would be in order.

Like the song says, you have to love the insanity that surrounds this club and Massimo Moratti has made it his dream to return this club to the glory of his father’s era in the late 1950s and almost through the 1960s. The era was known as La Grande Inter and Massimo was in his teens for most of it and it made quite an impression on him. Massimo was so enamored that many of those ex-Inter players were part of the club as scouts, directors and advisors for Massimo including the incomparable Giacinto Facchetti.

Massimo had a slow but steep learning curve as he slowly got a handle running the team and he faced several huge stumbling blocks in the road to his goals. I don’t want to go over his entire life in this article, but I thought that brief overview of his time as captain of the FC Inter might be in order considering the incredible amount of change and sensational history that has passed since Moratti took over in 1995.

The late 1980s saw Inter’s win a Scudetto after a relatively long period of good league but not quite good enough results. The early 1990s saw Inter reach 2nd place in Serie A early on and 2 UEFA Cup victories but storm clouds were looming on the horizon.

In 1993-1994 Inter finished 1 single point from relegation with 31 points (wins were 2 points and Inter still made the UEFA Cup as defending Champions). 1994-1995 saw Inter in 6th place barely making the UEFA Cup again. Ernesto Pellegrini “resigned” as president and Moratti took his place in the hope of injecting some optimism and cash in a club that not only saw it’s league position dip but also saw it’s richer cousins on top of the mountain.

It certainly didn’t hurt that Moratti promised to bring his wealth to bear on the team and his personality as a rabid fan/kind, rich uncle helped to repair the damaged relationship with the fans early on. 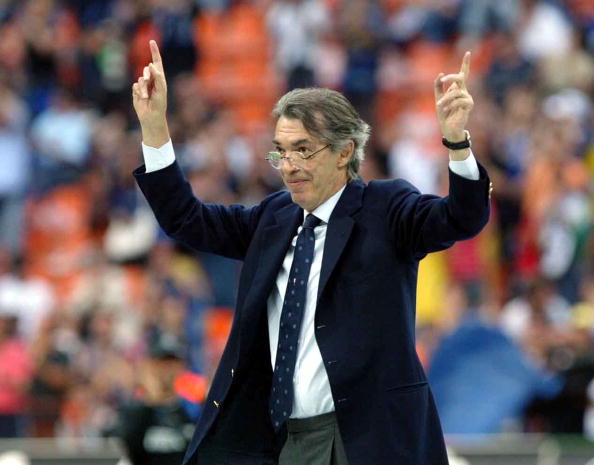 The first thing that Moratti did was to inject an incredible amount of wealth into the club. Within these 6 seasons inter spent a net 335m € on transfers. This amount will account for over 85% of the net spending by the club for the 15 seasons of Moratti’s presidency present season included.

I included the names of key players that were acquired so that we can see where the money went – namely Baggio, Vieri, Seedorf and Ronaldo. Also we can see the sheer number of managers that the club went through. All in all 9 changes were made at Manager. This also would account for the bulk of the managerial changes that were made at the club during Moratti's term. It should be noted that although the club didn’t win a Scudetto in this period, the relative position of the team did improve compared to previous seasons. In fact in the 1997-1998 Inter were the top of the table in April until a match with Juventus – complete with dodgy calls that solidified the belief of widespread Juvetus wrong doing in many players and fans – sent Inter to second place. Marco Tardelli would go down in Inter history for the worst home loss ever 0-6 to Milan with teenager Frey (Yes, THAT Frey) in goal.

Inter would win another UEFA Cup in this period (The winning goal in the final from Javier Zanetti), place runner up for the Super Coppa (ie lose the game) and Coppa Italia (ie ditto) to the same team, Lazio.

At this time in the team’s history I remember everything being very chaotic. Decisions were made to go one way and then very quickly things were scrapped and restarted in a new direction. As an outsider it always seemed to me, and I have no evidence of this, that Moratti had surrounded himself with his boyhood heroes to help him run the team. That is, that he had a group of ex-players making suggestions and he had to wade through the politics a bit. It also didn’t help that Moratti was trained in the business world, and football isn’t really a business at all yet – I would read the excellent but at flawed and anglo-centric book Socernomics for more on this topic – especially at that time. It’s getting a little better now, but back then, especially in Italy, football was where presidents donated huge sums of money and preached glory to their fans. Moratti had jumped into the deep end and needed help navigating the waters. Fortunately, help would come. 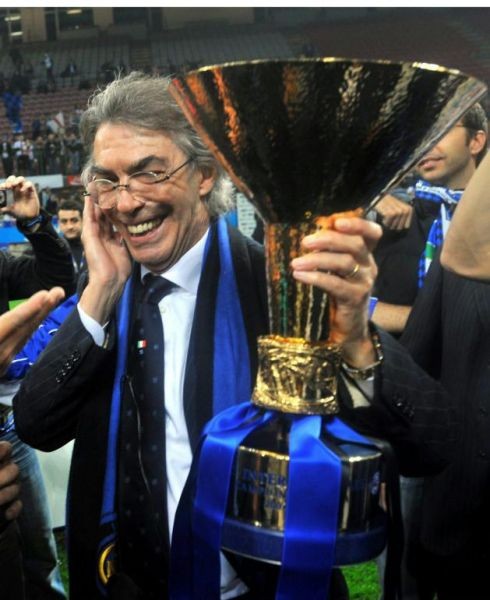 Hector Cuper is the Manager that started to bring all the money players that Moratti was assembling into a semblance of a team. The main indicator that the team was fundamentally better can be seen in the amount of money NOT spent in this time period. The team was considered good enough to compete and as it can be seen above, it did. In Cuper’s hands the team did no worse than third. Unfortunately for Cuper, he was in charge of the May 5, 2002 (2001 – 2002 season) game at Lazio. That day’s games would decide the Scudetto for 3 teams: Inter in the pole position, Roma and Juventus. Inter would lose 4-2 to Lazio under baffling circumstances and finished the season in 3rd place. Cuper would guide Inter to a distant 2nd in the next season and then be fired a few games into the next season.

Fan complaints and protests were at an incredible high with no help from Christian Vieri, who protested his unhappiness on the team by refusing to celebrate goals. To placate the crowds Moratti stepped down as President in 2004 and anointed fan favorite Giacinto Facchetti as the leader of the team. As the new President, Giacinto took over running the team -at least on the face of things - and allowed Moratti the chance to step back and watch a "football guy" do the job that he took over in 1995. Giacinto was probably more hands off than Moratti was, but Facchetti made the running of the team a four person task (Facchetti, Moratti, Oriali and Branca) not a hundred person tug of war.

While all of this is going on, the team that had been at the top of the Serie A heap in the latter stages of the 1990s and the beginning of the 200s was falling apart at the seams. Juventus had in 2002 been on trial for doping its players with PEDs after a comment by then Roma manager Zeman started an investigation into the team. The team itself escaped sentencing by a technicality (a team doctor would take the fall) but the judge handling the case was incensed at this result. Soon after the trial ended, that same judge would hear wire tap evidence during a Mafia case mention Juventus director Luciano Moggi as an associate and would authorize an investigation into the team again. 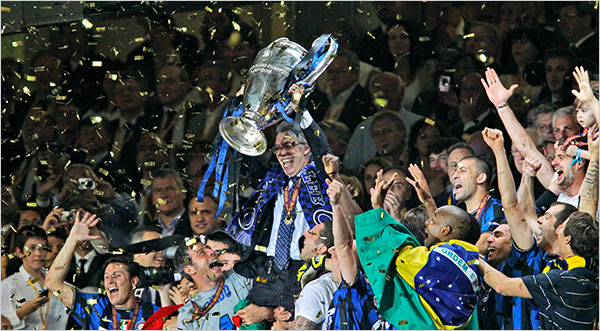 In 2004 things at Inter were definitely on the upswing. Inter would finish 3rd in the League and capture it’s first domestic Cup since the 1989 SuperCoppa. In 2005 they would do all it again – finishing 3rd and winning the Coppa. They would win the SuperCoppe that accompanied those honors.

Then in the spring/summer after the 2005 - 2006 season all hell broke loose. Accusations against Juventus not playing by the rules had been building since the late 90s but between the last stages of the season and the beginning of the World Cup, Newspapers were running with wiretap transcriptions that showed an incredible amount of - not permitted - influence that the Juventus director Luciano Moggi had over every aspect of Italian football – from television producers at TV stations down to referees in a secret phone network.

More importantly, Giacinto Facchetti lay on his death bed as pancreatic cancer had ravaged his 6 foot plus frame. The man that many had come to think of as the Savior of Inter was dead by September of 2006. Around his calm death bed the Inter family held vigil as the hurricane of accusation and embarrassment circulated the sport. The focus of the storm was clearly Juventus but as other team names came up there was a call for someone from Inter to step up and answer questions regarding the team. Early in the proceedings Moratti gave an interview that probably saved the team from any sort of taint from Calciopoli at the time. In the interview he was honest and clear about referee designator contact (there was some, but it was for information on the next crew, complaining about the last crew or friendly conversation) and referee gifts (as in Christmas gifts, usually a ham or something edible to the crew who worked your stadium). In short, he acted like the President of Inter again in public.

As the aftermath of the points deduction hit, he ruthlessly took advantage of his rival's poor luck getting caught/rightfully gained penalties and bought their talented young forward (just what Inter lacked at the time was a young partner for Adriano) who had a falling out with Juventus management in January, Zlatan Ibrahimovic.

Once Inter started winning domestic titles again Moratti turned his attention to the dream of winning the Champions League. Once thought nearly impossible when he started his journey, it now became the obsession. But Mancini, who was managing the upswing of Inter before the scandals hit, was disappointing in the Champions League. Fatally, for his job, he let the frustration of losing in the round of 16 again get to him and he quit his job at the press conference after the loss to Liverpool. He then pulled a George Costanza and walked into work again the next day. Moratti had seen enough and showing some on the job maturity, waited until after the season was over to sack Mancini.

Mancini's downfall was probably a 40-60 percentage respectively of the poor Champion's League showing and the lack of testicular fortitude shown during the "I quit" interview. The chaotic and at times volcanic dressing room probably didn't hurt, either.

Moratti welcomed his new Manager by spending more on transfers (@50m €) than he had since the 2001 – 2002 season. Mourinho, by the time he was done, rewarded the faith shown to him by winning Serie A twice, the Coppa Italia, the SuperCoppa twice and the Champions League.

Rafa, it seems whether he wants to or not, is destined to begin the next (Last?) era in Moratti's stewardship: Financial Rehabilitation. 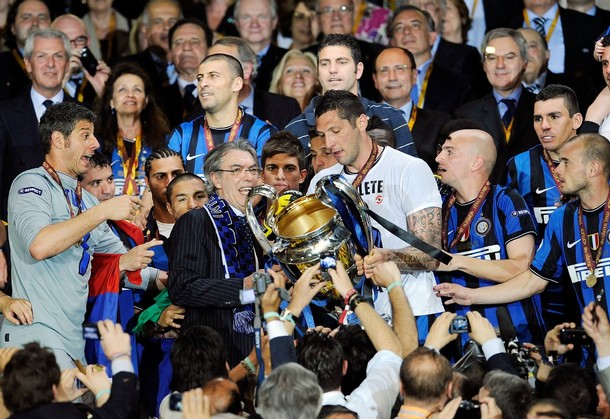