Share All sharing options for: Lucio, Maicon, and Sneijder Honored by FIFA 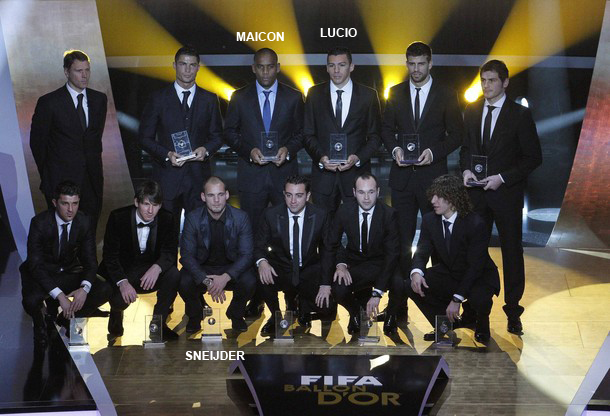 Wesley Sneijder, Lucio, and Maicon were all included in FIFA's FIFPro World XI. In addition, Jose Mourinho won best coach for 2010 for his work with Inter and the amazing triple-winning season. As an Inter fan, I can say that I am proud of all our champions, FIFA winners or not, and to Jose Mourinho, thanks for everything, we will never forget you (oh, and come up and see us sometime... the door is always open).

For those who dont know, the FIFPro World XI award honors the best 11 players of the year and is chosen by over 50,000 professional football players from all over the world, who vote for the best player in each position. To me, that makes this award much more meaningful - it is one thing to be hailed by pundits as the best, quite another to be voted so by your peers.

Jose Mourinho was also honored today as the FIFA World Coach of the Year 2010. 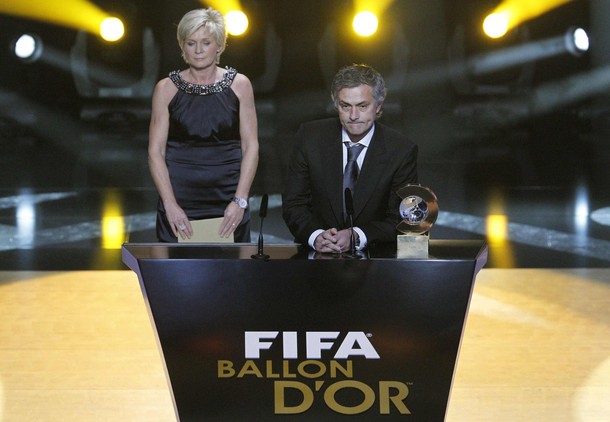 I know, he doesn't work for Inter anymore, but I include him here because he will always be a part of the history of Inter and still lives in the heart of many Inter fans (including me). Besides, the award was for the work he did at Inter so I figure it is relevant. He said today:

"I am the best coach in the world because I was the coach of the best team in the world in 2010.... They should have [introduced me as] the coach of Inter and of Real Madrid because this award is for the coach of Inter. [My tears] were for the hugs from Maicon and the others. All the inter players, the president, all the people at Inter are very happy for me. We were a family and I continue to feel myself a part of that family. I would like on Sunday to go to the San Siro and go under the curva with all the players and show this award, but I cannot. I want Inter to win every game except those against Real. I am an Interista. The Scudetto? If Milan draws a few games and Inter continues to win, they could do it."

So ya, I think it is relevant. (He still loves us. I know it)

Good job, boys. We are all proud of you.

Plus, I still say Jose loves us. Look how he tears up after Sneijder calls him the best coach in the world.