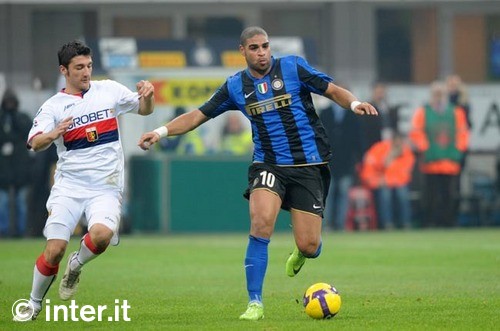 I know that many of you feel this is a throw-away tournament, but I like it. I know it doesn't have much history (88 years give or take) or much prestige in Italy, but I like the Cinderella aspect of it. The very idea that some Serie C team could make it into the round of 16 is just plain fun. Besides, as the current holders, I really think Inter should put in the effort to retain the cup. Oh, and I like the little patch that comes with the trophy. Unfortunately, to get to that patch, Inter has to go through Genoa first. So through Genoa, we will go!

NO LIVEBLOG, KIRBY IS IN CLASS (AND NEEDS TO PAY ATTENTION NO MATTER WHAT HE MAY THINK!)

First off, Inter has never lost a Coppa Italia match against Genoa. Not at home, not away - never. I know, it is only 6 games, but it would be a shame to ruin our record. Last time Inter and Genoa met for a Coppa match was way back in 2009 (if you recall, Maradona came back to the dressing room and played Uncle Bad Touches with the players - nekkid players). It took extra time, but Inter finally took Genoa out 3-1. Normally I would put highlights from that match here but the only ones I could find are super crappy so really, why bother.

This Coppa season will be tricky for Inter. A quick look at the bracket (which I have thoughtfully included above) shows that in order to get through to the semifinals, we will first have to take out Genoa, then probably Napoli. After that, it is a Roma/Juve/Lazio toss-up. Yikes. Interestingly, our bracket has all four of the top six teams on the table. Milan's only has them and Palermo, but then last year they were taken out by Udinese so who can say. At least this time the final wont be Inter v Roma. I think we were all getting a little fed up with that (well, the Roma part at least).

Poor Genoa, they haven't scored a goal this year yet (not since Dec. 5). On the other side, they haven't had many goals scored against them, either. Right now, Genoa has the best defensive record in the league (0.83 goals allowed per game; Milan has 0.89). Not too shabby.

Up front, they have all sorts of options. In the midfield, Marco Rossi and Mesto have been scoring. For strikers, they have our boy Destro, Palacio, (it seems he may not play for Genoa any more), and Rudolf. None of them have very many goals, but the fact that a goal could come from one of many makes them unpredictable. And unpredictable is dangerous. 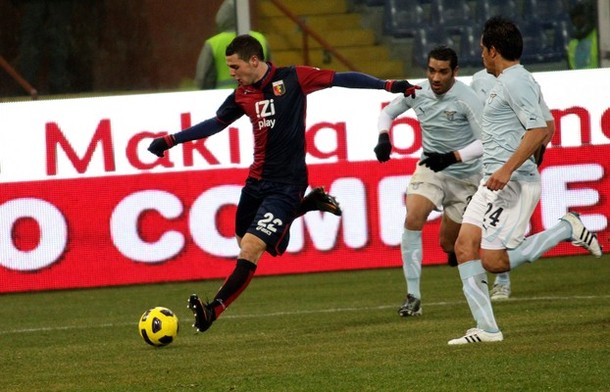 I just hate that poor Destro will have to lose this game (fingers crossed).

Playing Genoa has been a tough fixture for me these last couple years. There has been a lot of buisiness between Inter and Genoa so it seems we are always doomed to meet one of our own across the pitch. This time, the only Inter baby we might confront will be Mattia Destro. I just hate it that they have to lose - I dont want to crush their little souls or anything. Still, when it comes to soul crushing or Inter losing, I choose soul crushing every time (sorry babies, but it builds character; you'll thank us later).

Yowza - Maicon has his angry face on.

I am interested to see just how seriously Leo takes this tournament. I know there is a tradition in Italy that this cup is used to vet the youth players. On the other hand, throw too many babies in the mix and you run the risk of dumping out of the competition. And I wanna win. I am sure the team wants to win as well. So this will be an interesting conundrum for Leo - does he go the full Mou and put the best 11 out there? Or go Italian? Last year at Milan, Leo did a bit of both, starting two youth players and subbing in a third towards the end. Unfortunately, he also lost that game (although, our babies are likely better than theirs so that could help mitigate things).

Leonardo has called up:

And that is not the call-up I was looking for. I am a bit worried that Stankovic and Thiago Motta trained separately and were not called up. With Sneijder out, we need them. Plus, Thiago Motta has played two games - if he is injured again it would be ridiculous (although not out of character). 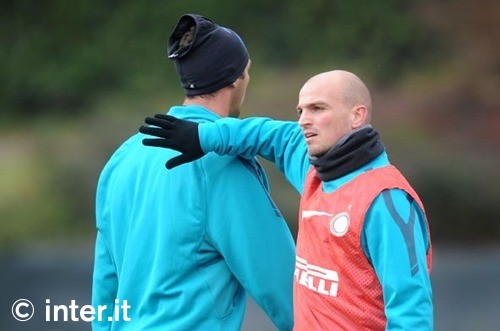 I wish I could think of a clever caption for this photo - something about it just speaks to me.

Five midfielders feels a bit slim to me, and WTF is Nelson Rivas doing on that list?!? That makes my palms sweat. There has been some talk of a bit of a turn over and that Ranocchia will get his first start. (He is one of the cute ones, by the way. Dibs, Maryam!) And I bet Santon as well (given that Chivu was also not called up).

Anyone want to take a stab at a lineup? Because I am stumped. You dont suppose Leo would start the new kid with Materazzi do you??? Oh my... 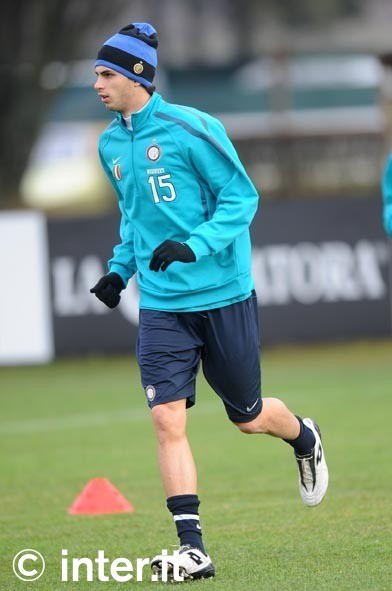 Leo acknowledged that he will have to change things up tomorrow, though was quick to point out that he wasn't rotating because he didn't take the TIM Cup seriously but because players are tired and he wants to scope out some of the less utilized players. He said:

"I think you have to rest players in the league sometimes as well, not just in the cup. We've just played two big games and they took a lot out of us physically, but we have strength in depth and at the moment I've got almost the whole squad available. That's why changing things around isn't only about resting players; you might tinker with the side a bit so you can take a better look at those who haven't played as much. It's important to manage the resources you've got so that that you always put out players who are in good shape, and that includes some of those who were involved in the last two matches and who are on top of their game."

"It's not a case of keeping players happy. All the players are doing their job and showing full commitment in training, not only those who played the last two games. And that's important. They're all fit and want to keep getting better so if I pick them it's not because it's the cup. If I do decide to make changes it's to freshen things up with players that have played less and who are capable of doing a good job."

I know many of you will applaud Leo's sentiment of playing some, erm, depth, shall we say, but it sort of bugs me. Now, I can understand throwing in one or two, but this sure seems like a whole lot (Nelson Rivas for pete's sake).

Ok, Leo, you are all new and shiny so I will give you the benefit of the doubt, but I am a little frightened. Still, happy face, happy face. I mean, it isn't like those are bad guys up there... just a little green around the gills. I guess it could be some sort of crazy magic in throwing all those disparate pieces together - what the hell do I know? Maybe they will shine.

I want that patch.

Please oh please hurry back. I miss you so.... 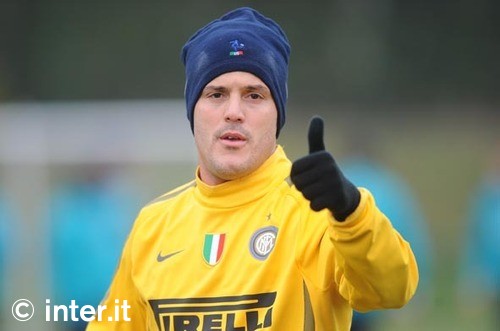