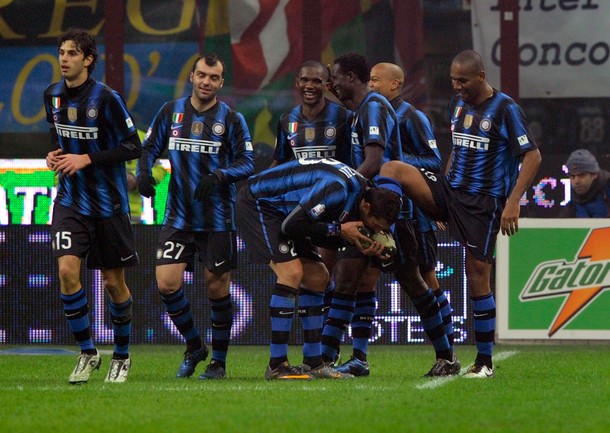 Coppa Italia time and as usual it’s time to give some of the younger players or some of the fringe players some time on the field to keep them in shape and form. It was the Coppa Italia from 2 seasons ago against Roma that introduced us to a just turned 18 year old Santon.

The player of the game is definitely Eto’o. His inclusion in this match says more than a press conference about Leo’s interest in winning this game. It very easily could have been Alibec and Biabiany up front if all we wanted was to put the youngsters through their paces. 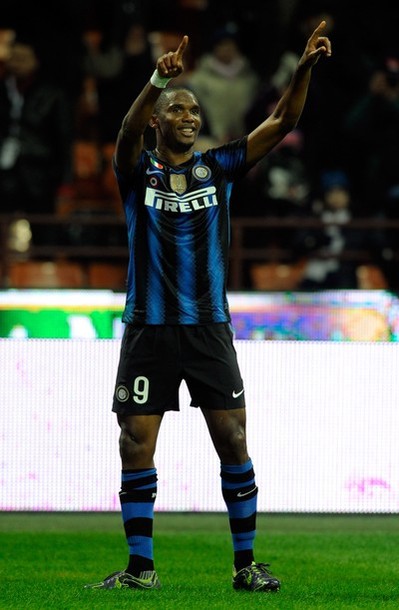 I am not going to do a normal report and analysis for this game. I don’t think it really deserves that much time and secondly the results would be a little skewed because of the competition. Zanetti and Cambiasso for example should and would get good grades even performing at 70% effort as they did yesterday. The point of a Coppa game is to check out the back end of your bench and see if it has any surprises that you can use for the League games... again as happened to Santon and many others over the years. So I really focused yesterday on watching 4 youngish players who haven’t been getting starting time: Santon, Ranocchia, Mariga and Muntari. 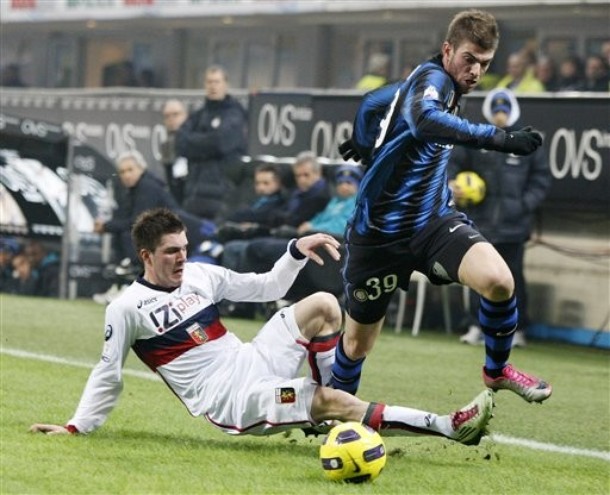 Santon: What an improvement Santon showed from the first half of the year to yesterday. I realize that the competition was less impressive but I am talking about his fundamentals. He was excellent at shadowing and staying with his player when on the ball. He went forward well, making some moves, but this has always been a strength of his. What really stood out to me was his confidence in communication with the midfield in picking up markers. I don’t think that it was any coincidence that Zanetti, who usually plays in front of Maicon on the right, was playing next to him. Zanetti and Santon were able to be a cohesive team and really did a number shutting down the left side, even after Genoa put in their better players. I count one mistake he made, about 58 minutes in where he misjudged a high ball and allowed it to fall without putting a head on it. By the way, he would make good on his mistake and clear the ball before his error put the team in jeopardy.

There has been some jabber on various websites about Santon rotting on the bench at Inter, but I suggest that you ignore it or laugh at it if you read/hear something like that. Santon, a mere 11 days ago, celebrated his 20th birthday and yesterday was his 50th appearance with the senior squad, his 15th this season alone. Mind you, that he lost almost the entire year with 2 knee operations and rehab last season. To say that this player has been ignored or rotting on the bench is crazy and without any sense of perspective (here’s a breakdown: Season 1: 20 appearances. Season 2: 15 appearances). He’ll play more when: A. he isn’t injured as much – Duh! and B. when he has more consistency in his performances.

You know, like everyone else who earns a living playing football.

It’s also worth keeping in mind that this is Leo’s third game in charge and he let Santon play a full 90. Benitez, in 4 months, gave Santon a full 90 3 times: Chievo, Lecce, and Genoa. I included my game reports to show that I (and others check out the fan ratings on Inter.it, yikes) have found that Santon is playing even though his game has been lacking a bit lately. It was a nice relief to see that he still can have a good game as a fullback after Benitez's madness.

Oh yeah, and I saw him smile during the game. It was nice to see that he still could. 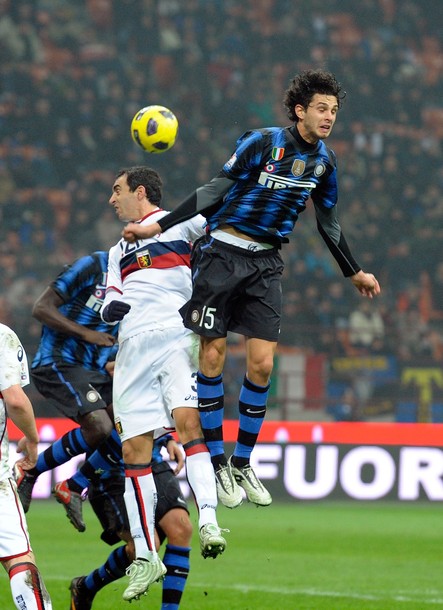 Ranocchia: 20 days after having been sold to Inter the Frog Boy makes his first full start. He made a short (3 minute?) appearance in the last Serie A game against Catania and I couldn’t even begin to guess if he plays on the weekend at home against Bologna. No doubt rumors of his rotting on the bench will commence shortly.

Overall Ranocchia had a good game. His interceptions were spot on and his tackling was very good. He had good communication with Marco – which is to be expected, Marco is famous for running his mouth during a game. The real test will be if he can communicate with Lucio who is just as famous for being a near mute – and the two worked well together, I thought, very complementary, as one might expect. Frog Boy won his share of headers, which is an important consideration for the Inter front office, considering the big bodies they have been putting in the back line lately. Ranocchia was physical with opposing forwards without being out of control. Even on the penalty that he gave up, it was hardly the tackle of a player out for blood or out of control. It was merely a miss of the ball from a poor starting position (behind and to the outside of the forward), which I won’t kill Frogly for. It happens. What I did notice was that even when he was beaten, he didn’t lay out for a panicked slide tackle or grab a body part. He was nearly able to catch up and make the stop. I like the effort and composure, frankly.

As for as his should have/could have been a red card goes, Genoa, as much as I like the team, doesn’t have my sympathy. There have been too many incidents where an opposing player should have had a red card for being the last man and fouling an Inter player and wasn’t thrown out (most glaringly in the first derby last season - Gattuso wrangling Eto'o in the box as the last man). Last season alone it happened something like 3 times so I am not too broken up about it. 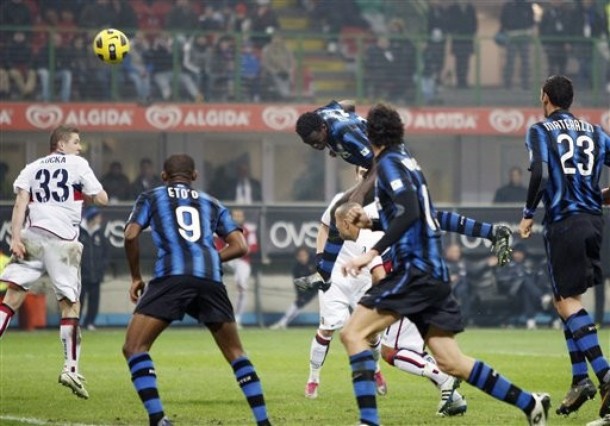 Mariga: Until the 60th minute, I thought that Mariga was the player of the game for us. He ran out of gas, I guess, since he along with everyone else had an injury layoff. Here’s the impressive thing about Mariga, besides the fact that he’s 23, he has an incredibly large range of effectiveness. He’s on the right, he’s on the left, he’s in on the attack, he’s run back to defend… he was everywhere the ball was – a true box to box. He looks like he’s got a little less skill on the ball than most of our other midfielders, his passing is erratic at times, but having said that, he can make space and time for himself to look up and find a target, which is very huge. He won’t burn anyone by dribbling, but my goodness can he tackle.

His header to ice the game showed incredible athleticism and power, yes. But the header also showed intelligence in placing the shot and a desire to want to be the guy that gets the ball in that mess of bodies. I love the potential that he shows, but he’s rapidly coming up on 24 in April and it’s time to show ability, not potential. If he can crack the squad soon, he will be in the catbird seat to take over for a place that might open up in the near future (Muntari sooner, Deki/Cambiasso later?). 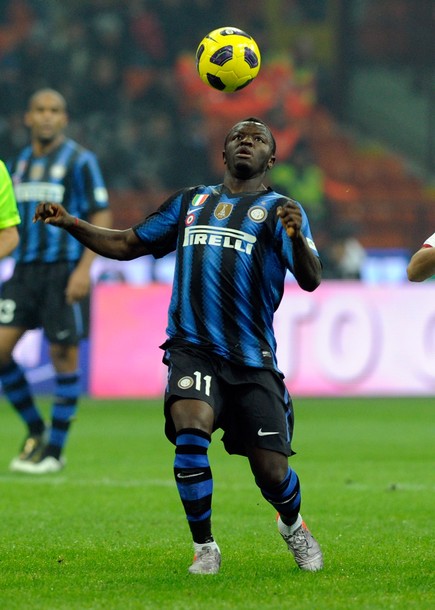 Muntari: This one is going to be tough for me. Muntari is one of the guys that I thought really helped us 2 seasons ago when Mourinho first came to Inter. He played in almost every game and put together something like 4 goals and 4 more assists as a defensive midfielder. Last season when I thought he was going to really come on for us after having a season to settle in, he imploded. And this season he hasn’t made any friends either.

Yesterday Muntari put together a wonderful game. He had an hour to show what he could do and he did a good job. He set up Eto’o for the first goal. He took a coat of paint off the upright on a excellent shot that was about 30 meters out. He defended well and he’s always been a very good passer for a player with such a mean tackle. But is night was wasted when he was subbed off. I am not just talking about walking off slow but the display to his teammates and the reports that he shoved Baresi, when Baresi went to him to explain why he was taken off. I was so sad, because I thought that he had another opportunity to show that he can contribute to the team in a way that no one else really can.

I realize that others see Muntari as not good enough for the team, but I have always held that was not the case. For every superstar forward or attacking midfielder a team has, there has to be 3 or 4 guys behind him that has to work at creating the turnover, plus advance ball to the field position so that superstar can be set up to do something superstarry. Muntari can tackle, pass and move with the ball up and down the field. Don’t believe me? Check out the games at home and away against Juve, 2 seasons ago when he was starting regularly. In fact don’t bother; I will do it for you.

But, with that display yesterday, the end is nigh for Muntari. Like Benitez embarassing the club against Werder Bremen, there are some things you just don’t do. Leo, and by extension the team, were extending something of a chance to Muntari to be a contributor of the team, to wait and advance in due time. I mean, there are players ahead of him in their 30s now who might retire, or get injured. But Muntari won’t wait. And it’s a shame that he’s a good player… but he’s not the great one that he might think that he is. This morning I read that he wants to be loaned out. I think that the team will hang on to him until the summer. We’ll see how this soap opera concludes.

I had wanted to get to a rant about how much I hate Rivas, but I don't have the time for that right now. I'll get to it, though, sooner or later. Hide the children. 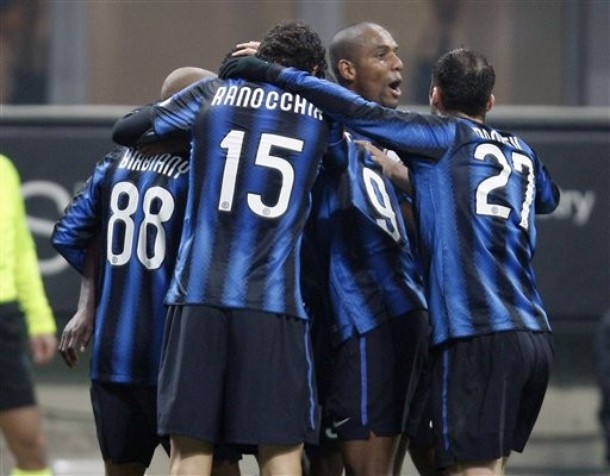