Inter v Bologna: Can We Make It Four?

Share All sharing options for: Inter v Bologna: Can We Make It Four? 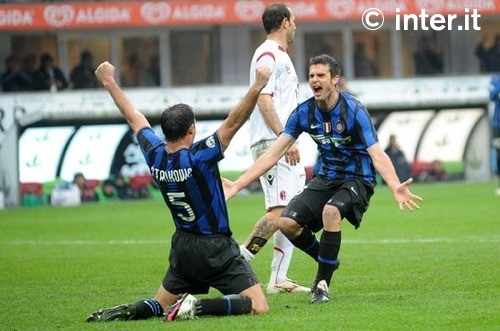 Leonardo has got off to a pretty good start - not spectacular (he really needs to do something about that defense), but certainly promising. Three games, three wins, not bad. Still, the sample size is quite small - the real test will be in the coming weeks when fatigue begins to set in. Will Leo be able to motivate the squad against a bottom-half side? Especially given that despite their position, Bologna will make you pay for inattention. They have some talent and the ability to bring Leo's winning streaklette to a crashing halt. Which is the last thing we need. Besides, if Zanetti plays this weekend, it will be his 519th Serie A game with Inter, equalling Beppe "Lo Zio" Bergomi's record. It would be a shame to lose on such an auspicious occasion.

Inter has an excellent home record against Bologna. Of the 71 times Bologna has come to town, Inter has won 41, drawn 21, and only lost 9. In fact, you have to go way back to 1997 to find a home loss for Inter (and even then, it was only 0-1). But that was before Rafa ruined our Fortress San Siro mentality. If Leo can bring that back, then he will have earned his pay as far as I am concerned.

Anyway, last time Bologna came to town Inter and Roma were locked in a desperate struggle for the scudetto. Inter had four players suspended for the game (including Zanetti, ending a 137 consecutive game streak), and Ranieri was trying to win a battle of words with Mourinho in the press (which is right up there on the what-not-to-do list along with never get involved in a land war in Asia and never go in against a Sicilian when death is on the line). The upshot is, we were are all nervous and second-stringy for this game. But we won. Thanks to a double from Thiago Motta and another from Balotelli, the game ended 3-0 and we continued our march towards Tripletta glory.

A finish like that for this game would suit me just fine.

Bologna have been in a bit of a pickle recently. They had some problem paying taxes (-1 point) and wages (-2) so they really need to make up a little ground tomorrow. Desperate and nothing to lose = dangerous. Even so, they dont have the best away record right now (2 wins, 3 draws, 5 losses) but they won their last game (against Bari) and have had a whole week off. So they are all fresh as daisies to our sweaty gym socks.

Bologna sit at 15 place right now, with very mid table stats: 19 goals for, 24 goals allowed. As always (it seems), Marco Di Vaio is leading the charge for goals. He has 11 which puts him third in line for the Capocannoniere crown (behind Di Natale and Cavani both with 13). After that, we have Miguel Britos with 3, Henry Gimenez with 2, and a smattering of players with 1. Clearly, Di Vaio is dangerous.
As we recall from the away game this season, Inter and Bologna have close ties. Besides co-owning Viviano (keeper), they have two youth products there on loan (Krhin and Siligardi), plus an Inter youth product in Meggiorini (he has a goal and everything this season). Unfortunately, only Viviano and Krhin have been called up and I bet only Viviano sees any pitch time. 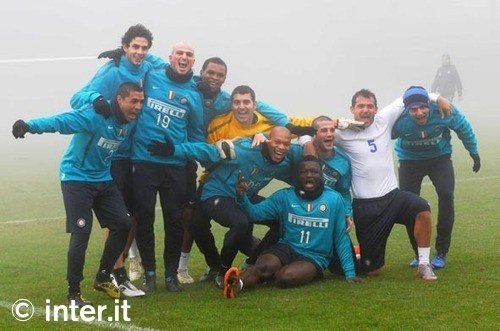 Sneijder, Coutinho, and Julio Cesar still need more healing time, but all three are on the mend. Muntari has been left off to get his head together and figure out whether he will be staying the rest of the season at Inter or not. Everyone else has been dropped for technical reasons. 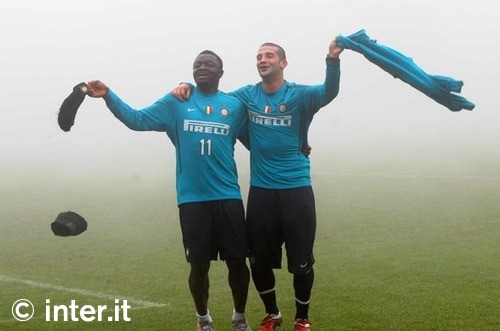 Muntari get your shit together already.

Samuel is back from Argentina and rehabilitating at La Pinetina. Which is good news. I dont know if he will be able to make it back this season, but it is nice to have him back with the team at least. I wish there were pictures but no such luck - for me at least. Anyone?

La Gazzetta thinks Leo will use the same lineup he did against Catania:

And, if they are well motivated, I think that squad should be able to get the job done.

Well, if the pitch doesn't take everyone out first. It is in terrible condition. To the point where even Eto'o is bringing it up. I guess it rained too much in November and there hasn't been enough sun or something. The Milan grounds keeper said that they plan to relay some portions of the turf for the Champions League but aside from that, the rest will just be maintenance.

Hopefully no one will get injured on it. What a disgrace. Here the San Siro is supposed to be one of the grand palaces of football but the pitch is utter crap all winter.

Ok. I know this is short... but time has gotten away from me and if I dont post this now there really wont be any point in posting at all. I know that Leo and the team cant/wont win every game, but we are already at such a disadvantage that I hope we can continue on this winning streak for a few more games at least. Of the top teams, only Inter and Juve played midweek. Also, with the exception of Napoli (who play Fiorentina) and Lazio (who play Samp), all the top teams are playing the very bottom. I have to assume they will take full points. That means we have to as well.

Lets win this one for Pupi... And Lo Zio.