Inter was supposed to play Cesena back in December, but, thanks to the World Club Cup, it got postponed. So I figure it is a bit of a time warp - kinda. Ok, probably not at all but I sort of like how it sounds as a title so just humor me a little. Anyway, Cesena is coming to town for the first of Inter's two make-up games and if we win, we will jump two places up the table from 6th to 4th. Which, as someone pointed out, makes this game pretty huge. Ginormous even. (Sorry about the crappy photoshop pic above. It was all I had time for)

What: Inter v Cesena, Make-up game 1
Where: San Siro, Milan
When: Wednesday, January 19, 8:45pm local time (11:45am pacific, 2:45pm eastern)
How to Watch: Live on Setanta Sports 1, Fox Soccer Plus, and ESPN3.com or find a stream (MyP2P, Rojadirecta, Ustream, and ATDHE.net)
Liveblog: YES! Thanks to MAD, the Liveblog will happen (everyone say "Thank you, MAD")

Cesena and Inter dont really have a lot of history together. In fact, they have only played each other 24 times - total. And we have only lost two of those. Ok, it breaks down like this: 10 of those games were Serie A Inter home games, including 6 wins, 3 draws, and 1 loss. The rest were Coppa Italia and Cesena home games. The last time they came to the San Siro was way back in 1991 when they were handily beaten 2-0, with goals from Matthaus and Bergomi.

I couldn't find highlights or anything, so how about this instead:

Cesena are a scrappy little team with a never-say-die attitude. They may be hovering just above the relegation zone, but they have managed to beat both Milan and Lazio this season, showing they can bring it.

I have to admit, I like this team. I think it began at the beginning of the season when I saw a Serie A preview show on the new teams coming up. They interviewed Emanuele Giaccherini and Matias Schelotto. Giaccherini admitted to being most excited by the prospect of getting to play Inter this season. He is a huge fan and said he wanted Cesena to win at the San Siro but for Inter to win the scudetto (awwwww). Schelotto said that Javier Zanetti was his idol. How can you not like someone who likes Pupi? Anyway, like them. Plus, their seahorse crest is groovy in an op-art sort of way.

Probably Cesena's biggest problem right now is their inability to score goals. They only have 13 which, along with Bari, is the worst scoring record in the league. Which is probably why they are interested in Adrian Mutu. Still, they are not without some scoring talent. After a turbulent summer, our old friend Luis Jimenez found himself in black and white and has scored 3 goals this season. Their other man up front is Erjon Bogdani with 4 goals. 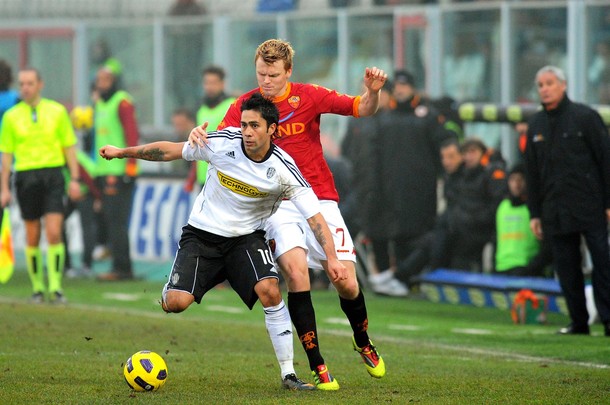 A new lease on life for an old friend.

They are better at the back, having only conceded 22 goals, fewer than Juventus (25) and Roma (24), but a couple more than Napoli (20). Almost half of those goals (9) came in the last 15 minutes of the game so it seems that they start strong, but they have difficulty keeping up concentration for a full 90.

For all their pluckiness, they have a woeful away record. Cesena has only won one game and drawn an additional two on the road. Which is good news for us because we could really use a win on this make-up game. Massimo Ficcadenti, Cesena's coach (anyone ever heard of this guy?), admitted today that he would have rather played this game in December:

"Certainly, it would have been better to have confronted Inter on December 12th, that was another team, missing four or five fundamental players. Now they have recovered almost everyone. It is difficult to find fault in a grout so strong, physically, technically and now also psychologically." 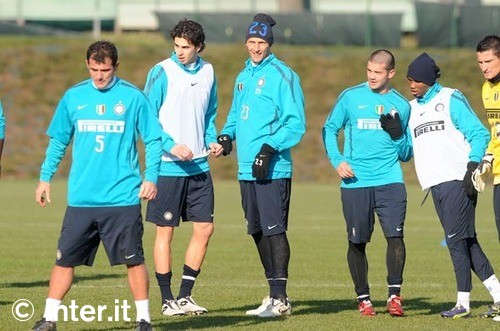 Everyone ready to kick some ass?

Leonardo has called up:

As you can see, Thiago Motta has been left off the list. Not to worry, though, as Leonardo says he isn't injured, saying:

"Motta has been left out of the squad so he can have a rest; it's not a serious problem, just a minor thing that needs to be sorted out. I don't consider it an injury; he just needs to sit out for a bit so he can recover."

As such, Muntari has been convened and is expected to play tomorrow. 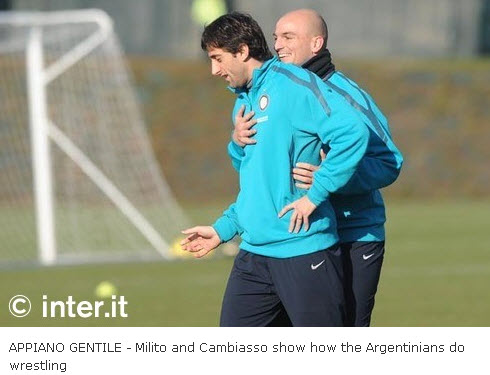 Not quite as good as the happy piggy caption, but I will take it in a pinch.

Earlier in the week, there was some speculation that Stankovic would be benched ahead of the Udinese game as he is only one booking from a match ban. Leonardo doesn't seem to think that it is an issue, though, saying:

"I think it's difficult to try and do things based on the number of cards a player has. I believe the players must be free even when they are close to a ban - they must be free to do their usual things."

As for the rest, how about

And I think that aught to do it.

Alright. I admit it, I want these three points. I want them so badly that I can almost taste them. In case you are wondering, they taste exactly like salted caramels: a dark chocolate shell of joy wrapped around a chewy caramel schadenfreude center and seasoned with salt from the tears of our rivals. Yum. A win tomorrow would see us leapfrog both Juventus and Roma. A loss is almost too disappointing to even consider... so I wont. And with the way this team has been playing and if we can keep our wits about us during set pieces, I think we just might have a chance.

In the words of Eto'o:

"When you play football and you want to win there is no such thing as a less important game. Every team you face is the same. Sometimes you're up against teams that, on paper, are much stronger and who have great players; other times less so. But all of us here at Inter, whether it's AC Milan, Roma or Cesena, we go into the game with the same hunger. And anyone who loves football, anyone who wants to win and who knows what it takes to win respects teams like Cesena. When I'm asked if I find it hard to remain fully focused sometimes playing against teams like Cesena, I say no. I'm in love with football and I know it's easy to stay focused against AC Milan or Roma. It's against these teams, teams like Cesena, that you have to be careful to keep your concentration up. There are no easy games and I hope that on Wednesday we'll be battling and showing our opponents respect. And I hope the three points stay here in Milan."

Oh, and in case you hadn't noticed, our blog page has a new feature. Links to videos of recent Inter goals can now be found on the side panel to the right (----->). Pretty nifty!

How about a little training from today: