Share All sharing options for: Inter 3 - Cesena 2; -6 From Scudetto, -1 From Cash-ions League 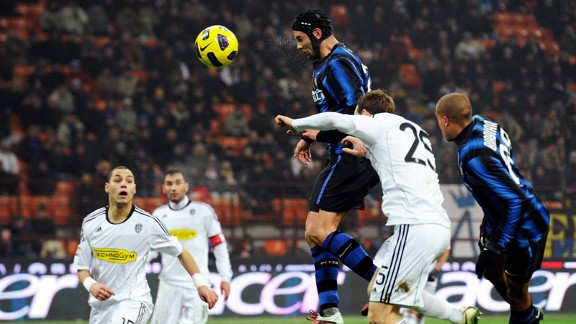 There was a lot not to like in yesterdays game. Inter looked like they let Cesena off the hook several times yesterday. The first Leo sub looked sketchy. Milito pulling up lame again. Pandev playing merely adequately - and that for only 60 minutes or so.

But there was hope. Milito and Eto’o looked deadly together again however briefly. Leo’s sub of Biabiany for Obi was inspired considering how well Obi played when given the chance. Moments of the second half when we were able to control the ball. Players acting like a loss was unacceptable at 2-2.

My Inter Player of the Game - I don’t think that there is no doubt about it: 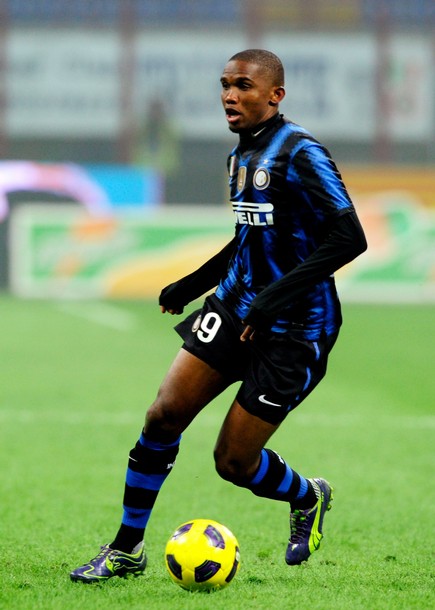 Castellazzi: Here’s what bothered me about Castellazzi’s performance: in 2 first half shots Cesea had scored 2 goals. They were good shots, from close in and both were defensive breakdowns, but he has got to make a save. I am not asking for miracles but he’s got to come up big once a game. Our defense needs help, especially with Marco back there. 6.0

Maicon: Defensively adequate and another big assist. Good to have you back. 7.5

Lucio: You can’t expect a player who takes the chances of Lucio to be flawless, you kind of live with the bad to take advantage of the very good. Yesterday, it wasn’t so great. 6.0

Marco: Marco, for his age, played 75 good minutes. Unfortunately, they weren’t in a row and the game is 90 minutes long. At least one of the goals was his fault. 5.0

Chivu: Scored the game winner and with Maicon took advantage of the poor Cesena flank. It was a good day to be a Chivu supporter. 7.5

Zanetti: Zanetti’s will to win was palpable yesterday. Several times yesterday he tried to take the team on his shoulders. With Maicon he dominated the right flank. 7.5

Stankovic: Terrible game by Deki. He was largely overrun and anonymous. The very few good passes he made didn’t make up for the dozen or so that went wide or to the other team. Plus his shot was... ugh. 5.5

Cambiasso: I didn’t like Cuchu’s game yesterday, although I seem to be in the minority. It was very meh. 6.0

Pandev: A very polarizing figure, Pandev set up Milito’s goal with a wonderful pass but staggeringly choked on a tap in that went over the bar. How the ball went over I am still trying to figure out as it seems that the laws of physics were compromised. He seems to only have a 60 minute battery life. All in all it was a very average game from someone that we need to/expect to step up. 5.5

Eto’o: Time and time again Eto’o did the Cesena defense dirty. They couldn’t stop him. He scored and blasted one off the bar. And he helps set up others. And he helps Chivu out. Simply the most beautiful player in Serie A this season. I know, Di Natale is leading the scoring - but Eto’o plays more games every season and scores in Europe too. Plus helps out in defense. 9.0

Milito: It was a very good first 20 minutes or so for Milito. The goal was a poachers effort and he was well positioned for it. Our attack went down the tubes when he left. He’s definitely out for Udinese but they might have gotten him off the field in time so that he misses a minimal amount of time. 7.5 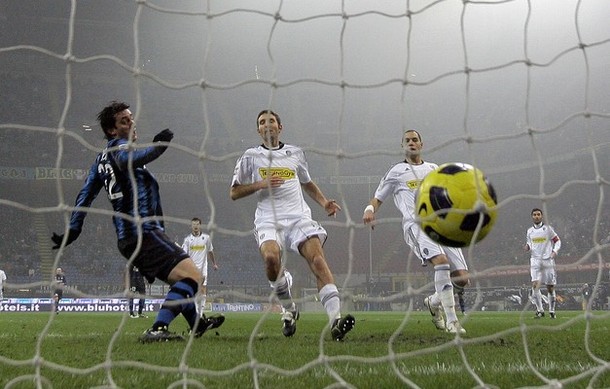 Obi: I want to make mention of Obi’s performance here. he didn’t score but he was a protagonist in the midfield at a time when we were getting overrun because of Cuchu and Deki having average games. He looked very confident and strong on the ball. 7.0

Leo made a number of choices for this game that proved to be the wrong tactic in terms of performance, but the right choices for the end result.

The first choice Leo made was Marco in the back line. Marco, simply cannot play at Inter’s level anymore. At 37, he’s long past his sell by date. *Why Leo didn’t use Ranocchia please refer to the LiveBlog yesterday or Branca’s comments today. Suffice to say it wasn’t Leo’s choice* Performance-wise it was probably a better bet to slide Chivu over and play Zanetti or Santon as the fullback. Results-wise, it might have been too much upheaval for a side that is very delicately balanced as we are right now. We are just regaining our equilibrium. To my mind, too much tinkering might send us down the Benitez Path.

Leo had to make a change early on for Milito and in hindsight he made the wrong choice. Biabiany, for all his speed, can’t hold the ball until help catches up with him. There was no upside to this choice. Biabiany was the wrong player to bring in and it was the wrong position to reinforce. When the tide turned against us, it was the midfield collapsing and leaving a suspect Marco and a poorly performing Lucio hung out to dry. Clearly, in hindsight, the midfield needed something more. 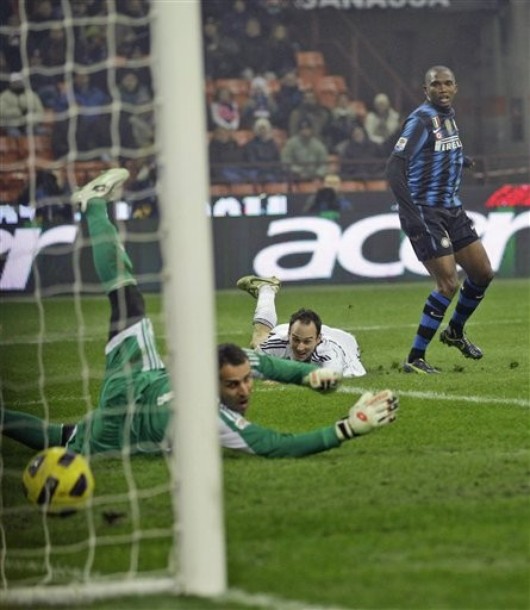 Lastly, Leo and Pandev got a lot of criticism for Goran’s placement in the ‘hole’ behind the forwards. But, like the Marco decision, it was the right decision to win the game, but there was no way anyone was going to look good for this choice. Pandev, pedestrian for 89 minutes, can make a pass for a goal out of nothing. Deki, the only real option as his replacement at the moment, is either hot or cold. Cold, like he was yesterday, in the ‘hole’ and I think we might have held the ball longer or been better at the counter-attack, but I don’t think that Deki makes that pass to Miito. Deki might have tried to, wrongly, hammer it home through defender and keeper.

So, five games played in January and we are 5-0, but the toll is beginning to tell. Milito is newly out - again - and the defense looks a little worn out. Ranocchia will help with that but our lack of a third forward who is a legitimate scoring threat might be the final straw. My problem in all this isn’t that we didn’t buy another striker to replace Mario - I got why then and I get it now, even if I think it’s a mistake now - but why did we loan out Destro? That’s the one that gets me. If we want to save cash, okay. But we still need bodies. Was Biabiany’s CV so much better that it was okay not to play him? And by the way, I am not saying that Destro is The Answer, but he strikes me as a more credible scoring threat than Alibec (perhaps even Biabiany considering hindsight) and it seems to me that there were opportunities for forwards this season on our first team.

Oh well, cat, bag, milk, spilled and all that.

Btw, thanks to everyone for putting up with my newbiesness on the Liveblog yesterday. 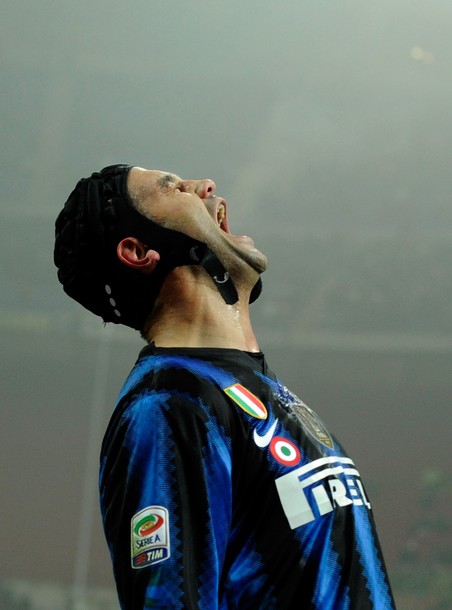