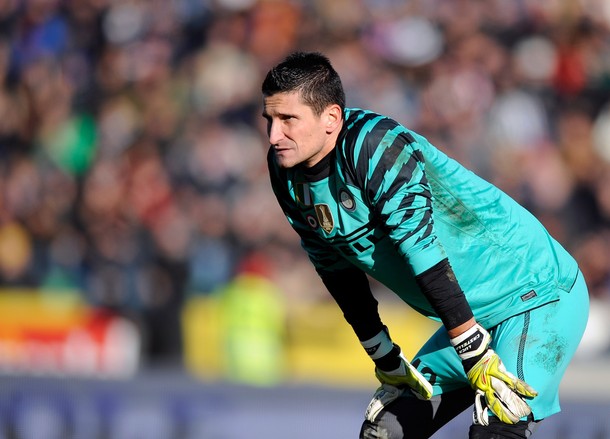 5 Serie A games down in January and our first loss is handed down in the Leonardo Era. By and large, I can’t complain as we accumulated 12 points out of 15 (80%) missing only the last three – although 1 point would have been nice yesterday.

If our goal is to catch Milan in the Championship – which I don’t think it is, or has been since the last nightmare month that Benitez in charge (Nov 6 – Dec 3: Draw to Brescia, Draw to Lecce, Loss to Milan, Loss to Chievo, Win against Parma) – then we gained ground as Milan in the last month went WDDW, or 8 out of 12 points (67%). However, Milan is still 9 points away. No matter that we closed the gap a little from Benitez’s last day, Milan won’t lose too many more. Some of you are saying at this point that we have a game in hand. Until we earn those points, I am not going to count them and even if we get all 3 we are still a bit too far.

If our goal is to gain the Champions League automatic qualification into the group stage, which I think is our goal, then I think that we are well on our way as we are now tied for 5th place with Juve on 35 points. Napoli in 2nd is 5 points away and Roma in 3rd on 38 points is only 3 away. We started this month in 8th place, I think, so our jump up 3 spaces in 3 weeks is really something to be proud of. It also shows how tight things are at the top.

All that said, the second half to the season is going to be pretty rocky. We still have the rest of January to finish off: that is Napoli on Wednesday for the Coppa and Palermo on Sunday for Serie A. Coming up in February we have at least: Bari, Roma, Juventus, Fiorentina, Cagliari and Sampdoria. And that doesn’t include the Champions League game in Feb either, which slots in between Cagliari and Sampdoria.

Highlights are here for the masochistic:

This is supposed to be a non-review, which means that I am not going to talk about the game in particular. Yes we played terribly, slow and as too tired. Yes, the ref - as described in today's online version of La Gazzetta, last nights episode of Controcampo shown on Berlusconi's Mediaset cable stations, other shows and websites - was terrible missing at the most, according to La Gazzetta and the others, a penalty against Cambiasso ( Al 10' della ripresa: Benatia colpisce Cambiasso, rigore netto ignorato dall'arbitro). Like in most things, in failure we learn more about ourselves. We learned a lot about ourselves in this game. 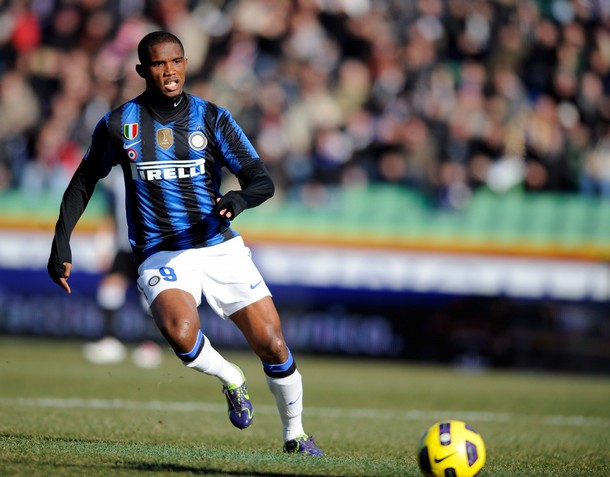 1. At one time we had incredible depth of squad at every position. This isn’t true anymore – and really shouldn’t be true considering the economics of the game nowadays. Last season we had Eto’o, Milito and Mario plus Pandev in the second half of the season. Minus Mario, we are without a goal scorer of real quality. I still stand behind the fact that Mario should have been sold for the good of the squad overall. I don’t think that he would have stood for 3rd choice any longer, anyway. However, I have come to the side that thinks that Biabiany isn’t ready for the first team yet. Nor watching him yesterday do I think it likely that he ever will be. He was that bad. I mean bad. Really bad.

We definitely should have reinforced the forwards. Who, might you ask, should we have gotten? Well, the first name that comes to my mind and the one that the front office has already stated that they regret not signing is Cavani. At least they admit it, you know? He even came out this last summer and said (I am paraphrasing here, kind of), "I want to go to Inter. Come get me." In retrospect, I also think it was wasteful to let Destro go to Genoa. I think it’s also a mistake not to put Alibec out there now. Can he be a worse option than Biabiany? 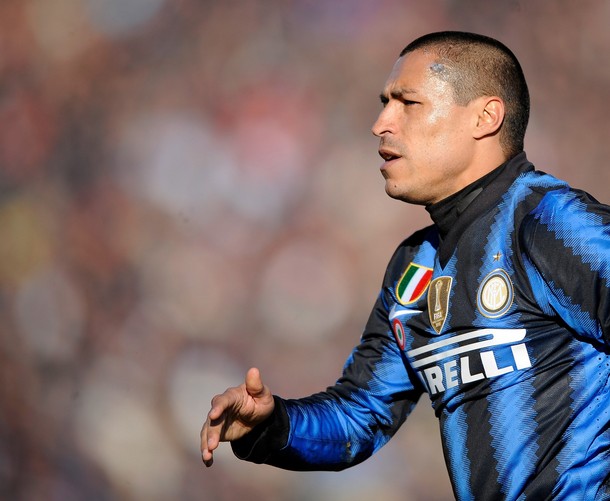 2. We are getting too old. On the field yesterday in the midfield was Zanetti (37), Cambiasso (30), Stankovic (32) and Motta (28). The defense looked like this: Castellazzi (35), Maicon (29), Lucio (32), Cordoba (34) and Chivu (30). I know that we played an extra game this month compared to other teams and I know that the Lunch game sucks, but I declare that we looked tired out there. Its one game out of 5 that we lost, true, but I thought that we looked a little tired against Cesena too (Just as a side note here: I didn't include this in my review of the game Wednesday, because I thought that anyone could pick up on this but I guess I'll have to spell this out. The red card in the Cesena game was a harsh call - as anyone who could read the Liveblog on Wednesday could tell since to a person I think we all thought it harsh - but according to all the moviola analysis, it was correct to the letter of the Laws of the Game if not the spirit).

And the bench is too young. We are in a weird transition right now where the bench isn’t quite at the level that we need it to be. Consider that the backup midfielders of Muntari (who is rumored to be leaving very soon), Mariga, Coutinho, Obi and Nwankwo; Muntari is the oldest by 3 years. He’s 26. By the way, this is a reason I think he should stay… but I think I am going to lose that battle.

Tomorrow, I plan to post about how I think Inter’s youth program and the current front office trends are going to change the way this team looks and runs itself. In less than 5 seasons I think that this team will be unrecognizable to today’s supporters in thought and deed. 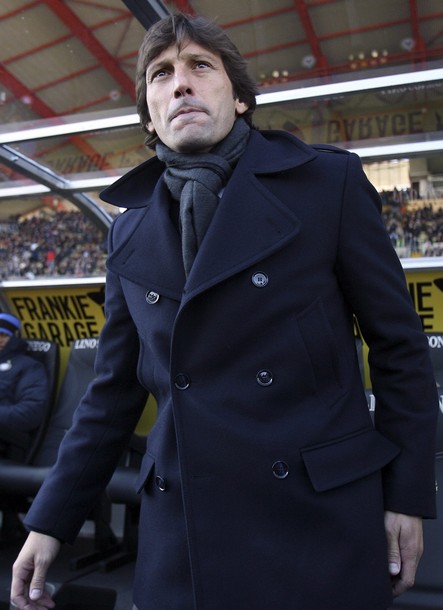 3. Leo’s managerial skills are still in the growing stage. I agreed with his hiring and I think that his style was needed more than Benitez’s was. We didn’t need anyone to tell us how to play or change how we played – we already knew how we played best and we already had players who were experienced enough to know what to do and how to do it. What we needed was someone to manage the people, not the tactics. Leo has already done that better than Benitez did, but his gameday coaching is still a little flat. The first sub was past 70 minutes. The second – and last - was past regular time for an injury. Personally I would have rather seen Chivu as center back and Santon as fullback – only if Santon showed that he deserves it in training. But this is an old gripe. Mourinho, Benitez and Leonardo have all put forth the same-ish lineup in the back. There must be a reason for it.

I am getting tired of saying it, but set pieces are still a problem. We gave up goals from a corner and a free kick. The corner is the more galling as we shouldn't rally give up anything on a corner with the height that we can bring to bear on any given day let alone have it be a problem for us. I don't expect immediate results... but I would like improvement. I can understand being a little riskier up front and therefore giving up some in the back. But Corners? It doesn't sit right.

Barring any major news of any kind, I will be back tomorrow with an update/opinion on Inter's youth system and by extension, the Italian youth system at large. I think that the way things are going in the land of the Black and Blue, this is going to be a very important topic for us. 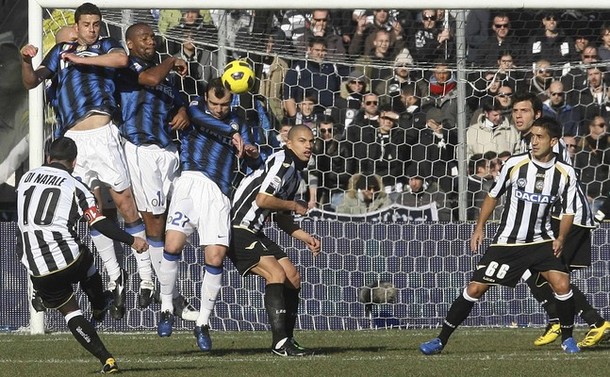 BTW, the ball passes between Pandev and Maicon...