Share All sharing options for: Pazza Inter 3 – Palermo 2; nUtSo, Froggy and Santon Rot on the Bench 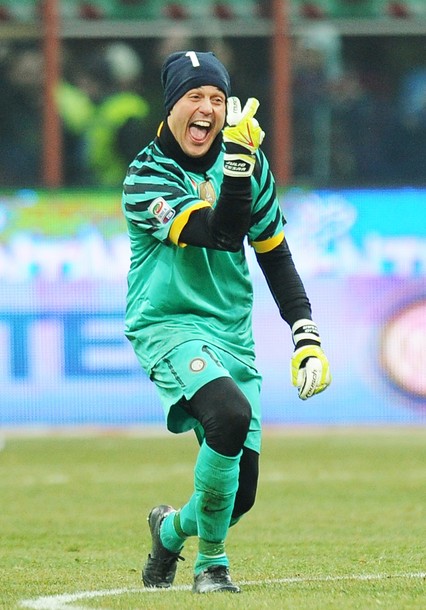 This is a different team than the one that Leonardo took over almost exactly one month ago...

Looking back at the game on Sunday, there was an interesting reaction among the fans and players at losing at halftime. Not just losing, but really down with a small mountain to climb against a good team that was unlikely to stop attacking even while winning.

We don’t perceive this to be the same Inter team that we witnessed in December. That team was depressed, out of gas, fighting valiantly without hope to stop the slide backward.

In the MAD household at halftime, Inter are losing 0-2 and the sole spectator of the game comes downstairs to make his breakfast quickly before the restart so it can be eaten while the 2nd half commences. He’s humming a song from Weird Al that he heard the night before. He’s not angry or despondent. He’s not happy, but he knows it’s not over yet.

In the tunnel at Milan’s Meazza stadium as Inter emerges from the tunnel at halftime, a 37 year old football captain with perfect hair tells his slightly older coach that their team is going to win.

At just turned 1-2, his team still losing and running out of time, the famously emotional Inter Channel game presenter is screaming, “Pazzo! Pazzo! Pazzo! Pazzo! Pazzo gol!” in jubilation, not relief that his team was able to save face, but in belief of a really hopeless redemption of the game.

At 1-2 Thiago Motta lays on the ground, upset at himself for crapping on his own team while they are trying to overcome a deficit. He tries unsuccessfully to merge or sink into the newly relayed field so that he won’t have to look at his teammates in the eye. A hand rests on his shoulder and he hears, “Get up. Don’t worry, I’ll save it.”

Almost at the death of the game an extraordinary turn of events occur as Inter are unbelievably ahead of the game at 3-2. A Palermo player takes a shot to the right at far post that is deflected off a suddenly appearing at the last possible nanosecond Maicon towards his goalkeeper Julio Cesar who was diving to near post – to the left – to be saved and deflected again off his feet. While the Palermo player lies on the ground in disbelief, much like our spectator MAD several thousand miles away, Inter players are looking at each other smiling an nodding as if to say, “It’s happening again… “.

The team that took the field on Sunday is indicative of an Inter that in an 8 game stretch from Jan 6 to Jan 30 Inter won 7 games, including progressing 2 levels in the Coppa Italia. At the end of Serie A business in December, Inter were 13 points off Milan and are now 9, making up 4 points, including winning one of two games in hand. More importantly, Inter are now only 5 point off Napoli who are currently in 2nd. Inter were in 8th place and out of Europe at the end of December with morale low. Inter are now tied for 4th with Roma and spirits are sky high.

Napoli, Lazio and Roma better watch the fuck out.

Cesar: Not a great first half but I don’t blame him for the goals. He was absolutely incredible at shutting the goal mouth right at halftime forcing Pastore to make a terrible shot. Penalty kick double save was astounding. 8.0
Maicon: Made his defensive error for the game, but largely the offense ran through the right – that is, him. He made a number of great crosses, but I think he got another assist this game. He’s on fire. 7.0
Lucio: Lucio needs to step up the game. With the rook back there Lucio needs to be more conscientious. His pushing the ball up and creating pressure led to the second goal. 6.5
Frog: It’s unbelievable to think about how young this guy is and well he’s playing while rotting on the bench. He was consistently the best defender we had out there yesterday. By the way, you all can have Pazzini, I’ll take Frogly. 8.5
Santon: Everyone is going to hate on Santon today and that’s okay. He wasn’t as bad as everyone made him out to be. The first goal was his fault but only because he got himself in perfect position twice and failed to come up with the final tackle. Oh yeah, he also saved all our asses making a last minute save from an open net. 6.5
Zanetti: At 0-2 it was Zanetti rallying the troops and forcing his way forward, leading by example and exuding confidence. Where were you in December, O Captian, My Captain! 7.0
Cambiasso: I will talk about Cuchu, Motta and Leo in depth a bit later. But Cuchu was very active IN ATTACK this game and was open a few times for a sneak attack as noone expects The Spanish Inquisition… or Cuchu apparently. His injury looks like a hamstring so hold on to something tight when the word comes that he misses a month. 6.5
Motta: Thiago was the defensive midfielder today and for the most part it worked. He needs to be teamed with someone back there and when Zanetti became a fullback it was an issue. Other than that, a good job. 6.5
Coutinho: Coutinho lacked the last pass, but did everything well. For an 18 year old trying to impersonate Sneijder, he was better than most. I think he’ll be special, but we need to let him marinate a bit. His taking off at halftime was perfect. 6.0
Milito: Milito looked dangerous and was always around the ball. His effort is always very good and he missed a goal by centimeters. It was agonizing. 6.5
Eto’o: His penalty was spot on but everything else screamed that he needs a break. He won’t get it soon. Playing a bit withdrawn with Pazzo and Milito in front of him isn’t a bad idea. 6.5

Listen to the chaos of Pazza Inter…

A quick word about the refereeing in this game…

First of all, Palermo could have had a penalty at Thiago’s handling offence. It looked like it should have been called, but to be honest, I didn’t catch it until I saw the replay.

Secondly, the first Palermo goal bothers me and here’s why. There was a player in an offside position who didn’t touch the ball but Santon dropped to play him, not knowing the guy was offside. The ball goes wide and that player is the one that sets up the Miccoli score. If Santon doesn’t drop – correctly, I might add, according to his point of view - to pick up that player… he might have been in a position to pressure the pass or something. Is it interference with the play? Santon still had his chances to make the tackle, but I don’t know, it bothers me. 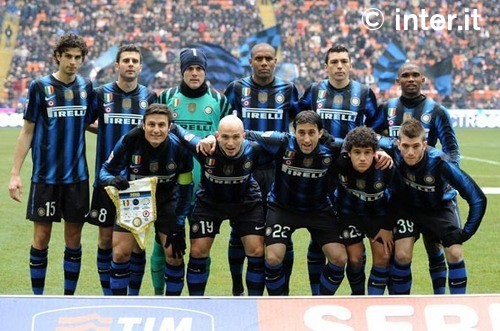 When Leo took over for the team this is what I thought (paraphrased) – He’s going to be a good fit for this team because they are a veteran team and already know what to do. They just need someone to manage the personalities in the locker room – like Mourinho did - and deflect the media craziness. But he’s not going to outthink anyone, especially in Italy where all the coaches, even with the small teams, have to be tactical madmen to have to do so much with so little.

Leo did 2 things this month to prove me partially wrong. First of all, he changed the relationship of our midfielders. It used to be - under Mourinho mind you - that Cuchu, his activity and his awareness, would stay back as the sweeper in front of the defense and Motta as the better technical guy would go forward and provide the better passing.

Leo changed Motta and Cuchu so that Cuchu and his motor would go forward and cause havoc and Motta stayed back and imitated a better tackling Pirlo providing a passing option from deep in the middle or an outlet from the defense. Cuchu’s recent goals and the much better passing overall from the Benitez “era” of the team has proved that this little tweak is another bullet in the gun. Inter can always switch who is going to stay back. Everyone now has a role and knows how things are going work when that happens. It’s called practice and preparation. Two words that I thought we forgot about earlier this season.

Second thing he did really well - especially yesterday – is make the correct substitute out. One might argue that it could still happen earlier, but in every game I think that Leonardo took out the guy who wasn’t performing well. In almost every game he was forced to make an injury sub, but otherwise I can’t argue too much with his subs. Yesterday was a perfect example of this. Santon– he made his mistake, sure but even Lucio made a mistake too – and Coutinho weren’t playing terribly poor but they weren’t decisive or controlling the game. They were reacting, like the way young guys do. On came 2 vets and we started controlling the score the way we were controlling the midfield.

My Inter Player of the Game was the most consistently excellent player on the field. If continues like this it’s going to be sick how good he will be. Kazaan and nerazzurro win! 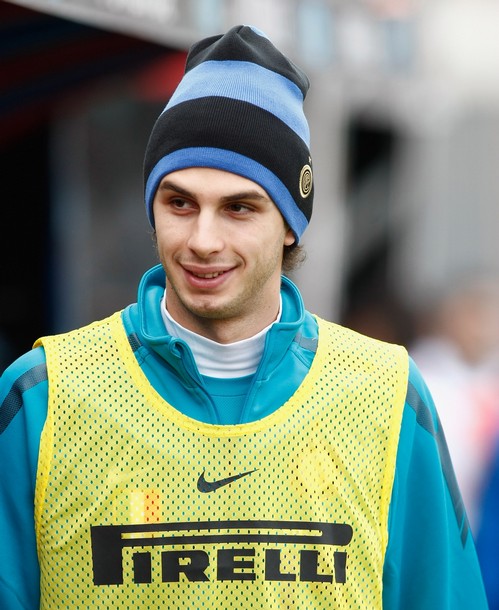