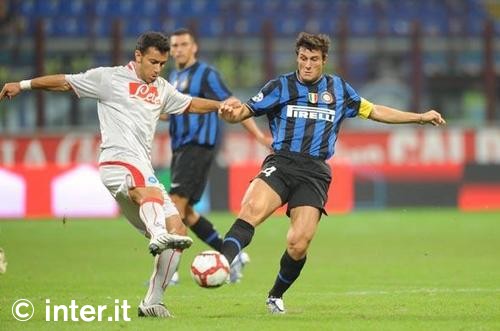 Happy New Year, everyone. I am back from my week away and raring to go. Hopefully Inter feels the same way as there is lots and lots to do: Inter has an incredibly packed schedule. We have eight games this month (8!) and each and every one is a must win if we want to pull something out of this championship. (Well, one of them is a Coppa Italia game, but I think that is important as well - I like that little bulls-eye patch.) First up is Napoli, always a formidable opponent, plus this game has the added pressure of being the first with our new coach, Leonardo. And given that full attention of every sports pundit on the peninsula will be fixed on this game with pens poised, Leonardo better get it right. For all our sakes.

What: Inter v Napoli
Where: San Siro, Milan
When: Thursday, January 6, 8:45pm local time (11:45am pacific, 2:45pm eastern)
How to Watch: Live on Fox Soccer Channel and these other channels, or find a stream: MyP2P, Rojadirecta, Ustream, and ATDHE.net
Liveblog: You know it. Check here 15 minutes before kickoff.

History is most definitely on our side for this game. Of the 67 times Napoli has come to the San Siro for a Serie A game, Inter has won a whopping 46 of them and drawn an additional 14. Records show that Inter hasn't lost this tie since 1994.

Last time Napoli came to town they had a bit of a slow start that saw Inter go ahead by two goals in the first 5 minutes (ouch). By the end of the half, we had made it three and even though Lavezzi got a consolation goal, we had this one in the bag by the half. And it made all the Argies happy (it is probably too cold for a repeat of all that shirtless love, but a girl can hope).

Obligatory (and somewhat depressing given the current state of things) highlights:

For the world according to Napoli, check out Neil's blog over on the Napoli board. Hopefully, he will get a preview up 'cause I dont want my feeble attempt to be all there is.

Alright. So there is no way to sugar coat this. Napoli has been a better team than Inter this season. They have 10 more points and six more goals than we do. They have won four more games than us and sit in second place to our sad seventh. And the man of the moment for them is without a doubt Edison Cavani (boy do I feel stupid for poopooing him this summer). He has scored 10 goals and assisted in an additional three. Add to that Marek Hamsik (7 goals, 2 assists) and Ezequiel Lavezzi (4 goals, 6 assists) and you begin to see the fire power at Mazzarri's disposal. Yikes.

(As an aside, you really have to keep your eyes on them in towards the end of the game. They have some huge rally mojo because half of thier goals have come in the last 15 minutes of the game. You just cannot go to sleep against these guys.)

On the other side, they have a bit of a defensive problem. Sure, they can bang them in (and they really really can), but they have also allowed a goal a game (that means 17 for those who dont want to count). I guess that means if you can manage to corral their offense, you might actually have a chance.

Anyway, Mazzarri has a full squad at his disposal - no injures, no suspensions (wouldn't that be nice for a change). So that means we will see the terrible trio up front (Cavani, Hamsik, and Lavezzi), a whole bunch of midfielders, and three defenders. I guess that means if we can control the midfield, we have a shot at overwhelming their defense. Maybe. 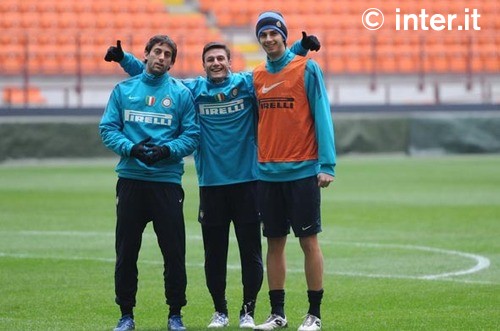 Milito, er, you are not inspiring confidence. You look decidedly angry. Buck up, little buddy.

Well, not much surprise here, Leonardo called up everyone he could:

Julio Cesar, Coutinho and Sneijder are injured and all three will be out for the month (it just never ever ends). Eto'o is serving his last day of ban for his stupid head butt. That means we have to rely on Milito, Pandev, and Biabiany up front. Yikes. What was already going to be difficult just got that much harder (Branca, you better freaking be watching this game!). I suppose that on the up side, all three have scored recently so may be feeling slightly better (confidence = goals). On the down... well... Those three have four Serie A goals between them. 4. Ugh.

As for lineups, who the heck knows. I am fairly certain that Castellazzi will start in goal... But that is just about it. La Gazzetta thinks he will revert to an old friend, the diamond midfield with Stankovic as the pivot. So:

And, given what we have had to deal with this season, this isn't nearly as bad as it could be. Question is, is it enough to take all three points? Oh how I would like to go back to that fortress San Siro mentality.

Ok, I admit, this photo makes me like him a little better. I have a soft spot for dorks (being one myself, that is)

Leonardo decided to shake things up a bit and had his last training session at the San Siro. It is a setting he is quite familiar with and one wonders if he had to stop himself from turning into the Milan dressing room just out of habit. He had his first pre-game presser as the coach of Inter. What a breath of fresh air - he didn't mention Liverpool once.

(I will give you all a moment to snicker)

The journalists did try to draw him out about Berlusconi and they asked him about Milan fans calling him traitor. He pretty much ducked them both without getting sweaty or sounding bitter. Hooray.

Besides that, he didn't really give up much in the way of actually information (Napoli is a good, compact team but we are ready for them; Inter is a great team with a great mentality; blah blah blah). I figure the fact that he can do it all without looking defensive and shifty and spending half an hour talking about his old club is a definite step up. Dont get me wrong, it is still incredibly surreal that Leonardo is the coach of Inter. I still do a double take when I see the training photos. The best way for him to really make a good impression on me is for Inter to win this game. Starting his Nerazzurri career off with draw would not be disastrous, but a loss would sure take what little wind we have in our sails right out of them. I am trying really really really hard to be optimistic here. I think that this squad, on task and full of confidence can do some serious damage. The problem is, I just dont know if Inter has found that winning mental space again - new coach or not.

Ok all you Inter fans, this is a big one. It may seem like just another Serie A game, but it isn't. This is a chance for a whole new start - a winning one this time - and boy do we need it. Everyone think happy, non-injury thoughts. Light a candle, throw some salt, make an offering to the Calcio Gods - whatever. We just really need to win this one. A lot.