Share All sharing options for: Catania v Inter: Time For A Little Redemption 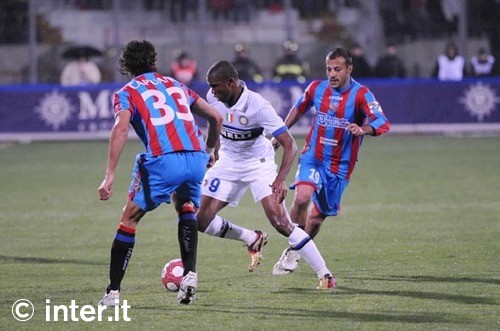 The games will be coming hot and heavy for the next 3 weeks. We will play every three days or so for the foreseeable future. We passed the first hurdle - Napoli at home - now it is time to travel south and take on Catania. I am sure all you Inter fans will remember last year's horror show at the Stadio Massimino (Muntari's famous 2 minute game), well now it is time for a little redemption. Now it is time to go down with our renewed energy and new-found joie de vivre and do it right (I know! French, pretty fancy, right? Only the best for you lot). No red cards and an Inter win. Yep, that would just about do it.

What: Catania v Inter
Where: Stadio Massimino, Catania
When: Sunday, January 9, 3pm local time (6am pacific, 9am eastern - ouch)
How to Watch: Live on Fox Soccer Plus and ESPN3.com, ppv on FoxSoccer.tv, or find a stream: MyP2P, Rojadirecta, Ustream, and ATDHE.net
Liveblog: er, I think so... Kirby? Are you up for it? Check back, I dont want to commit him to getting up early on Sunday.

Playing Catania in Sicily is a bit of a mixed bag for Inter. We have only had 13 Serie A meetings so the sample size is quite low, but Inter has only won half of those games (7) and drawn an additional two. Plus, I think last year's horrific beat down shows that those Elefanti have some stampy stampy feet. As we all recall (I'm sure), last time Inter went to play Catania they trounced us (deservingly so) 3-1. It was just a few days before a crunch Champions League game (against Chelsea - we won), I think this was one of Mou's match bans (for the handcuffs), and the team just played like poop. Of course, Muntari getting red carded off 2 minutes after coming on while conceding a penalty didn't help much either.

Well, see for yourself:

Catania is one of those sad teams without a regular blogger here on the offside which is sad, but, given that Catania is not a very nice place, a little understandable. Dont get me wrong, I generally love Sicily, just not Catania so much. Unfortunately, that means you will all have to make do with me.

Catania currently sit mid table (13th place) in that no-man's land between relegation and Europe. They have 21 points, which is only 5 less than Inter, but we have those two games in hand. They dont. Anyway, they have only won five games this season - all at home. While they haven't yet managed to win on the road, they have only lost one game at home. Most recently they "lost" 4-2 against Roma. I say "lost" because two of Roma's goals were sort of questionable - at least that is what I have read. Whatever the truth of the matter is, Catania feel hard done by and will probably be dying to get a little back.

Catania have an adequate scoring record: 16 goals for and 22 against. Not spectacular but enough to keep them above the bottom of the table. The goals are generally spread around the team (they have nine different goal scorers), though Maxi Lopez and Matias Silvestre are the danger men up front: they have 7 goals between them. According to ESPN, they come on strong in the first half (they have 10 goals in the first 45), but dont necessarily have what it takes to maintain concentration for a full 90.

Marco Giampaolo admits that his side will have to be mentally prepared and concentrated at all times. As for formation, he said:

"My group is healthy and I want to see the same determination on Thursday. For this reason the squad are the same and mostly the same players will take the field as did at the Olimpico. Lopez [is] fine and making goals. At Christmas, he worked hard and did not suffer the way back from Argentina since he remained in the city. He moves well in attack and knows how to dictate the timing of the passage to his companions."

So, the same squad who played against Roma midweek will take Inter on this weekend. That could be an advantage for us as Catania doesn't often play multiple games per week. They may be a little sleepy this time around. A quick look at the stats from the Roma game shows that while Catania didn't have much possession (39%), they still had just as many shots as Roma (17). The big difference was that only two of those were on target (instead of 9 for Roma) - although both of those resulted in goals so at least they make what they have work. Clearly, this squad knows how to attack and if they can improve their accuracy, they could be a real problem.

In the end, while I firmly believe that every team should be approached with respect and the with the knowledge that any team can beat you (they did last year, after all), but this is a team Inter aught to be able to take. At least, in my opinion they should.

Looks like Inter won one more trophy: an Oscar from the Curva. Go Us!

Leonardo has called up 21 players:

The injured are still broken (Samuel, Coutinho, Sneijder, and JC) but at least Eto'o is back from suspension. Speculation is that Leo will continue with the diamond midfield, just replacing Pandev with Eto'o. Now, I dont know if this is Inter's best formation, but it is certainly one the players know how to execute. Which is good. At least that way, everyone knows what they should be doing (winning, duh). That would mean tomorrow could look a little like this:

Maybe with a little late game Mariga/Biabiany/Pandev action. I think this could do it. Stankovic has been playing well and Thiago Motta has been showing us why we put up with all those injuries. If we play with the same enthusiasm and determination that we did against Napoli, then I think we can win this thing. Plus, going down to Catania means a 20 degree boost in the weather. I think it is hovering around 45 degrees (F) in Milan right now while Catania is a balmy 65 or so. That will make everyone happy.

Oh, and a bit of good news: training videos from yesterday (Friday) show both Sneijder and Countinho are back to running. I think they are both on the mend! BTW, Inter has been posting videos of training regularly now that Leo was appointed (here is today's). I love this! Yay!

While "oozing determination and enthusiasm," Leo was a little more forthcoming about himself and his coaching style in this presser. Good news for me, he likes hugging:

He also laid out his plan for dealing with Inter's heavy fixture schedule, saying:

"The best way for a team to train is by playing, game after game. Just playing is the best way to prepare for more games. For me, football is about enjoying yourself; it's not a burden. There mustn't be any 'burdens' in football. You win some, you lose some, you look to improve, to develop, to change. But I don't feel any burden; I just enjoy the emotions," was the coach's reply when asked if he had taken a burden off his shoulders with the win against Napoli. He went on: "Now let's concentrate on the next step: the match we have tomorrow. It's a game that we have to win, and the opposition will be tough. Yes, Catania will be a tough game."

He also said that Chivu was ok and ready to play and he expects Eto'o to be his usual self. Stunning, presumably.

Well, I have to agree, he does sound confident. And he still has nice hair. Both are endearing. Right now, everything is relatively easy for him - the players are excited and confident. I dont know how he will react should the team lose motivation. Hopefully, that wont be an issue for the rest of the season. He seems like he understands that Inter has an uphill road (a long, long uphill road) ahead of them but that if you break it down to one game at a time, it becomes manageable: just win this next game and let the math work itself out in the end. Or, as the Significant Other is fond of saying: you eat an elephant one bite at a time. (why he wants to eat an elephant is beyond me) Well, Catania is our next bite. All we have to do now is chew and swallow (ok, this analogy is starting to gross me out).

Lets just win this one so we can start thinking about Genoa and the Coppa Italia.

Just to remind us how good it is to have Eto'o back: