Inter v Napoli: Where the Rubber Hits the Road

Share All sharing options for: Inter v Napoli: Where the Rubber Hits the Road 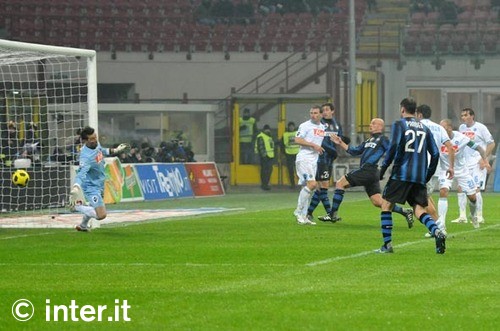 A win against Bologna, good. A win against CSKA Moscow, great. A win against red-hot Napoli? Outstanding. Last season, this fixture marked the begining of a new Inter under coach Leonardo. It was the beginning of a winning streak that saw the club move from mid-table obscurity to within grabbing distance of the scudetto. Last year's Napoli was great. This year, they have the chops to be epic. This game is where Ranieri's rubber hits the road. I firmly believe that Napoli will be the team to beat this season and Inter is just the team to do it.

What: Inter v Big Bad Napoli
Where: Home turf
When: Saturday, October 1, 8:45pm local time (11:45am pacific, 2:45pm eastern)
How to Watch: RAI International, Fox Soccer Channel, and these other channels. Or, you can find a stream (Rojadirecta, Ustream, and ATDHE.net).
Liveblog: You know it, baby! Be here 15 minutes before kickoff and join the fun.

I just love this new poster campaign. Wish I was in Milan to see it in person.

Inter and Napoli have met many, many times (144), most of them in the Serie A (136), and generally speaking, Inter owns the San Siro. That is, almost every time Napoli comes to Milan, they leave empty handed. For those of you prefer specifics: 68 home games; 47 wins, 14 draws, and 7 losses. Even better, we have 149 goals and they only have 65. Yipee. As I said above, last season this was a watershed game for Inter. It was the beginning of a comeback we could all be proud of. We won 3-1, with two great goals from Thiago Motta (remember him?) and cherry on the cake from Cambiasso. After the malaise of the Benitez months it was downright inspirational. Exactly the sort of inspiration we need this weekend.

First of all, just let me say that Napoli's web page is awsome. It is like this crazy flickering kalidiscope of advertising and news streamers. There is always something whizzing around. What's better, they make Lavezzi and company (along with someone's girlfriend? wife? groupy?) advertise the merchandise. I wonder if they had to go to modeling class and everything.

The Boys in Blue go Blue Steele - crazy. And who is that skanky chick anyway?

Napoli has had a great start to the season, certainly better than ours. They have two wins against Cesena and Milan, a draw against Fiorentina, and, strangely, a loss against Chievo (those donkeys are tricky!). They have also fared quite well in the Champions league with a draw against Manchester City and a resounding win against Villarreal. Napoli this season seem to be the real deal.

When it comes to goal scoring, though, it is all about Edison Cavani (what is it about Uruguay and cheekbones anyway? First Forlan and now Cavani). He has scored five out of their nine goals in all competitions so far. Unfortunately, he has an injury and was not called up. 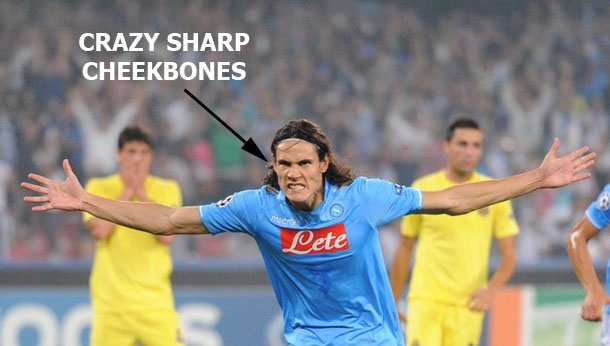 And you just know that Pandev is going to be out for Inter blood - ex's always are. Plus, Hamsik and Lavezzi are no slouches. Even without Cavani, there is plenty of talent for them to draw from.

And that is a squad that has the ability to put a world of hurt on many a team.

CR has called up 21 players:

I think Pazzini is a maybe and I dont think Maicon will start. Milito also picked up a bit of a knock today so his fitness is speculative as well. Basically, we are a squad of walking wounded: Chivu, Stankovi, and Obi have also been undergoing treatment lately. As for Pazzini, Ranieri said:

"Pazzini trained separately, he's in the squad and I hope to have him available. There are 24 hours to go; we'll see. I hope he does make it because his absence would be a great loss for us."

So, what that means in terms of lineups, I just dont know. La Gazzetta has an idea but it doesn't seem right to me. They include Maicon and Pazzini... I just dont know... I guess that means it is time to dust off the old GIPATI cause this one is a real head-scratcher. So, post your guesses for the starting lineup and, if you are correct, you will win a certificate (suitable for framing) declaring you as the Grand Imperial Poobah of All Things Inter. It is a prestigious title that many aspire to but few achieve.

Oh, and in case no one noticed, this will be the new guy's first game in front of the fans. As such, Ranieri has pointed out:

"If I wasn't pleased and excited about tomorrow I wouldn't be a coach... [smiling]. I do this job because of the emotions it gives you. I want the team to play with character in every game and the fans to get behind us, because we want to give them lots to cheer about."

I know we are playing better under Ranieri than we ever did under Gasp, but there is just something about Claudio that smacks of insincerity. Like his mouth is saying yes but his eyes say no. I just dont know what to make of him. It is very disconcerting.

And speaking of disconcerting, what about crazy "Walk on by me" Lucio up against Lavezzi and Hamisik? I like the goal scoring and all, but the fact that he just let that blue-haired Love character walk right by him makes me nervous as hell now that we are up against zippy youthful players who can run like the wind. See. Now you are picturing it and you are frightened as well. I hope that Lucio is also frightened and will actually MARK HIS MAN this time. Please.

I really want to win this game. I think that if we can pull this off, it will go a long way towards making this team really feel like they have a shot. A legitimate shot. So let's go get them!