Share All sharing options for: Catania v Inter: Time for a Fresh Start! 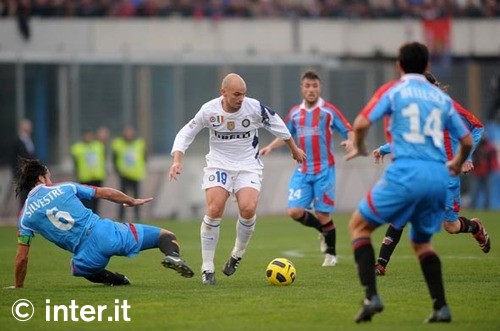 Let's not mince words: Inter has had a bad start to this season. What with injuries, new coaches, and generally bad performances, it has already been a looooong season. Luckily, much of the team has had a couple weeks off and there has been time to heal up a bit and catch our collective breaths. Now would be the perfect time to start fresh and really get going this season.

What: Catania v Inter, a brand new day
Where: Stadio Angelo Massimino, Catania (the only ugly city in Italy)
When: Saturday, Oct 15, 6pm local time (9am pacific, noon eastern)
How to Watch: Live on RAI International, Fox Soccer Plus, ESPN3 or these channels. Also, ppv on FoxSoccer.tv or find a stream: Rojadirecta, Ustream, and ATDHE.net
Liveblog: You betcha! Be here 15 minutes before kickoff.

Our history with Catania is pretty mixed: out of 14 away Serie A games, Inter has only won 8 times. They have lost 4 and drawn an additional 2 games. In the last few years, results have swung between a 2-5 win for Inter (in 2007) to a 3-1 loss in 2010. We won this tie last year thanks to a second half double from Cambiasso. I wish I could remember more about this game but it is a bit of a blank. Still and all, a win is always a good thing. Maybe the some highlights would jog our memory:

While not having a wonderful start to the season, Catania has done better than Inter (really, most clubs have). They sit mid-table with six points (two more than us). The have drawn their last two games (against Novara away and Juve at home). Anyway, they have a very credible team full of young, fast players. Just the sort of thing that usually trips Inter up. Hooray!

Boy, this just begs for some dialog. Wish I could think of something. Anyone?

Basically, everyone else is injured. We almost had Poli back but nope, he is injured again. As is Chivu and Sneijder and Forlan and Julio Cesar and Coutinho and every little bit of creativity Inter has managed to scrape together. Well, Thiago Motta is back but is clearly not ready for 90 minutes (is he ever?).

"The lads who had minor injury problems were able to train better and the long-term injured managed to make up some time. And so, for instance, Motta was able to return to fitness even though he wouldn't manage 90 minutes. Sneijder is improving, he's almost training completely with the squad and I think he'll be ready for Lille. I'm considering Chivu for Lille as well, as long as he's 100%, since trying to take things easy with the injured ankle he may have overburdened the other. Then we have Julio Cesar; I hope he'll be ok for the Champions League match: he was still feeling slightly unsure of himself, so I'd rather not risk taking him to Catania. I'm not keen on trying to cut down on recovery times after injury. I prefer players to sit out one more match rather than find themselves with a long-term problem."

Oh, and in case you were wondering, Ranieri will indeed be on the bench tomorrow. His red card against Napoli was reduced to a warning and a fine (will wonders never cease?). Anyway, there is no ban (and, according to Ranieri, no insult to the ref). Obi and Ranocchia are still suspended though.

That leaves us with (according to GdS):

with Cordoba, Jonathan, TM, Alvarez, Castaignos, and Zarate on the bench.

And I guess that will have to do it. I mean, Maicon was looking pretty good against Napoli - two more weeks of training can only help, right? Zanetti should be in a particularly good mood after as he was just golden footed and Castellazzi often surprises me with just how good he really is. If Naga can keep his mind in the game and Muntari can stay on the pitch (remember, he doesn't have a good history with Catania), we just might have a shot. 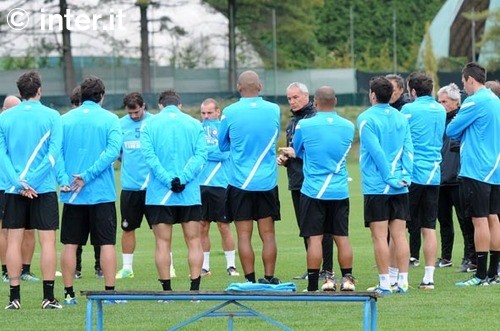 It's all up to them now.

Boy, it sure would be nice to win this one. I know, Catania is a tough place to go and get a result, but damn it, we need one and we need one right now. I mean, I am an Inter fan so used to suffering but this is getting ridiculous. If we can pull ourselves into the top five by winter break, we may have a chance (a very very slim one) of finishing in a CL slot. The only way we get there is to start winning us some games and Catania is as good a place as any to start.