Inter v Chievo: Once More Into the Breach

Share All sharing options for: Inter v Chievo: Once More Into the Breach

You have all probably noticed that I haven't been around all that much so far this season. Besides the usual work and family obligations, more than anything, I have been desperately trying not to Fever Pitch myself. For those of you who are not familiar with my usage, Fever Pitch is an excellent memoir by Nick Hornby recounting his love for Arsenal and the impact of that love on his life. For me, the salient essay was the one in which it became clear to him that his whole life was being affected by Arsenal's poor performances. He had completely mismanaged his career, his love life, and even his friendships were suffering from what amounted to football inspired depression. Now, I am not anywhere near that level of doom and gloom (yet), but I was beginning to find my moods and daily outlook (perhaps) overly influenced by the weekend's sports results. Which is stupid. So I decided to back off a little and get some perspective. Well, that, and no matter how much I try to accept Claudio Ranieri into my heart, I find his past dickiness still rankles. I just dont trust him yet. I am hoping that this, too, will pass. Soon. Please.

But enough of my excuses - next thing you know I will start writing about my relationship with my mother (shudder). Let's get on with the preview and the topic at hand: Inter and how they will please stop sucking now.

What: Inter v Chievo (the giant killing flying donkeys)
Where: San Siro, Milan
When: Sunday, October 23, 3pm local time (6am pacific, 9am eastern - ouch)
How to Watch: Unless you have ESPN3 (in the US) or one of these channels (internationally), you will need to find a stream: Rojadirecta, Ustream, and ATDHE.net
Liveblog: Kirby is a trooper. Be here 15 minutes before kickoff to participate.

Looking back, Inter has only lost this tie once. Recently, this game has been a goal fest: three out of our last four games, Inter has scored four goals. Last year was an anomaly as we only got two (Maicon and Cambiasso):

Like most teams this season, Chievo is above us in the table, with nine points to our sad, sad four. Their last two games have been draws (with Juve at home and Cesena away), but before that they managed to beat Genoa 2-1. They have scored five goals this season while giving up 6 goals. Not great but not bad - certianly better than Inter. Anyway, the two big scorers for Chievo are Davide Moscardelli (2 goals) and the always dangerous Sergio Pellissier (2 goals). Other dangerous players include Alberto Paloschi and Cyril Thereau, with one goal a piece. If you recall, both Moscardelli and Thereau scored against us in that 3-2 loss this summer (the friendly we played on strike day).

But that was Gasp's Inter. Hopefully Ranieri 's Inter is a bit less leaky. 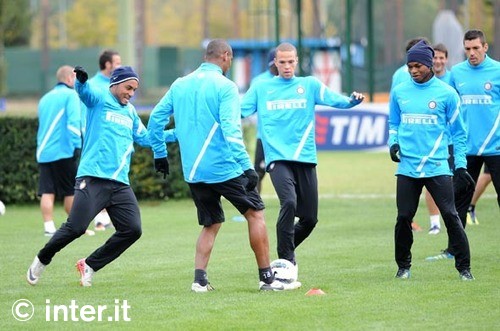 Ranieri has found 21 healthy-ish players to call up:

Ranocchia thought he would be ready to return when his ban was up but it seems that he is still injured. As are Poli, Coutinho, Forlan and Samuel. Good thing Inter has been linked to this Brazilian Juan Jesus kid because we could use a defender or two (he was really very good in the U21 World Cup this summer). Anyway, we could really use some younger legs back there.

Ranieri was coy today when the subject of rotation came up in his presser. He did say that he didn't plan to change much and he didn't want to rest in form players. Claudio also shares my disappointment with our defense so far this season saying:

"We've lost 10 points in the second half of games. We have to try and hold onto the many good things this team creates. Once we have a result, we must defend it as a family defends a treasure, as you defend something that's very important to you."

And for the most part, I agree. But then, I also think Sneijder has a point when he says that Inter needs to not just sit back and defend a 1-0 lead but to push for that second goal as well. Somehow we have to figure out how to do both: how to defend a lead while still playing offensively. How hard can it be (says the person who has never played football in her life).

Ok. So, with all of these injuries and Ranieri saying no rotation, La Gazzetta is predicting a little something like this:

Which is just like we saw against Lille but with Deki in place of Thiago Motta. And I have to say, that looks like it may be the best of what we have available right now.

Alright. So there is no sugar coating this season so far. We have been through two coaches and have yet to win a league match at home. We are nine points off the pace and things are looking pretty grim. But that is the beauty of football: it could all turn around tomorrow. A good win (hell, any win) at home could be just what we need to start feeling like Inter again and get this show on the road. For real. Like we mean to win something. At least, that is my story and I am sticking to it.

Come on guys, I know you can pull yourselves out of this slump and finally win a game. Please?

How about ending with the Babies showin' us all how to get things done!