Atalanta v Inter: An All Black and Blue Occasion.

Share All sharing options for: Atalanta v Inter: An All Black and Blue Occasion. 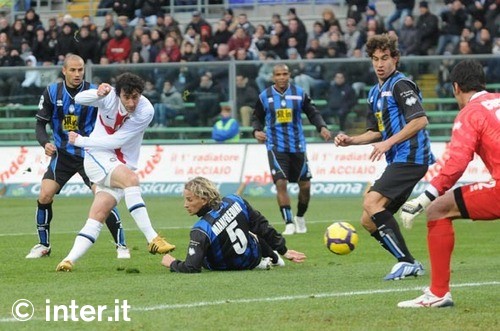 Right. So we have officially broken the curse by scoring a goal and winning a game at home. Hurray! Now the big question is, can we keep the momentum going for this trip to Bergamo? Since it is a well know fact that hope springs eternal so I am going to say yes. Yes Inter has turned a corner. Yes we can do it against Atalanta. Yes.

What: Atalanta Bergamasca Calcio v FC Internazionale Milano
Where: The adorable Stadio Atleti Azzurri d'Italia in frosty Bergamo
When: Wednesday, October 26, 8:45pm local time (11:45am pacific, 2:45pm eastern)
How to Watch: FoxSoccer.tv here in the states or find a stream (Rojadirecta, Ustream, and ATDHE.net)
Liveblog: I dont honestly know. This is a school day and I am not sure of Kirby's schedual. Check the comments below for if this will happen

Atalanta is actually a pretty ok team. As such, Inter's record against them in Bergamo is pretty evenly divided: of the 51 league games, Inter has only won 21 games, while drawing an additional 17 (that leaves 13 losses). Generally, Inter score more goals (83 for us, 55 for them), but we haven't had a big win since 2001 (2-4). Last year, Atalanta played in the Serie B. The year before, we drew 1-1 with goals from Milito and Tiribocchi:

Atalanta has had a great start to the season, and were it not for the six points they were docked for match fixing, they would up in the top four. As it stands, they have just one more point than we do. Which is sad. For both of us.

With two wins (Palermo and Novara) and a draw (Udinese), Atalanta are unbeaten at home. Plus, they won their last game 1-2 (away against Parma). They have two prolific goal scorers in Germán Denis (4 goals) and Maximiliano Moralez (4 goals), while Luca Cigarini and Matias Schelotto are filling the gaps with one goal a piece.

Colantuono has been playing a 4-4-1-1 and I suspect tomorrow will be no different. Look for:

Brighi, Pinto, and Manfredini are all injured while Doni is suspended for the next three and a half years (as part of that match fixing scandal). Anyway, they are a pretty good team and can definitely cause us difficulty. 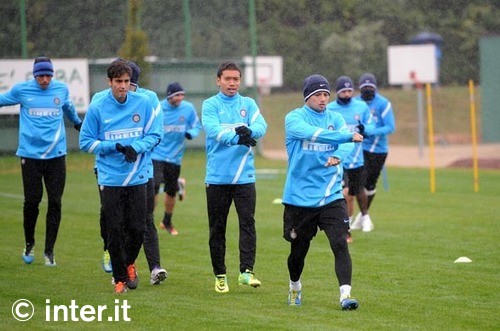 Train hard, boys, 'cause we need us some points!

CR has called up 21 players to go to Bergamo.

Basically, everyone else is injured. Well, Cristeg is ok but he went to go play this week with the Primavera squad. 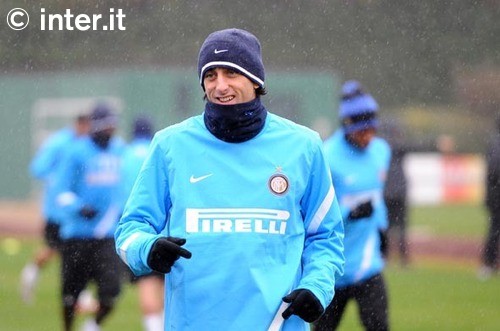 Milito ready for his starting role. I sure hope there is still some magic in those boots.

Ranieri already told the press that Milito will start tomorrow. Ok. That's a start at least. La Gazzetta things CR will do a bit of rotation with Cambiasso starting from the bench and Thiago Motta and Stankovic in midfield with Zanetti. The defense will be what it has been because there really isn't any choice. On the up side, that means Chivu will play center back which is better than seeing him at full back .

The only real addition to this squad over last year is Zarate. That's a bit worrying. I had high hopes for Ricky Alvarez and Luc Castaignos, but they just dont seem to be slotting in all that easily. And what about that Faraoni kid? He looked ok in preseason. Reports are that Ricky does great in training but, for some reason, just freezes up in real games - nerves or something. Anyway, these guys will have to start making a real contribution soon - the old guard isn't getting any younger. 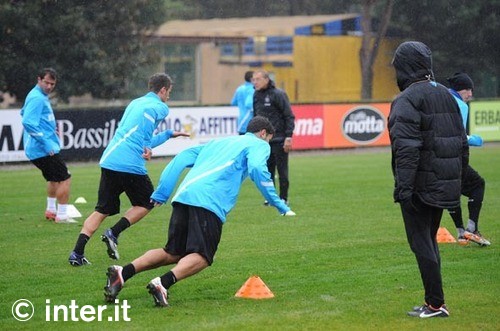 Seems to me if Faraoni can levitate he aught to be playing!

I think these next couple of game will come down to belief and determination... with maybe a little luck thrown in. This time, hopefully that ball will go in the net instead of hitting the crossbar. But if we dont believe, I dont think we have a hope. And that is what I hope Ranieri can do. All these guys know how to play football. They know their positions forward and backwards so at this point, the only thing CR can bring to the table is his ability to get the squad to believe they can win... even when we are losing.

So come on Claudo, show me some magic!

Injured or not, Coutinho is still cute as a bug's ear. Get well soon!

Dont forget, you can follow me and this blog on Twitter: @InterOffside. All the Inter fun you can pack into 140 characters!