Share All sharing options for: Atalanta 1 – Inter 1: Strive for Five! 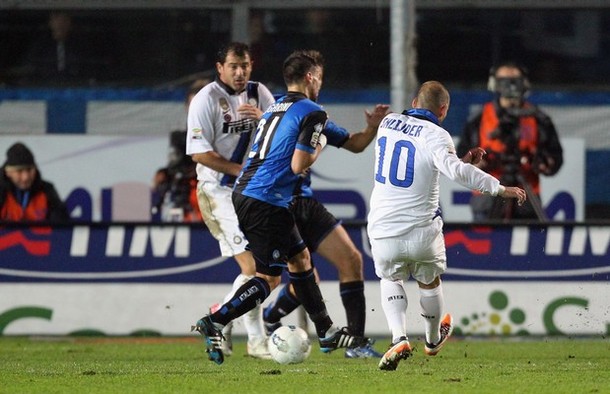 That’s right. It’s now 5 out of 8. Five penalties in eight games and all five of them were questionable at the very least. This time we have a Chivu and a Marilungo playing handsy and then a Marilungo dive while a few inches in front of Chivu so that when looked at the right way one could actually see the green of the field between the two from the camera angle. The linesman called in the foul and the referee made the call. And that was that.

I don’t mind the referee calling a penalty as long as we get equal consideration. Pazzini didn’t get his shot even after he got dragged to the ground.

There wasn’t much good here. The game from Saturday looked to take a toll on the energy and relative health of the squad yesterday. Maicon was banged up. Wes was banged up. Zarate needed a breather.

However, Cambiasso looked healthy and was basically the only thing holding the midfield together. I am not crazy about him playing so much considering his injury history and age. I don’t think that he did anything really special but he’s tallying up the minutes right now and doing the job. This means he ahead of others at this point.

I thought that Nagatomo did a really good job on that left wing. Look, we had a real problem on that position for a very long time and as far as I am concerned he’s doing a solid if not spectacular job. However, his speed and natural tenacity are things that just can’t be taught. All his other short comings can be worked on. He’s only just turned 25 and just coming into his own.

Some official for the team talked about the effect that Wes has on this team this weekend. They said that he speeds up the game for this team. I couldn’t agree more. Even when he made mistakes in the final third he makes the other team crap their pants when he’s running at them with his eyes up looking for that final pass or that sneaky, snakey shot. The only way that Atalanta had to defend against him was to kick him over and over until he left the game. I don’t expect that to change next game either, if he plays.

Castellazzi has his faults. He’s maddeningly slow off his line – not because he’s slow himself, but because he’s indecisive. He’s not nearly as springy as Cesar can be when he’s on. And he doesn’t have the sometimes preternatural response that Cesar can sometimes summon when needed. But he’s solid. He’s solid. He’s solid. He’s got very good positioning and he doesn’t give up on a shot – he’ll always give his best as much as he’s able. Also, he’s super cheap and Cesar costs around €5 mil per season before taxes double his yearly take home. I’m not saying anything, I’m just saying.

I think that I am going to say this about Zarate until the day he leaves the club – Zarate is the type of player we need to play up front with Pazzini… I just don’t know if he’s the player we need. All that being said, he’s been very good for us, if we don’t factor in his first game with Inter. He was also very good for us yesterday – it was his pass that set up Sneijder. When Zarate plays for the other players he’s very good. When Zarate plays for himself, its very easy to tell.

Anyway, here’s the way I see it; Zarate can hold the ball up for the rest of the team to catch up to the attack and he’s one of the few players we have that can take on a defender on his own, so at the moment I am happy that he’s on the team and he’s playing well. I would be just very cautious about any permanent deal we might think to offer him.

I want to make an honorable mention for Obi. It would have been my decision to start Obi in front of Deki if I wanted to rest Motta. When Obi came into the game, he looked like a spark of energy on the left side and ate Masiello’s lunch, if you know what I mean.

Diego Milito, it’s time to say goodbye. Yo. That’s all.

Was the goal Cesar’s fault? He was in no man’s land when the ball was crossed in. He was between coming forward and trying to get back to cover the header and in the end he was wrong-footed in noman’s land and watched the ball bulge the net. Hell, I could stand on the field and watch the ball dribble into the net for 5 mil a year. Where do I get to sign? Cesar is going to be MIA for the Juve game. Maybe it’s for the best.

Cris Chivu. Last week everyone was wondering where Chivu’s renewal is and why Inter isn’t running to resign him. I haven’t read any more of those stories in the last 24 hours. Want my prediction? He’ll have to come very cheap if he wants to come back next season. Or get his best buddy Wes to put in a good word. If you’re a big fan of Chivu’s I would get ready to say goodbye, ahemKirbyahem.

Someone in the comments said that if we are going to put Deki out there and let him fuck up, we might as well put a young player out there let them fuck up plus let them get time on the field. I think that this is the best thing for the team, but not for a coach to get a long line of pay checks from Moratti.

But, a low word of understanding by The President to Ranieri could go a long way to make sure that young’uns get a chance to put in some time.

Look, Atalanta at this time isn’t exactly a rotation game. As Johonna said, if it wasn’t for the points penalty for gambling that went down this summer that team would be around the top of the table. Right now, Atalanta is a good team and a lot of teams will lose points in Bergamo so a draw isn’t the end of the world.

It’s just my belief that if we are going to be drawing against Atalanta we could have had Obi playing the majority of the game instead of Deki. Or Alvarez. Or Crisetig.

And for the record, if Alvarez gets jittery playing actual games then the way to get rid of the jitters is to play him more, not less.