Groucho Marx was once quoted as saying, "Time flies like an arrow; fruit flies like a banana."

This saying has a lot in common with the game on Saturday. First of all, no one can actually prove that Marx said this and in some consider the attribution to him flat wrong. The ambiguity and double entendre of the word “flies” in these two sentences makes one puzzled on first viewing – puzzlement, kind of like this game - especially considering the well known saying, “Time flies.” Which by the way, is a mistranslation of the Latin, “Tempus Fugit.” Time in this case flies like a Shakespearean character who announces to the crowd, “We fly!” He doesn’t, in fact, go airborne. He flees; runs fast away… like a FUGITive. Get it?

Anyway, the point is that the saying is an example of someone getting everything wrong there is possibly to get wrong to a humorous end. You know, like the game on Saturday. The quote by itself is actually funny and gets funnier to me every time I see it. Also rather like this game.

Before I actually get to the very little of this game there is to look at before all hell broke loose I want to start at the end and discuss the fall out.

Slaps on the Wrists 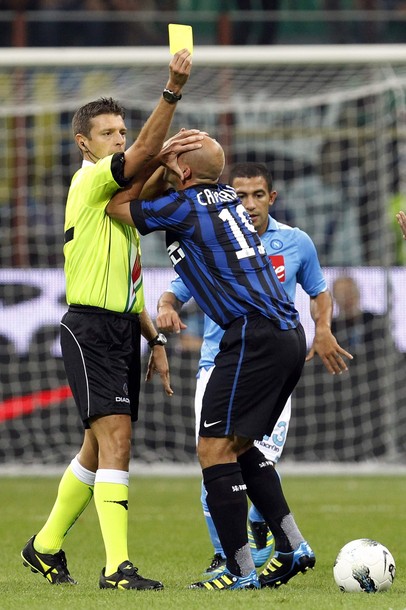 First of all taking a look at the punishments to Inter’s players and staff, one can come to the conclusion that the ruling body on these punishments concur that Rocchi was horrible and that he deserved all the guff that he got.

Ranieri who voiced serious – righteous as well, let’s not forget that – concerns at the end of the half was tossed out of the game. Rocchi didn’t have the actual balls to come into the Inter dressing room to do it, he sent someone else. Apparently Rocchi was under the impression that there were people who weren’t happy with his performance. By the way, nothing says that you’re guilty or lacking confidence or a scardy little bitch than when you try to do something like that through a third party. That Rocchi didn’t have the nerve to confront anyone from Inter says a lot when it came to Ranieri’s expulsion.

Okay he was expulsed, that’s the next game gone, right? But then look at the post game interview, where Ranieri criticizes the hell out of the Moron in question. No additional punishments.

Obi got his one game suspension which we all should have known that he was going to get. The ref put in his report that he thought there was a foul, then that’s all there is to it. The truth isn’t important; it’s the upholding of the ref’s word as law on the field, even if the ref is a certifiable maniac.

Zanetti, Cesar, Cambiasso, Cordoba, et al. were only fined with no suspensions. Compare that to Ranocchia, who also was thrown out unfairly as moviola had shown, who complained with insults and expletives and got 2 games added onto his 1 game suspension. Obviously it was felt that Rocchi deserved all the abuse that he got, whereas the game changing, moronic call on Ranocchia was seen as an aberration.

Moratti who had nothing but abuse for Rocchi’s character, questionable familial history and brain power was not mentioned in any punishment. Compare this to when Moratti has been banned and referred for punishment in the past. Obviously the judge in question decided that Moratti shouldn’t be punished for only stating the obvious…

Then there is Rocchi himself. Apparently he’s suspended for 3-4 matchdays, which isn't much compared to Mauro Bergonzi’s 2 month ban for daring to make mistakes against Juventus (You didn’t see, for example, the guys who gave Del Piero consecutive games with penalties for diving – one time outside the box - two seasons ago punished, you know what I mean?), but it’s still an indication who The Powers That Be consider to be in the wrong for this mess.

Bergonzi’s case is actually pretty interesting to compare with Rocchi’s because Bergonzi was actually held from performing at Juventus games for something like 2 seasons. There have been interviews given that stated that Rocchi won’t be held from Inter games. We will see how it shakes out, but I will be interested to see if Inter are going to be treated anything like Juventus in this case. My instincts say no, but there is always a chance of human nature surprising me, I suppose.

By the way, just to bring this little ditty to a close I would just like to point out 2 more things. First of all is that if you have any spare change whatsoever, the next time that Rocchi ref’s an Inter game, bet that an Inter player gets thrown out and that Inter gets a penalty against. To paraphrase Drew in the last blog post comments section, Rocchi is more likely to throw out an Inter player and/or award a penalty against Inter than not. Best example of this? Remember the Wesley clapping incident and the “handling” of Lucio? I put handling in quotes because in the actual laws of the game that referees are supposed to follow handling the ball isn’t a foul unless there is intent, that is, unless you mean to. Replays of the Lucio “handling” can be found in the last blog post comments section where someone put up a link to just some of Rocchi’s missteps against Inter – some 3 years or so worth. You can see for yourself that his head is turned away from the ball when it hits his hand. Also, although his arm is raised, it isn’t outside the plane of his body – in other words, he isn’t reaching out to block the ball, the ball would have hit him in the neck or face or something – it’s a classic no call situation that turned into an expulsion and a penalty shot.

Secondly, the last time Inter lost at home to referee error of this magnitude before this match was against Juventus, you guessed it, Mauro Camoranese scored an offside goal – sorry, waaaaaay offside goal. Yeah, I know, I wasn’t surprised to learn the team and circumstances of that goal either.

And here’s an interesting post-script. I got some research for the above on a website called WorldReferee.com. It’s basically a reference for refereed matches and bio blurbs. The people who run this site really, I mean really don’t like Juventus. Maybe I am too harsh on referees…

It’s unfortunate that so much of the fallout and chatter about this game has been about what happened after the game, because before the ref decided the game at 30 minutes or so, it was a beautiful game to watch as an Inter supporter.

I don’t know who had a better chance to win the game after 30 – assuming the teams were allowed to play without shackles – but Inter looked up for it, energized and confident. There were nice chances that were created, without Wesley mind you, and it just looked as though Inter were going to win big or be in one of those matches where we were going to get countered once or twice and lose.

The play where Obi got his first caution was actually a beautiful tackle that showed speed and technique. Even the play that eventually proved his expulsion showed Obi going shoulder to shoulder with the Napoli player – all this after Obi was beaten initially. Obi just looked like he deserved to be there at the left center midfield position. He really earned his place.

Conversely, Alvarez looked a step slow during the match. I thought that he saw the field well – he made all the passes that I thought he should have – and he had a nice laser beam of a shot at one point, but his reaction time was way slow. Yesterday in an interview he admitted that Italian football is a lot faster paced than Argentine. This is really the case across the board in South America. Any player coming from South America needs to adapt to the speed of the game. I thought Ranieri was right to choose him, though. Alvarez is much more willing to come back and help than Coutinho is and a game like this needed everyone to help out.

I thought Samuel looked poor again. I am really of the thought that when Ranocchia gets healthy again he’ll come in for Samuel more and more as the season moves on. I don’t think that I would find anything wrong with that. Ranocchia is on the way up. Samuel, I am afraid, is on the down slope and gaining speed.

Maicon came back from his prolonged injury with a storm of good play. There wasn’t anyone more dangerous in the first 30 than Maicon speeding down the right sideline and there was no one from Napoli who could handle him consistently. Given a full 11 men and more time to train, I can only hope that we see a well rested and charged Maicon again. Last season he looked worn out and dull. I am hoping for a different player this season.

Last but not least I want to say how interesting it was to see a Serie A team so ruthless that wasn’t us. There was no Cavani on the field and their first goal plus subsequent man advantage was absolute crap but Napoli was as ruthless a team in exploiting another team’s disadvantage as I have seen since… us. If they can keep that angry edge and maintain the incredible amount of energy that Mazzarri’s teams always seem to run out of late in the year than they are looking at a very “Italian-esque” type of season. Practical, direct, cunning, counter-attacking and ruthless. In other words, all the things that we used to be.

I just wanted to point out somewhere that the U21 team that has been or will be convened by Ferrara for the next match contains something like 6 players from Inter’s youth academy: Bardi, Santon, Donati, Caldirola, Faraoni, Destro. When I heard that Ferrara was to be the new U21 coach I was skeptical and thought that he would follow in the footsteps of his mentor Lippi and make the team a political animal. But, obviously he took those players he wanted without a bias against Inter, again, unlike his mentor who wouldn’t even come to training.

This weeks MIPOG is going to Joel Obi. He played a hell of a game for 30 minutes before someone not nearly as good at his job as Mr. Obi will one day be decided arbitrarily to cut it short. Obi ran his ass off against Napoli and held his own on several occasions with Maggio, an Italy International. We need some younger midfielders and Obi is stepping up. I think it would be a shame to see us go back into the market to get another midfielder in January to take him out. I would rather see us get out of January with a central defensive player who can play organized, move quicker than Samuel and pass with skill from the back. 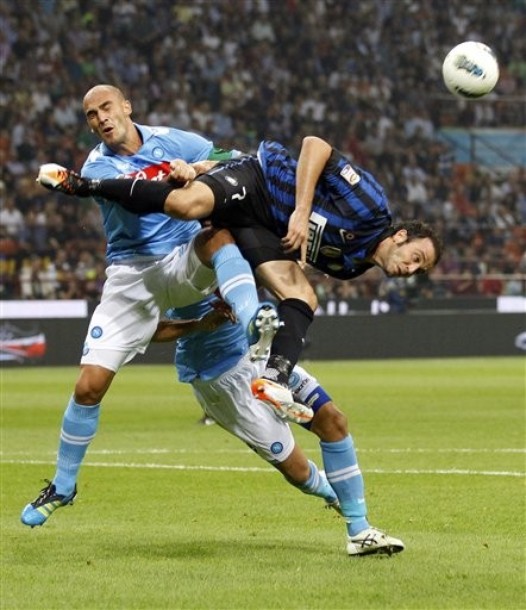