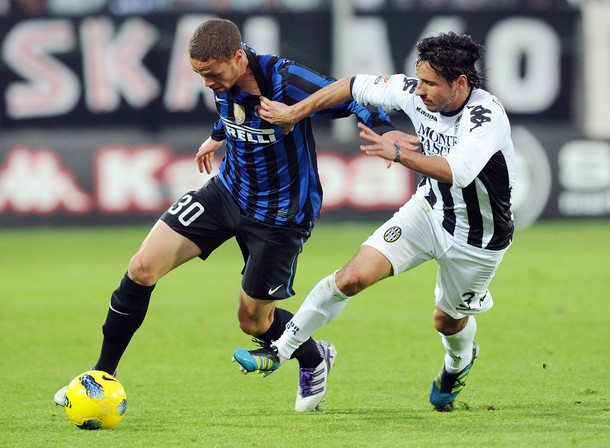 If you play poorly, as I have said several times before, you have to expect to lose. Inter played pretty poorly last weekend and I was half expecting a loss. Last minute wins, work too. It’s also an indicator that luck, or chance or whatever might have finally decided to smile on us.

But all that doesn’t forgive what was a poor showing against a team that we really shouldn’t have had to suffer so much against. Look, I get that there are no easy games here – especially when you are coming into town at 16th place. And I get that this is the 3rd game in a week for this team that is bringing back a lot of injuries and young people to the field that could cause some discontinuity. But, having said all that, we really should be in super focused, eye of the tiger mode or something. We should want to take the game to Siena with attitude and a desperate need of points. It didn’t look like that on the field to say the least.

Cesar didn’t have much to do although things probably got a lot more harrowing than he wanted it to be in the second half. Cesar screaming at his defense is a good thing as far as I am concerned. When Lucio is there, Cesar probably holds his tongue more than he should to his former Brazil Captain out of respect. But to my mind, Cesar needs to take a firmer hand in the back of the defense for the rest of the season. No one on the field has a better view of what’s going on.

Ranocchia and Samuel were very decent, Ranocchia more than Samuel in my opinion, but I understand that not everyone holds that opinion. And by decent I mean exactly that, just okay.

Zanetti was the class of the group although the toll is beginning to tell considering the zip he had in his step two weekends ago. This last weekend he seemed like he was dragging a bit.

Nagatomo has been struggling lately and he did so again on Sunday. Last season he had several games under his belt before he looked comfortable but this season he is competing with several players for the same position and he’s been away to the trainer’s table. He hasn’t had that continuity he had last season and he’s not going to anytime soon. He’s got to be a little more flexible and be ready to play or not play – play on the right or on the left. I still have faith that he’ll make good, but he’s going to have to step it up.

As we all saw, the midfield went through a metamorphosis at halftime. The first half midfield kept possession and built up play slowly. It played defense by keep away and constructed just about nothing offensively. The second half midfield failed to keep possession at all since the two of the better passers and dribblers in the “midfield” – Zarate was essentially a midfielder in this game – were subbed out. In their place were put Obi and Castaignos. At the time, I thought that taking both of those players off at the same time was not the right move. Someone, I thought, should be there to serve the ball for Pazzini.

As I suspected we did much worse in possession but what I wasn’t expecting was that Obi was put out wide-ish on the right. There was some refiguring after about 15 minutes but there was still a lot of confusion and the team looked very out of sync. It wouldn’t be until the 80th minute that we start to actually dictate play instead of react to Siena’s play.

Quickly looking at the midfielders, Cambiasso, Zarate, Obi and Alvarez were roughly the same meh in two different places on the field. Alvarez didn’t do much out on the right wing and although I thought he was meh I didn’t think he was that bad. Zarate was very meh and I would have been happy to see him go even though he was actually being something of a team player by being placed so far out of position. As laudable as it was for him to sacrifice himself he was ineffective. Cambiasso was running around, he just wasn’t accomplishing much – Siena was sauntering right through the midfield and he was chasing butterflies out there. Obi we already discussed was out of place and then moved around. He needs time on the field – he was doing so well as a full time player – it would be a shame if the hard work he put in was for naught because he was denied time and space.

Speaking of wasting time and space… I think we all know who I am going to point the spotlight on here. Deki was bad. He was really bad. He was so bad that his presence had a negative impact on the team… again. Generally speaking, most players have a skill set that can be used to some effect but Deki looked so slow and poor I was very frustrated that he wasn’t asked to vacate the premises at halftime. I don’t know what keeps Ranieri selecting this joker. I thought Deki needed to go when Mancini was replaced with Mourinho. He had a reprieve season after that and he’s been shit since then. I would wish for 1 minute of power at this club so I could kick him out and then change all the locks.

On the flip side, Motta had as good a game as could be expected since he was basically manning the entire midfield on his own. Don’t get me wrong, he wasn’t great – but he was doing his job. His job is to distribute the ball and to stick his foot at somebody every now and then and he did it. It was his pass that sprang Castaignos and in the first half he was very instrumental in keeping possession. If only he could stay healthy.

Pazzini didn’t do a whole hell of a lot on Sunday but considering he had a nice header that went just wide on almost no service at all, I thought that wasn’t terrible. Look, every player has some skills and how those skills are used is a measure of how good a coach is. Pazzini’s skill set is to find a way to get the ball into the net with an economy of touches. He has to be close to the net. He needs someone to set him up. But if he can get service – generally from the midfield – he can be extremely effective. However, the problem with this Inter team this season is the midfield play and as a result Pazzini’s production is going to suffer.

Also, by association, Milito’s production is going to suffer as well. Remember, Eto’o often played set up man for both of these guys by virtue of actually being able to take on defenders successfully and in the resulting chaos of defenders desperately trying to get in front of Eto’o as he beat all comers Milito and Pazzini could find some space. Without credible midfield play, without Sneijder and without Eto’o Milito and Pazzini are going to need someone else to set them up.

Along the same vein, Luc had piss poor service this game. However, to his credit I saw him coming waaaaaaaaaay back to help out and then bust his ass going forward so that if the team was on a break he could contribute. His goal was a nice turn and shoot that made it on net – another problem we have been having – and squeaked into the corner. It’s not going to make any list for goal of the week, but it means a lot to me for this reason: it’s a young guy who when given an opportunity to win the game he didn’t freeze and he didn’t lose his head. He just did his job. 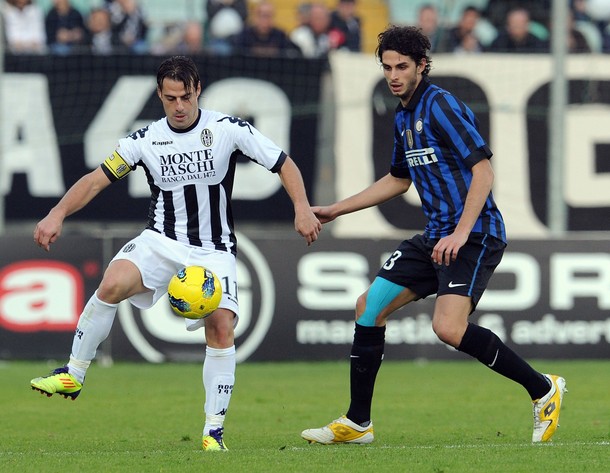 At the beginning of this season Inter was being ridiculed for taking over as the “old age home” from Milan of two or three seasons ago. However, consider all the players who have been finding space in the team and really look like being solid contributors. Yesterday we had Ranocchia, Nagatomo, Alvarez, Zarate, Pazzini, Obi and Castaignos all on the field at various times. In this group Pazzini is the venerable old timer at 27 and that really makes me hopeful that in the future we’ll really be able to compete with other big teams both domestically and foreign as long as we are able to progress these guys forward.

My real problem is the Militos, Dekis, Lucios and Samuels of this team. Don’t get me wrong I love Walter Samuel for all he’s done for the team and the monster defender he still is – when he’s healthy. But that love is really beside the point here today. He’s 33 years old and of the 5 full seasons he’s been with Inter he’s only actually played in around 150 games. Sounds like a lot, right? Five full seasons with a team that has made the round of 16 in the Champions League for over a decade on the bounce? All those extra games translate to around 50+ games per season. That means that in 6 full seasons, Walter has played in roughly half the games that the team needs him for. That’s not the number of games that you want your starting centerback to play. And I can’t imagine that he has too many as a starter left considering how many injuries he’s had in his career.

And my problem isn’t the players per se. It’s the fact that the team basically has used these very good players in their early thirties to hold off the rejuvenation of this team that should have been happening several seasons ago. I would love to see Obi taking a bigger part of the midfield that’s being incredibly given to Stankovic. Stankovic! Has he had more than 1 or 2 good games in the last calendar year? I would happily give up those wonder goals of his for more consistent/energetic play by an Obi - or dare I dream – a Mariga, or a Poli whenever he feels like coming back, or a Crisetig maybe soon. On this same topic has Inter sold Krhin entirely to Bologna? Why can’t we bring him back if he can be a contributor?

And I know that technically speaking Javier Zanetti should be included in this group… but Javier is a little different. I do think that he should be taking a smaller role with the team, maybe coming off the bench more, but I wouldn’t mind if he stayed around a couple more seasons despite his age. I mean, where is it written that he has to play every game to be with the team, you know?

In January we already know that we are getting at least another defender from Brazil. The deal for the 20 year old Juan Jesus is done. It looks like the 24 year old Kucka is coming although there seems to be some confusion about this still. Inter are still in South America looking for youngsters to fill in the defense and midfield. Inter have several young players currently on loan that could some day fill in as a forward of the future. But that is a blog post for another day.

For this game? The closest thing we are going to come to a My Inter Player of the Game is going to be Motta. All game long he did his job. He wasn’t super spectacular but not only was he the only midfielder to complete passes after halftime but his assist to Luc showed a real vision to pick him out of all the bodies on the edge of the area. 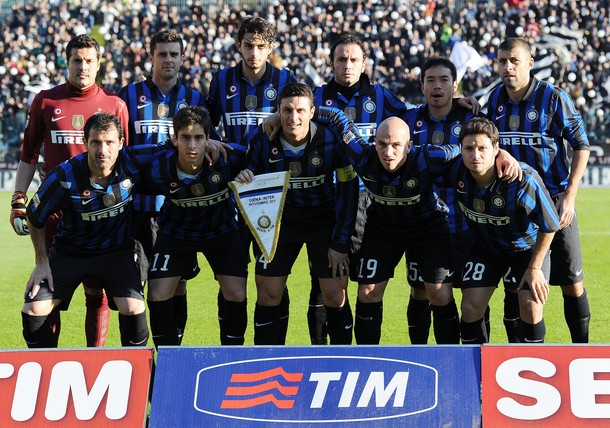