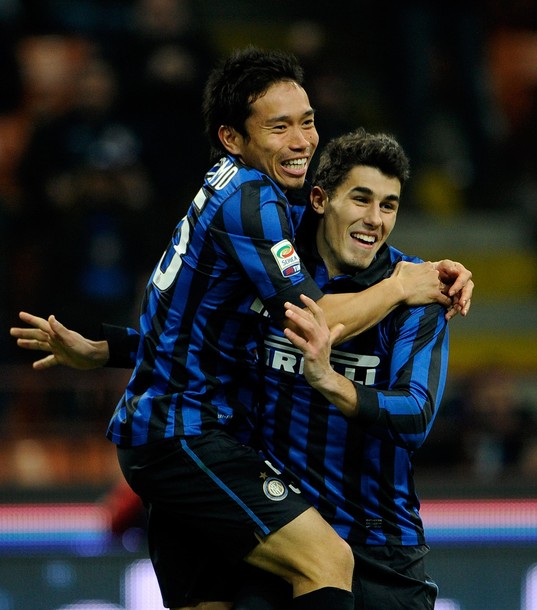 Quick quiz, what do the numbers 29, 19, 23, 19, 31, 27 and 25 mean to you? These are the ages of the last 7 goal scorers for Inter. For whatever success that is happening for this team offensively it’s the young guys who are making it happen – 4 out of 7 of the last seven goal scorers under the age of 25. Which is why it’s so disappointing to still see Milito out there still, but more on that later.

If you want my opinion, it’s because of the very good play of the midfield that won the game yesterday. The defense was screened well up the middle by the Cambiasso and Motta tandem. The attack was supported on the edges by the wingers Coutinho and Faraoni. Fiorentina has problems this season no question, but Inter played this game very well; one can’t help but wonder where this play was in the second half of a very winnable game against Udinese.

In an earlier blog post I made the statement that the points that were up for grabs in the league this month of December would define whether or not we can escape this terrible season. Before the game against Udinese, Inter collected 14 points in 11 games – a pitiful 1 point-ish per game and residence at #16 on the table. Two games into the decisive month and we are 3 points out of 2 games – that much hasn’t changed – but we are now midtable-ish.

Fiorentina didn’t get their first shot at goal until late in the 2nd but regardless of that Cesar didn’t let the lack of business dim his concentration, which we all know is his kryptonite. The score might be a little high for a guy who sat idle for 75% of the game, but for Cesar, this is a good thing.

For the first time I can remember, Inter potentially have decent defending and the ability to advance the ball through both fullbacks. Maicon and Nagatomo worked off each other well. The ball went up one way and then it went up the other. There was a ton of cross field passes when congestion one way meant a clear way up the other. Samuel and Lucio did their duty in the middle. Ranocchia, who has played in nearly half the games this season, was rested through player rotation, says Ranieri, so expect the “Italian Youth Are Rotting on Inter’s Bench” article from Goal.com.

The midfield had some pep in its step yesterday and forgive me for saying this, but I think it’s because there were 4 real midfielders playing with Zanetti taking a powder for a red card suspension. I think everyone here knows how much I love Javier, but it might be time for him to start considering his twilight years as a utility sub. The midfield looked completely different without him in there and his suspension gave Faraoni some space to show that he’s a viable option in the midfield – speaking of utility, Marco spent almost his entire youth career as a fullback or wingback and as recently as last season put in minutes as a midfielder and attacking winger.

Coutinho, Cambiasso and the very impressive Marco Davide Faraoni were energetic, terrier-like while on defense and complimentary on the pass. Motta was less energetic and terrier-like but very accurate on the pass.

Muntari even put in a good shift at the end, even if his inclusion was baffling to some. I thought Ranieri was protecting Coutinho and adding some steel to the midfield, which whether intended or not is what happened. Ranieri stated that Coutinho needed to come out and he needed a left footed midfielder. Fair enough. There are those who don’t like Muntari here – and on a personal level I am one of them – but the guy is a serious defensive midfielder, a very good tackler and has a halfway decent pass. If he wasn’t making a salary so outrageously disproportionate to his role and wasn’t prone to freaking out once a season then I wouldn’t mind him on the team. Comparing apples to apples he’s a better holding midfielder than Burdisso, for example, was a defender and both are pretty gritty players, have a problem with controlling temper and composure. And yet, in the past I didn’t sense the general fan dissatisfaction with Burdisso that I do with Muntari. I really hated having a player like Burdisso on the team and I am in debt to Mourinho who kicked him out at the first chance he had. When Muntari leaves, I will be relatively happy, but mostly because of personality, salary insanity and bench space considerations.

To be honest, most of that 6.0 comes from Pazzini who made a lot of runs, good passes (even an assist) and took a lot of chances to score. Even if his goal was pretty fluky, the fact that he took that shot shows that he was very hungry to score.

I don’t think that Milito had a very good game at all and it seems like a lot of folks agree with me. Did he take a shot on net and force a save? He worked hard and ran hard before the attack on his ankles but he wasn’t doing his job – shooting and scoring. Zarate added nothing when he came on. How about using Castaignos in situations like this? The team is 2 goals up and Fiorentina isn’t doing much, it’s a perfect time for the kid to come in and get some minutes in, I think, anyway.

The Inter Primavera team is doing very well in all their competitions so far. They are looking to control their own fate in the Next Gen Series after what by all accounts was an amazing game against Tottenham – all that was lacking was the goals. Inter Primavera just beat a good Udinese Primavera to go inside the top five in their table with a game in hand.

Lorenzo Crisetig is the leader of that team at the ripe old age of 18. Lorenzo, who has been with Inter since he was 14, played in a Champions League game on September 27 where he came on for Chivu and played in the Next Gen Series the very next day, according to his Wiki page.

Anyone else excited about the potential shown by these kids? I get really excited when I think about Crisetig, Faraoni, Ranocchia, Coutinho and Nagatomo someday perhaps cashing in on the experience they are getting right now. It gives me a lot of hope considering the poor season Inter are having right now.

It’s Coutinho for me and it’s not even close. He was a catalyst for all the attacking that came out of the left side of the field and there was a lot of attacking from that side of the field. He also had a hell of a shot that frankly, I am shocked that didn’t score. He attacked, he came back to defend and when it was his turn to come off, he did so with class. Good job kid.