Genoa v Inter: A Game in the Hand is Worth Three Points?

Share All sharing options for: Genoa v Inter: A Game in the Hand is Worth Three Points? 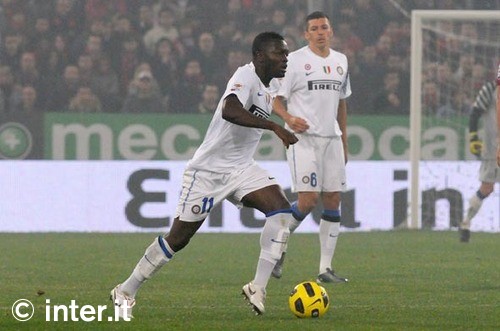 Hurray! CenturyLink came and fixed the phone so the Internet is back in the house (stupid big trucks and low hanging wires). Luckily, the cable is still around so I got to watch the game (alone, all alone, without my Internet peeps) and was heartened by what I saw: young players out on the pitch making a real difference. Hopefully, we can take that momentum and do some damage in Genoa (figuratively, that is). Three points would put a whole new spin on this season. Well, or at least help alleviate my Sports Related Stress Syndrome.

What: Genoa v Inter, make-up game
Where: Lovely Genoa, in the historic Stadio Luigi Ferraris
When: Tuesday, December 13, 8:45pm local time (11:45am pacific, 2:45pm eastern)
How to Watch: Since this is a midweek game, everyone is on board. Watch this live on FSC and various channels around the world. If you are not on that list, try finding a stream: Rojadirecta
, Ustream, and ATDHE.net

So we are finally starting to creep up the table - slowly (glacially) but hopefully steadily. As such, we come to Genoa just a point behind them and looking to leapfrog. Unfortunately, the Luigi Ferraris is a tough nut. Of the 59 times Inter has gone there for Serie A games, we have only won 15 games. Plus, they have outscored us 103 to 74. Now, it isn't impossible, we have managed to take full points there three years running. Last year, the man of the hour (and a half) was Muntari (go figure). His first-half injury time goal sealed the deal.

Genoa are shaping up to pretty ok this season. They have an excellent home record - only losing one game (to Milan). Overall, they are just a point a head of us on the table with a slightly better goal differential (0 to our -2). This, I think, is the perfect test for our improving (?) squad: not too difficult (like Udinese) but not a cake walk... or maybe a team the squad doesn't take seriously. Anyway, this may not be such a bad time for this makeup game. Sure, we dont have all our injured players back but we at least seem to be learning how to make do. 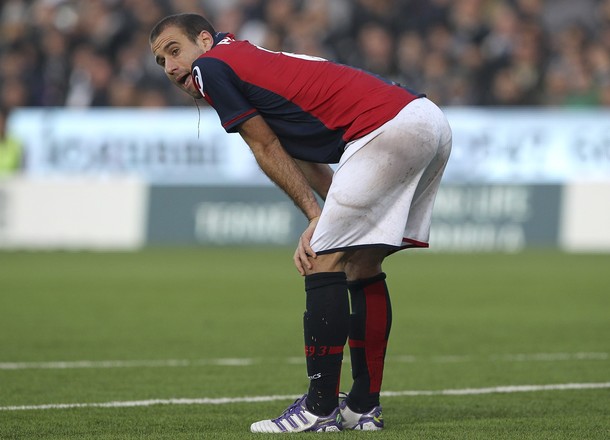 Palacio is just all kinds of wrong. Rat tail and... er... hirsute behind {shudder}.

Genoa has lost three of their last five, most recently, they beat Siena 0-2 away (remember how we struggled against Siena?). Genoa's biggest goalscorer is he of the horrid rat-tail, Rodrigo Palacio. Which is a bit of a problem for them as he picked up a groin injury in that 0-2 win and will be out for the rest of the month. That leaves Kucka, Marco Rossi, and Veloso to pick up the pieces. Fortunately for us, Palacio has as many goals as those three put together. Now, I dont wish anyone to be injured but I am also not going to look a gift horse in the mouth. At this point, every little advantage helps. 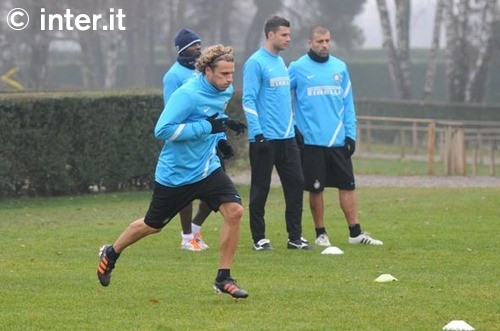 CR has called up 22 players:

Ranocchia was originally on the list but he picked up a “muscle problem” during training today so he didn’t go to Genoa with the team. Milito is suffering from an ankle problem but may be available. He will have to pass a fitness test before the game. Maicon is being rested so that he doesn’t re-injure himself, while Chivu, Jonathan, Stankovic, and Sneijder are just plain out. If fact, Sneijder is so out that he is on leave right now.

And yes, that is Diego Forlan’s name you see on the list. But before you get all giddy over the prospect of He of the Divine Abs playing, Ranieri has already said that he will start on the bench. Which is a step up from watching in the stands, I guess. I have no idea what is going on with Poli. He seems like he is fit but he just doesn't seem to be able to make the pitch. 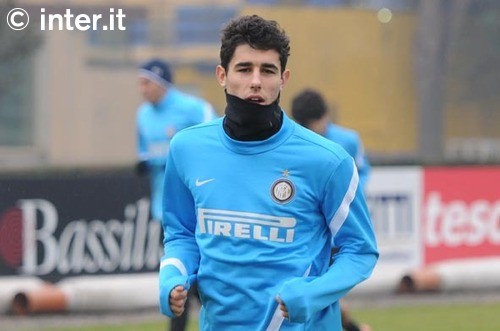 This Davide is well on the way to making me forget about that other Davide.

So, line-up wise, where does that leave us?

If Milito is healthy, then probably much like the Fiorentina game with Zanetti in for Maicon. If Milito isn't, then I guess we still see much of the same with... Zarate? instead of Milito and, of course, Zanetti for Maicon. If not that, then I dont know what. I suppose there is always the possibility that CR throws in a Castaignos or maybe an Alverez, I cant read him (and his face makes me angry... still... I am not proud about that but there you go).

Alright. Down to brass tacks. This season has been manic and you just never know which Inter will turn up when the whistle blows. We are managing to scrabble through in the champions league but this Serie A thing has just been disastrous. A win tomorrow wont fix everything but it will make us fans feel a little better. Plus, it would drag us up into almost Europa League territory. Yep, upper-half table real estate. It may not be the rarefied air we have fans have grown accustomed to, but it sure would be sweeter than the mid-table purgatory (or the bottom table hell) we have been inhabiting.

Zarate and Coutinho look minuscule when standing next to Maicon.