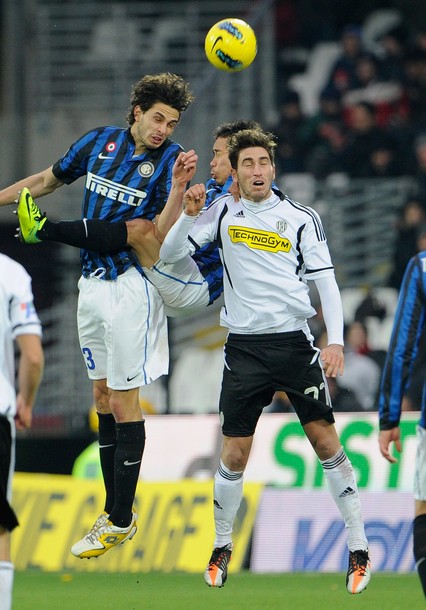 A couple of years ago, during seasons when Inter won Scudetti, they would often win when they might not have been dominating in all phases of the game. But truth was that while Inter might not have had the edge in possession or shots or some other game stat, they made up for those deficiencies with efficiency in front of goal and defense. If Inter created 4 chances in a game, one would go in and then they would defend like crazy.

It drove other teams nuts to know that they had an edge on a team like Inter and couldn’t put them away. This truth, like most things, was subjective. Other teams during Inter’s successful run in the 2000’s might have had a better striker or a more complete midfield but very rarely did any of those teams have a better defense and goalkeeper. And while those other teams might claim some form of domination due to possession or shots on goal, what they didn’t have was any claim of dominance in defense – that group of people that everyone forgets about when it’s awards time.

It’s kind of like playing Barca all the time. You only get credit for your attack – dare to defend well and you must be weak, or not good, or evil anti-football people for following the trend of history in the game for the last 70 years.

Yesterday, it could be said that Cesena created more or attacked better. They had Inter on its heels more than they probably should have considering the discrepancy in payroll between the two teams. What can’t be said was that Cesena defended better.

It was a lack of personnel or organization but Cesena definitely had to rely more on fouling in their defensive third – I would say tactically foul, but that phrase doesn’t seem to mean a whole lot anymore. Those fouls gave Maicon his chance to lob a sweet, sweet ball right to Ranocchia’s melon and thence into the netting. A poorly positioned and unwise goalkeeper completed the package. That Inter and we, the fans, were fortunate goes almost without saying – only almost, because I am actually saying it here - quite a few variables had to come together to make this thing happen.

But when it did happen Inter defended like absolute animals. I can’t remember how many times a last minute recovery by a defender saved the team’s bacon and the structural integrity of the walls in my office. All of them on the backline got into the act and you could see the sacrifice they were making in throwing themselves into the path of the ball or the attacker when they got up slow or favoring a leg or grimacing in pain and discomfort. Amongst many other things, this kind of passion for winning and dread of losing that was missing for those games in September and October.

To this point - and then I’ll move on - here are the scores since the start of November, including CL games, when it’s increasingly looking like when the light in these footballers tiny brains went on: Lille: 2-1(W), Cagliari: 2-1(W), Trabzonspor: 1-1(D), Siena: 1-0(W), Udinese: 0-1(L), CSKA: 1-2(L), Fiorentina: 2-0(W), Genoa: 1-0(W), Cesena; 1-0(W). Using my amazing math skills I count 6 goals against in 9 games since November started. I also count only 2 goals against in 6 games by Serie A teams in this span. Makes you feel good, huh? Want me to bring you back down by reminding how many of all those goals for (Inter scored 11 goals for in this period) were scored by our attackers? Yeah, I thought not.

There were a couple of moderately lame attempts early on – here I am thinking of Candreva’s shot towards the side of the goal that was parried handily – and I was getting a little irked by all the rebounds Cesar was putting back into play, but that last save where he was just in the perfect position and used the reflexes of some distant ape-ish primordial ancestor to come up with that deflection… sweet. He’s continuing to come off his line very well.

This score would have been higher except for the allowance of the shot that allowed Cesar to tap into said pre-evolutionary primate dexterity. Across the board I think that everyone had at least a decent showing – Ranocchia even without the goal and Maicon who looked a little off to me – to very good showing – Lucio was everywhere and always and Nagatomo continues to give the opposition fits offensively and defensively. I was really happy with this group considering the fact that they were basically left out there on their own. The midfield didn’t show up at all yesterday…

They weren’t terrible, as they were able to hold possession a little bit here and there but defensively these guys stank up the joint. Especially I am thinking about Coutinho, whose performance I was not a fan of.

I didn’t think that he did jack squat for the half that he was in there for. First of all he was bullied by Comotto up and down the field. He kept trying to use his energy to get something going but there just wasn’t anything happening. His passing was off – but he wasn’t alone in this, that’s for sure - and frankly Coutinhno who isn’t moving great, is intimidated by a journeyman player on Cesena and isn’t having a good passing day needs to leave post haste. And he did. I have no problem with that.

Zanetti, as much as I love the man, had as poor a day as Coutinho on the other side, but was left in the game for some reason. I don’t think I saw him complete a pass all day. Know what I think would have been an interesting idea to play against a team like Cesena who likes to attack the wide spaces? How about the same two guys who shut down Genoa’s wide men brilliantly a game ago? Tinker, tinker, tinker.

Motta and Cambiasso didn’t have the best games of their careers either, but they were better than those other two midfield jamokes. Obi was a better option than Coutinho and for the first part of the second half he looked like a real protagonist getting his nose dirty and charging up the field, but he needs some tutoring on what to do when he gets there because he looks indecisive when it’s time to stop running and make a pass, cross or shot. He’s going to need our patience and game time to get there though. I hope he gets it.

Deki’s inclusion into this game is both anti-climatic and sad.

Pazzini looked like he couldn’t be bothered a lot of this game, but he did come back to help on defense for free kicks and won a couple, so I give him credit for that. The shooting in general for this game was mind-bogglingly bad. Obi and Milito both tried long range shots with players in front of them waiting, nay, itching to receive a good ball to pass them clear and take a good shot inside the area – you know, where you might find a higher percentage of actual goal type stuff.

Milito started this game. I don’t have too much to add here but a quizzical look that includes a dash of incredulity. And some eye-rolling.

Deki tried a long range Hail Mary and had the nerve to brag about how close it came to going in as though 1.) The team hadn’t played so lousy all day that everyone was waiting on what seemed to be the inevitable Cesena equalizer 2.) He wasn’t playing some kind of sick Give the Ball Away Bingo whereupon he was able to mark in the box World’s Most Moronic Throw-In 3.) Upon seeing him going into the game millions of fans didn’t ask, “WHY!??!!!?!” and then break down into tears as we contemplate a different, parallel Earth in which the coaching staff remember that Poli and Alvarez are on the team.

Forget the MIPOG. Or rather, give it to the entire defensive line including Cesar. I hope we can get our shit together before Lecce. We need those points.

Also, the Primavera is playing PSV tomorrow (December 20) in what will hopefully generate the point they need to advance. 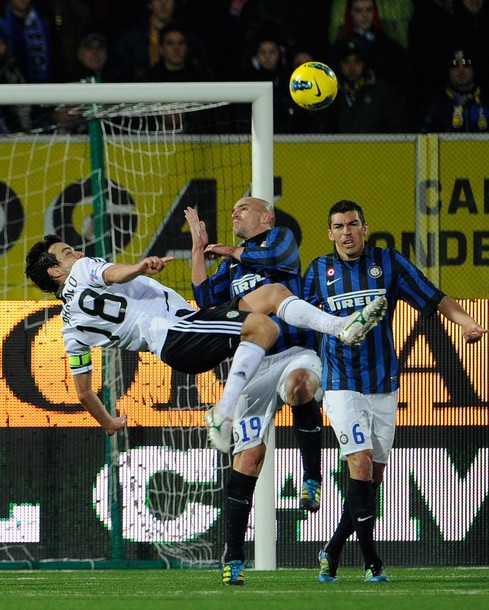