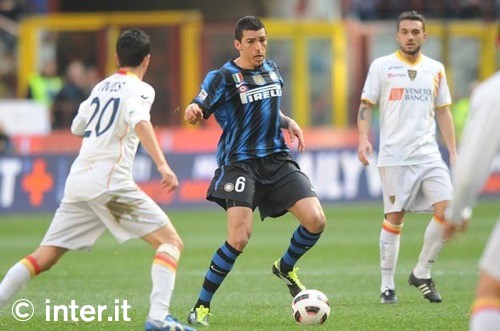 This upcoming fixture was supposed to be Matchday 1 but there was a player's strike so the game was postponed... until now. Which is a bit of a slap to the Player's Union because one of the things they want is a longer winter break. Whoops. At least we dont have to travel (although I bet the weather is better down in Lecce than Milan right now). As I am sure you all know, this is a must win if we want to cling to fifth.

What: Inter v Lecce
Where: Home, sweet home
When: 8:45 local time (11:45am pacific, 2:45pm eastern)
How to Watch: I dont even know anymore. Last time my source said the game wasn’t going to be on tv then it was so clearly I am not the authority on this. If anyone has a good stream, please share.

THE GHOST OF LECCE PAST

As a rule, Inter does not lose this tie. Of the 14 times Lecce have come to Milan, Inter has won 13. Sure, we did lose that one time in 2000, but I figure that is the exception that proves the rule (right? right). Even better, Inter has outscored Lecce almost 8 to 1 (39 goals for us, 5 for them). This is most definitely a game that history says we win. Last season, it was a second-half header from Pazzini that kept the clean record. Well, that and my wild cheering - I was at this game at the San Siro, you see. It was a heady time, before the second derby, when there was hope that we could leapfrog Milan and take it all. As I recall, despite the low score, it was an exciting game and I thoroughly enjoyed myself (even though I had a terrible head cold).

Remember how badly we were doing last month? Well, as terrible as it was, poor Lecce has it worse. They are dead last. Dead. They have only won two games this season and drawn an additional three. Bad news. They haven't been sitting back though, they have scored 16 goals (only two less than us). Unfortunately they have allowed a whopping 29 (and there is the problem). And with all those goals you get some spectacular games: 3-3 against Parma, 4-2 against Napoli, 3-4 against Milan... crazy crazy games. In their last five, though, they have lost four and drawn one. Lecci is having a bad year.

Well, with all those crazy games you have lots of different goal scorers: 11 different players are on the sheets for Lecce. Davide Di Michele wears the golden boots (4 goals), while Grossmuller, Giacomazzi, Cuadrado and Berolacci all have two goals. There are some familiar names among the single goal-scorers, including Massimo Oddo and supposed Milan Phenom, Rodney Strasser (famous for being kicked by Ibra in training).

There starting keeper is Julio Sergio but he is injured. Unfortunately, so is their back-up keeper Benassi. Goo d think they have four because it may be time for either thier home-grown baby keeper Davide Petrachi to get a run out (La Gazzetta thinks so). And that worries me. Can you imagine having your Serie A debut at the San Siro while playing Inter Milan? You are going to be pumped out of your mind. He could have the game of his life against us. 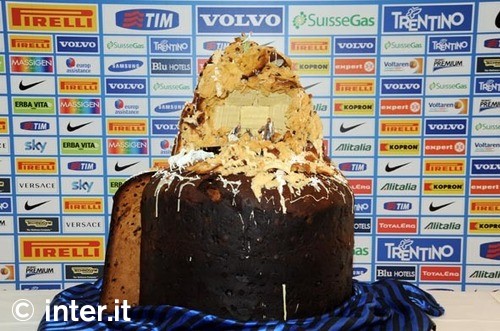 Wow. Someone really their panettone!

So, no Deki this time out. Neither is there a Sneijder to be seen. Jonathan and Chivu are also still injured. Alrighty.

I would go into formations, but I am not sure there is really a point. For sure it will be 4-4-2. For sure Pazzini and Milito will start (ugh). Really, I think think the only question is who gets the outside midfield spot, Poli, Alvarez, or Coutinho. The rest is pretty much the same as it has been. Which is ok, so long as it works - even it if is held together with bailing wire, chewing gum, and duct tape. Please oh please, CR, do something more wonderful in the new year. 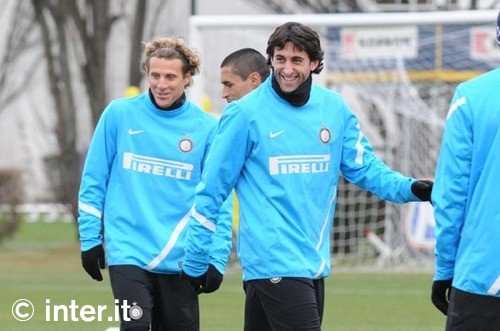 Just a little Forlan teaser, because you probably wont see him much tomorrow.

Today we learned what I have always suspected (and from his own mouth and everything)... Today, Claudio Ranieri said: "But I'm the opposite of Mourinho; if he did it then I can't do it!"

Ok, so there are four team who could knock us down (Napoli, Roma, Catania, and Genoa) and Palermo, who, if they win, would equal us in points. Napoli and Genoa play each other next. The only good outcome for Inter would be a draw. Catania play Parma, of course, we would prefer Parma win, but that may be a bridge to far for the poor Gialloblù. Roma has Bologna next and, similarly, we want Bologna for the win. As with Parma, though, I think it may be too big an ask. Draws all around would be just peachy for me. I am sure both Bologna and Parma would be thrilled with the point as well. So, all you Inter fans, take note and and root accordingly.

LETS JUST GET THIS YEAR OVER WITH ALREADY

Cause I am ready to move on. I want to put our bad start, Gasperini, and the endless injuries behind us. I still naive enough to hope that we will have a productive market this winter so I am actually looking forward to what the new year will bring. Let’s just finish right with three points so we can all have a happy holiday season.

Because it made me laugh and I can: