Share All sharing options for: Inter v Brescia: Will the Good Times Roll? 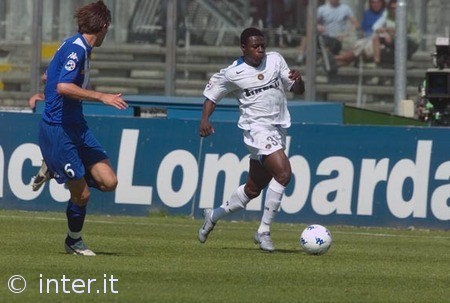 As we have already mentioned around here, Leo is enjoying a record-breaking run at the club. As new coach of Inter, Leo has earned 33 points in 13 Serie A games, breaking Fabio Capello's record. Now what we all want to know is whether or not the good times will keep on rolling with these next three fixtures. First, though is Brescia - a scrappy team fighting tooth and nail for salvation. Plus, this tie (if not this fixture) is crawling with history for Inter. In 1995, the day after Moratti bought the club, he and outgoing owner Ernesto Pellegrini took in Inter- Brescia at the san Siro. Ronaldo (the real one) made his Inter debute in an Inter-Brescia game in 1997. He made his comeback after injury in Brescia - Inter, 2001. Earlier in the year, it was the home fixture of this tie that saw Samuel injure himself. I tell you, it is a powerful fixture. And dont forget, Brescia is just a hop, skip, and a jump from Milan. This is almost a derby.

What: Brescia v Inter
Where: Stadio Mario Rigamonti, Brescia
When: FRIDAY! March 10, 8:45pm local time (11:45am pacific, 2:45pm eastern)
How to Watch: Live on Fox Soccer Channel and ESPN3.com, RAI, and ESPN UK; or find a stream (MyP2P, Rojadirecta, Ustream, and ATDHE.me)
Liveblog: Probably not. Kirby has school and MAD has a job and a family. I will be waiting for a plane in San Fransisco.

Brescia has spent much of their time as a club in the lower leagues and as such, they dont have much of a statistical record with Inter. Over the Brescia's 100 year existence (btw, happy centennial, Brescia), they have only played Inter 68 times in all competitions, 30 of which were Brescia home Serie A games. Usually, a team is expected to win at home. Not so for the poor Rondinelle, as out of that 30, they have only won 5 games. A further 13 were draws (any point is a good point) while the last 12 were Inter wins. Not that they didn't put up a good fight: the goals for Inter (37) and thiers (22) are quite close which leads me to believe many of the cagey and low scoring.

The last time Brescia won this tie was way back 2001, in the Baggio era - and even that only finished 0-1. More recently (back in 2005), Inter were the victors thanks to a double from Martins and an injury-time coffin nail from Vieri (assisted by Martins - sigh, good times, good times).

I couldn't find full highlights, but here are the goals, at least:

(are we feeling nostalgic yet?)

Brescia are not doing so well right now. With 25 points, they now reside in the dreaded relegation zone of the table. Considering they have strung two season in a row in the Serie A only three times since there was a Serie A, their position is not unexpected. Still, all is not lost. They sit at 19th with 25 points, and with a win on Friday and losses for Lecce and Cesena, they could conceivably haul themselves out of danger. Well, for the week, at least.

They have a pretty good defensive record - in comparison to Inter at least - with 35 goals allowed (Inter has a shocking 31). Recently they managed to hold both Udinese and Napoli to goalless draws so they clearly know a thing or two about defense. Offensively, they are a little slow, with only 22 goals (we have 54). That means, discounting poor Bari (they are truely an outlier now), Brescia has the worst offensive record in the league.

Their record against top table teams is pretty good. As I said, they managed to shut Napoli and Udinese out, they held us to a 1-all draw at the San Siro, and only lost to Napoli and Lazio by a 0-1 margin. Not bad. Overall, they have won 7 games (5 at home), drawn 7 (4 at home) and lost the other 14 (5 at home). Most of those wins came earlier in their season, though, as they have only won 2 in their last 5 (both at home). Although they may not have a whole lot of goals, they come from all over the roster. They have nine different goals scorers, with Cracciolo (7), Diamanti (5), and Eder (3) getting the bulk of them.

A quick scan through the rest of the squad shows a strange hodgepodge of almost wases and has beens like Cristiano Zanetti, Davide Lanzafame, Jonathan Zebina, and one of my most disliked players, Davide Baiocco. Too bad Adriano has gone back to Brazil because he would fit right in.

Giuseppe Iachini has called up:

Accardi is suspended while Dallamano, Zanetti, and Filippini are injured. 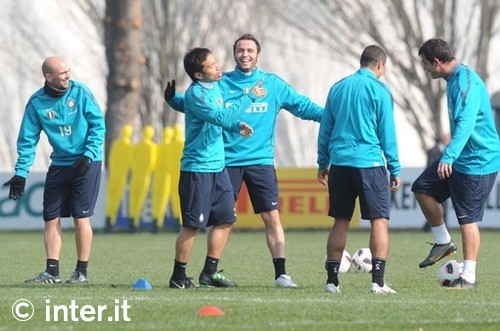 Let's hope these high spirits man lots of goals and an Inter win!

Leo has called up:

Cambiasso, Milito, and Samuel are still injured - although from the photos, Cambiasso looks to be almost ready. Chivu picked up a knock in training so is sitting this game out, while Thiago Motta is a "little fatigued." Anyway, that leave the midfield a little skimpy - I hope Leo knows what he's doing. You will notice a certain Simone Dell'Agnello on the list, he is a primavera player straight from their win at the Torneo di Viareggio. He was co-capocannoniere (7 goals) and was awarded best player of tournament. I think he most certainly deserves a first team call-up. 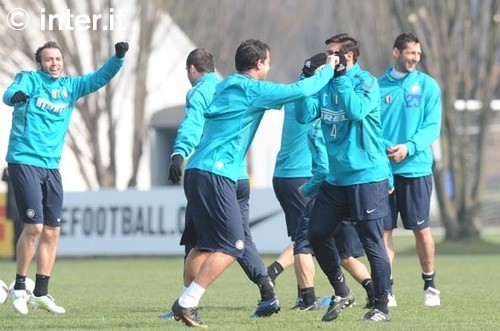 Ok, so were does this leave us in terms line-ups... Who knows. Leo is sort of known for switching things up a bit. Frankly, I just dont know what he will pull out of his hat next. In some ways, this is good - it keeps the other guys guessing and our guys fresh. In others, it is darned confusing - for me and the players. Anyway, I say, take your best guess in the comments because I have no idea even what formation he is going to pull out of his impeccably cut D&G suit pocket.

I am sure that even with the pressures of a super important Champions League game right around the corner, the players will be focused on this game. Everyone knows that if Inter want domestic silverware, they must keep the pressure as high as possible. We must win and hope that they stumble along the way. Never an easy task - just ask all the Inter chasers over the previous 5 years. 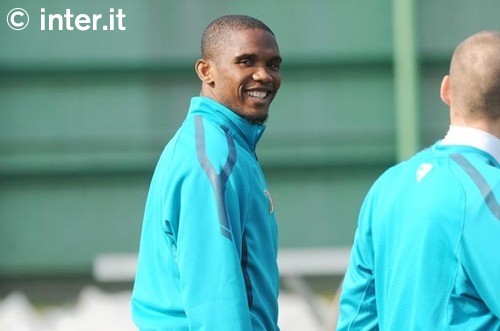 Happy 30th Eto'o. Many happy returns and thanks for those 30 goals -how about a couple more next week in Munich!

On a personal note, this will be my last preview for a month or so. We are off on vacation to Europe and wont be back until April. I hope to send off a dispatch from the road or two, but I cant be sure I will actually get around to it. MAD and Kirby will take over in my absence.

Whoops, I forgot to talk about Leo's presser. Sorry.