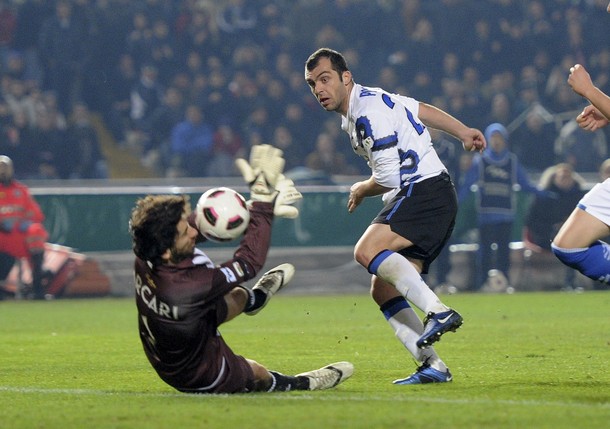 It was that kind of day at the office.

If you don’t take your chances than you pay the price.

When you play hyper-attacking football this is the mantra that you live and die with. Unlike other leagues, when you don't take the opportunities as they arrive, in Italy, even the worst team is organized well enough to make you sweat. We had several chances. I am not talking about the 30 meter hopefuls that our opponents attempted on a regular basis to claim that they attacked some, when really what we saw was the dreaded 9-1 formation/counter all game long. I mean we worked the ball into the box a dozen times and then missed our chances. We hit the bar. We hit the lucky goalkeeper in the face when he was in no mans land and we had him dead to rights. Games like this happen when it’s not your season.

And we got hit on the counter several times because we committed the midfield and the fullbacks to an all out attack. Cordoba got his red because after a 15+ season career he still lost track of a lone quick striker and we paid the price there too. We still have trouble defending corners – after Lucio was subbed off with a muscle problem that will keep him out of the Champions League game. We scored off a corner, though, which is progress of a sort. But we should not be drawing to teams like Brescia. Should. Not.

Cesar: Played very well and was unlucky not to get a clean sheet considering that the corner that sealed our fate was won by our defender, just headed in the wrong direction. 8.0

Maicon: Attacked well yesterday but I rarely saw him make the trip back. Come to think of it, all the close calls we had in the back he was absent for, wasn’t he? 5.5

Ranocchia: Froggy played his butt off yesterday and he definitely was one of the few who really looked good and was trying. It was his header that provided Eto’o the score. 7.0

Lucio: Until he was subbed off I thought that we had a really good chance to make it to the end of the game with a win. When he came off and Cordoba came on… 6.5

Nagatomo: Several folks at the LiveBlog thought that Naga had a bad game, but I don’t see it. I thought that considering the circumstances, he played very decent, well even at times. Better than Chivu has in several dozen instances at the position. 7.0

Zanetti: Decent if lackluster game. He made a few runs forward to put pressure on the opponent which is always helpful, but wasn’t super effective as a midfield tackler. 5.5

Deki: There were several incidents in which I thought Deki was lacking something. He had a nice moment when he raced back to defend Eder’s breakaway, but that’s really it. 5.0

Pandev: People will moan about Pandev missing chances, but it was Pandev who worked hard to put himself in position for many chances to exist at all. He also forced Zebina to put in the tackle of his life (I know, I know, Zebina – at least one pundit called it a penalty, I thought it was a good tackle) and could have drawn what I thought was a penalty when he was thrown down in the box in the second half. Oh well, fans will be fickle. 6.5

Sneijder: Wes did well with his free kicks I thought; even though they didn’t score at least one had to be saved for a corner. He hit the post once and passed okay. Nothing incredible though. 6.0

Pazzini: I thought Pazzini worked hard and had a couple of nice moments where he won the ball around midfield and he pressured well. He had one terrible shot and he had trouble with his first touch yesterday but he did put pressure on Brescia’s backline by always trying, especially in the first half. Pity he didn’t come close to taking a real hard striker’s shot, though. 5.5

Eto’o: He got the goal and did a lot of work between the halfway line and the opponent’s penalty area. I would love to see him more forward and more central, especially when Pazzini was subbed. I understand why he was back so far – he’s a better defender/midfielder than Pandev is – but I thought it would have been better for us if he shoots more. 6.5

People who have followed or play sports for a while know that the time for any team to take a dip in form is just after a huge success. It’s a trans-sport kind of phenomenon. It’s always a big deal when a team wins Back to Back titles or a Threepeat because it happens so rarely. A lot of things have to align themselves just right for a team to win championships and Inter –by extension us too - have been luckier than most in recent history. We had the blessing to be a deep team full of very determined, talented and hardworking individuals for a long time. 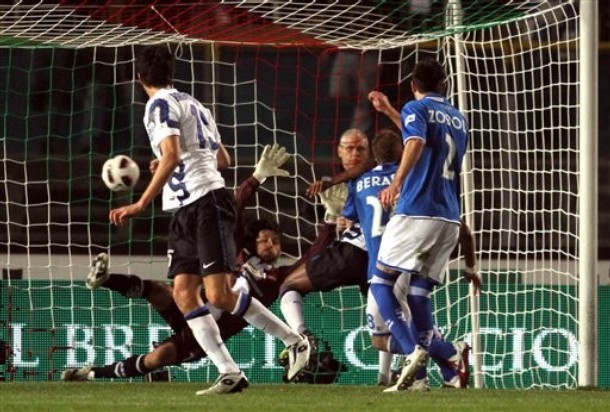 And that hasn’t changed this season. But the luck part has. We had injuries, we had what can generously be considered as a bad coach in Benitez and we had bad luck. Yesterday in Brescia we saw 2.5 of those three things not go in our favor.

The team is a little older now than it was when we started this championship run and it’s possible that this project, this collection of players that have been so good and so loyal, has seen its last days. I am talking about Deki, Cordoba and Materazzi, who in my opinion were not up to scratch against Brescia. Realize that I am not blaming them for anything; I said that this was a team loss in the comments to the LiveBlog and I meant it. I think that we are a much better team than Brescia – better than Matrix, Cordoba and Deki (and Pandev, I’ll get to him in a moment) could ever drag us down by themselves.

But I think that it’s important that we don’t lose the context of this game which is only 1 out of 38. Leo’s record right now is 11-1-2 and his locker room presence might be the only thing that saved our season. Benitez was 6-5-3 in his first fourteen games. If there’s someone you want to blame for the situation that we are in right now, I suggest that we look elsewhere than at Pandev and Leo. You might want to blame Benitez, the front office that saddled us with him and the lack of force in the close season mercato. From where I am sitting, Leo has been right more often than he’s been wrong so far, and that’s really all that we can ask. If we are honest with ourselves, while Inter didn't play great, it was a flukey, wayward header that made the draw. It wasn't like Leo got everything wrong here.

As far as Pandev goes, I think it’s about time that the hate stops. He’s a very decent player who was never advertised as the next Maradonna. The guy, like everyone else on this team has been injured and has sacrificed his body to play. It’s only been the past 3 games or so is the first time he’s been really in shape. And he made and took a lot of chances yesterday, they just didn’t go in. Pazzini had a beautiful ball given to him from Pandev. Pandev’s movement and willingness to work in the attacking end helped to spring him 2 or 3 times against the defense but he just didn’t finish. Is that what we hate him for? Working hard with a bit of bad luck at the end? If we had this Pandev at the beginning of the season… well, a lot of things would have been different if we had made the changes in August that we actually made in January.

So where do we go from here? I have been laying the ground work all season to temper expectations about this season and it’s obvious that I have been a failure. So I’ll go back to my tired refrain that no one wants to hear, but will nevertheless be extremely pertinent: we have messed up our season back in October and November by losing to Chievo, drawing Lecce, drawing Sampdoria at home, drawing Juventus at home and drawing Brescia at home. People think that I am joking when I quote MAD’s Guide to Winning the Scudetto © ® ™ (patent pending). I am not. You beat the lower half of the table teams every game if you can. You don’t draw to them at home, certainly. We are still at Milan’s mercy and we need them to stumble a lot to have a chance… stumble a lot more than I think they will.

People think that I display a lack of faith or that I am humble or something. What I really am is aware and not blinded by fanaticism of which teams need to be beaten if one wants to win the championship. I love to watch this team win as much as possible. I love to watch Javier raise trophies so often he’s ripping shirts from the exercise like an 80s wrestler. But I don’t think that we have it this season. Could I be wrong? Yep. Do I hope I am wrong? Yep. Does it seem likely from where I am sitting? Nope.

Yes, I have a player of the game. Don’t think that I didn’t play with the notion of putting Pandev in here just to rattle a few cages. The man had a good, if incomplete game and he obviously worked his ass off, unlike several of his colleagues. 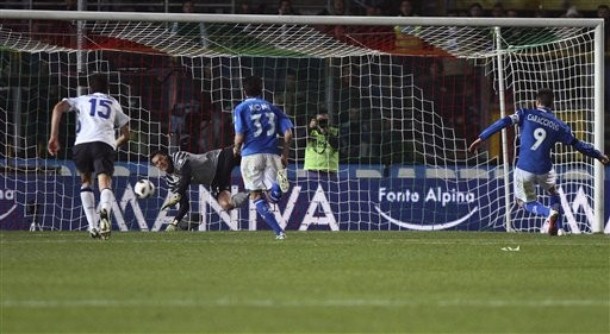 But when you save a penalty to preserve one measly point against relegation bound Brescia for your comrades who probably don’t deserve it, you get My Inter Player Of the Game. Cesar is a beast of several different proportions and his greatness is nicely contrasted by what has been happening in Torino recently. Inter have several very good, young goalkeepers on the books right now: Viviano, Belec and Bardi. None of them are able to take the job from the likable, Treble Winning, spectacular 31 year old #1 yet. Long may he reign. 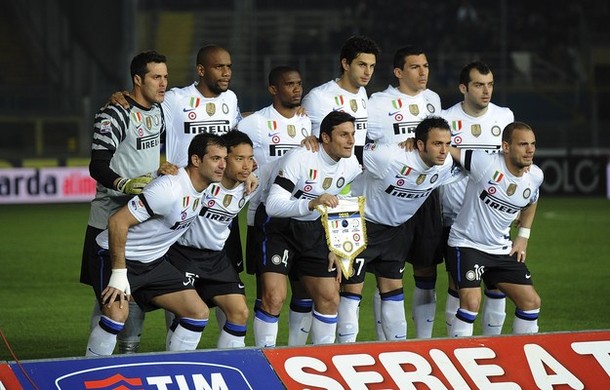