Share All sharing options for: Bayern v Inter: Round 2 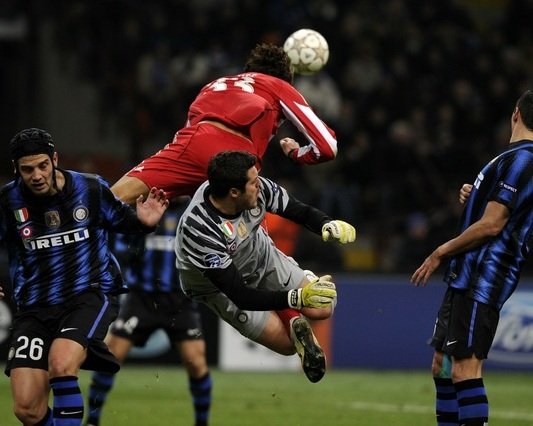 Hey guys! As you all probably know, Johonna has gone on holiday to Europe. She says it’s for a well needed vacation, but I believe she’s actually gone to stalk Julione. I guess we’ll see if I was right when she starts to post pics from her trip on The Offside. As a result of her trip, she will not have the time to post previews as she usually does before a game. I’ve been asked to step in and take the reins in her stead until she returns. So… here I am.

What: Fußball-Club Bayern München vs FC Internazionale Milano
Where: Allianz Arena, Germany
When: 8:45 p.m. (local time)
How to Watch: Looks like we’ve been shafted for ManUre v OM game on FSC. If you could show some self-control there’s a delayed broadcast at 6:00 pm Eastern Time. If not check the usual places for a stream (MyP2P, Rojadirecta, Ustream, and ATDHE.me).
Liveblog: Check back here 15 minutes before game time! I’ll have the Blog up and running then.

Last time these 2 sides met in Germany was all the way back in 2006. That game ended 1-1 with goals coming from Roy Makaay and the dreaded Patrick Vieira. That doesn’t give us any real indication as to how this game will go. It’s just a nice fun fact for ya. League form isn’t something to go by either. This game is going to come down to which team wants it more on the day. One thing I did notice is that the last time we played them and were considered the away team, we came out 0-2 winners. Let’s hope something similar happens…

THEM
I’m not even going to pretend I know anything about Bayern Munich and/or German football. All I know about them is that they have some star footballers in their teams and they’re underperforming in the league. I read an article where Bastian Schweinsteiger stated that he and his team aren’t underestimating us and they’re still out for blood after last season’s final. Well if that’s true we’re in for quite a treat as it seems that both sides are up for it.

US
Leonardo has called up everyone who isn’t on crutches for this one. This includes the cup tied Pazzini and the somewhat injured Milito. Depending on where you get your news, Diego may be making a surprise appearance, albeit, on the bench. But a Milito in the bench is better than one in the stands right? Also, we’re being made to sweat on the fitness of Lucio. Leorando says that he will have a fitness assessment before the game tomorrow (It just never easy with our backline is it). If Lucio doesn’t make it I hope to God that Leonardo partners the Frog with Chivu in the middle. My heart wouldn’t survive 5 minutes if Matrix or Cordoba were to see that field tomorrow.

From what I gather, the entire camp is up for this. From Moratti to Leonardo, Eto’o to Sneijder, Pandev to his Effect, everyone believes that we’re going to be able to turn this one around. Wes summed it all up perfectly in his interview:

"We are a team and we always play as a team. We don't depend on anyone in particular. We're confident because we played well in the first leg. It will be difficult but we're confident. We've got to score. They are ahead but you can't talk about chances of qualifying in terms of percentages. We just have to score and win. And we believe we will." 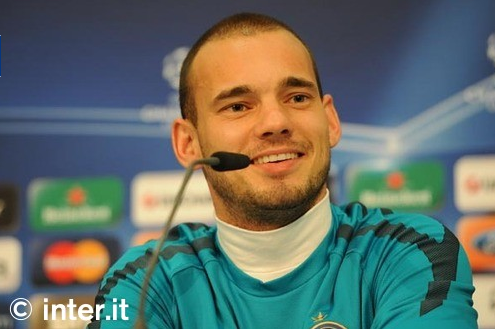 And hell, with a smile like that we can’t lose…

(Sorry about the lenght of the post guys, but if I’m to host the live blog tomorrow I have to get my project work done now.)