Bayern 2 - Pazza Inter 3; Still in Three Competitions Thanks to the Pandev Effect

Share All sharing options for: Bayern 2 - Pazza Inter 3; Still in Three Competitions Thanks to the Pandev Effect 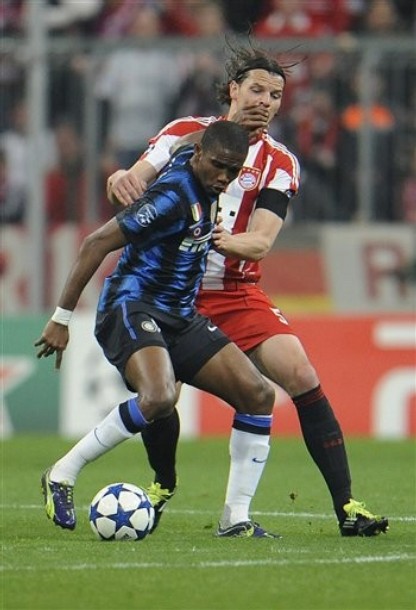 I am still at a bit of a loss, and I think that’s really saying something considering I am a crotchety, Champions League non-romantic pragmatist.

Can I say that when I settled down to watch the game on Wednesday, I thought to my self, I don't think one goal is gonna do it. We haven't done well holding onto leads. That was hardly prophetic, but it still scared me a little when we scored so early.

I am very nearly breaking my own 24 hour rule. But then again, this game might have been an early candidate for game of the year 2011.

So what more can possibly be said about a game that was infused with so much emotion? Speaking of which, can I say that there are lots of ways players on clubs show emotion. Some players throw temper tantrums. Some players get pouty. On Wednesday, our Inter showed their emotion by the way they came out to the second half. With only their pride they just wrestled and seized the game from the grip of the Germans. Looking back at the LiveBlog – excellently hosted by Kirby – it was obvious to all of us that the second half had a much different tone than the first – thank goodness.

Even though I think that words pale at the emotion of this game there were some interesting numbers involved with a most excellent game:

1. There have been 4 teams to turn a home deficit into advancement into the next round in the history of the European Cup/Champions League. Milan in the 50s, Nottingham Forest in the 70s, Ajax in the 90s and now Inter in the new Millennium.

2. It’s curious to look at the 3 Italian teams and realize that Inter were able to suffer the same problems as both Roma and Milan yet be the only Italian side to overcome those problems. Was that confusing? Here’s what I mean: Milan were completely unable to score against the Hotspurs and Roma completely panicked against Shakhtar.

Inter were held goalless against Bayern in the first leg but overcame that problem and exploded for 3 away goals. Likewise, Inter panicked in the first half, but pulled themselves together and regained control of the game in the second half.

3. Inter gifted Bayern every goal they had in the tie – Cesar x2 and Motta x1. Inter players were the last to touch the ball right before a Bayern player took the shot that went in. Kind of silly for Bayern players/coaches to contend that it was their mistakes that cost them the game, huh.

In the last Serie A game Inter played, didn’t we say something about taking advantage of opportunities? 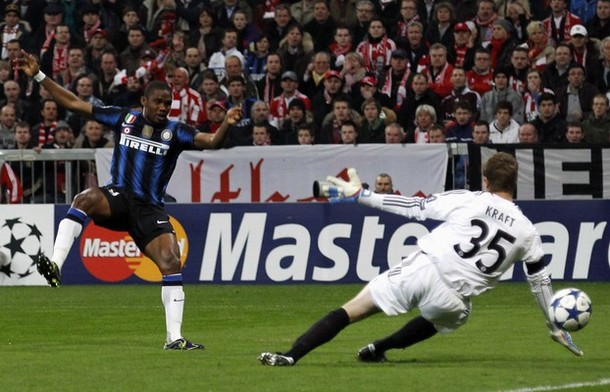 Cesar: One costly blunder, probably 3 goal saving saves… I’ll just have to take it, but this game could have been a lot easier on my heart if he just caught the damn thing clean. 5.5
Maicon: Attacked well both halves but really started to defend well the second. For most of this team, the 2nd half will be a salvation for their ratings. 6.5
Lucio: Ditto Maicon. He pushed forward in both halves, but he defended well in the 2nd. 6.5
Ranocchia: The 23 year old played well in both halves and saved our bacon with a goal line clearance. I think he almost had a goal off a corner, but I am not sure if it was him. 7.5
Chivu: This was the best game Chivu played against Robben. Nothing really bad came from the left. But he was inert attacking. 7.0
Motta: Gifted the 2nd goal to Bayern with a colossal screw up. He managed the midfield better in the 2nd. 5.5
Cambiasso: Another of the very few who played well in both halves. Team looked more at ease with him as Captain as well. 7.0
Deki: I have had a love/hate relationship with Deki over the years. Right now, I think that we need to put another player in his spot – permanently. 4.5
Sneijder: There wasn’t a whole lot of link up play in the 1st which limited his effectiveness. I thought he came close on the free kick and that he passed well most of the times. His goal was well taken and clinical. 7.5
Pandev: I thought Pandev played well all game, even after he lost battery life. He set up Eto’o and he scored – can’t ask a forward to do more than that, really, but he also cam back very well. It’s nice when a good player plays well again after a poor run of form. 8.0
Eto’o: When you have as much talent and determination as Eto’o has, it’s hard not to be the best player on the field – which he was. He didn't have much to work with, but when he got a hold of the ball something wonderful happened. One goal, two assists – the last showing him holding the ball… holding the ball… holding the ball… then BOOM making the perfect pass at the right time allowing Pandev to run onto the ball into the area, with the left foot and just thunder the ball into the roof of the night. 10.0 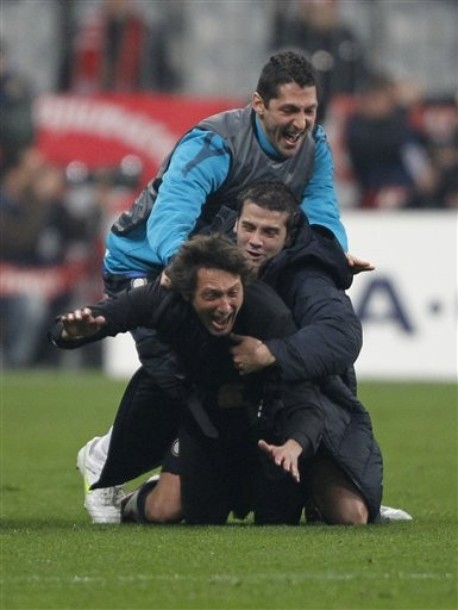 This never would have happened under Benitez...

There’s a lot to feel here and it’s hard to get it all out. So all I can do is just write and hope that the rest of you can get on my vibe, if not understand exactly what I mean.

Emotions coming in were mixed on my part. I thought we had the talent on the team to beat Bayern as handily as we did last May, but I didn’t know if we were as complete a team.

Scratch that, I knew we weren’t. We had as good an attack, even without Milito – gods, with Milito even at 70% we would be unstoppable it seems. But we were lagging a bit in the midfield these last few months. I know that everyone thinks that our defense has dimished sans Mourinho, and they are right – but they have the wrong syntax. It’s not the back four that are worse, it’s the midfield that screens them that has gotten less effective. 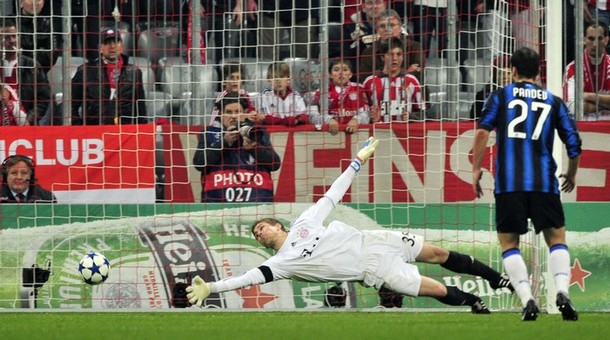 Here’s what I mean: Last season during our historic run, we had Zanetti, Cambiasso or Motta start as the 2 man screen to pick up the opponents midfield charge into our defensive third in the 4231. They didn’t make a lot of runs forward and Maicon and Chivu stayed home a lot more often during this time supporting the wings not becoming the wings. Think Maicon sitting outside the area in the Juve game when he unleashed that incredible goal last season. Now think Maicon going down to the end line last night.

The end result last May was that we defended all the time with 6. Last night we attacked with all the fullbacks – some better than others, but hey Chivu has other strengths, you know? – and all the midfielders except one.

The only way to stop Pandev on Wednesday night

This left us with one midfielder and two center backs to defend with once the break hit. In addition, consider that Bayern advance the ball primarily through their outside players where we had conveniently overcommitted… that just made it harder to defend. 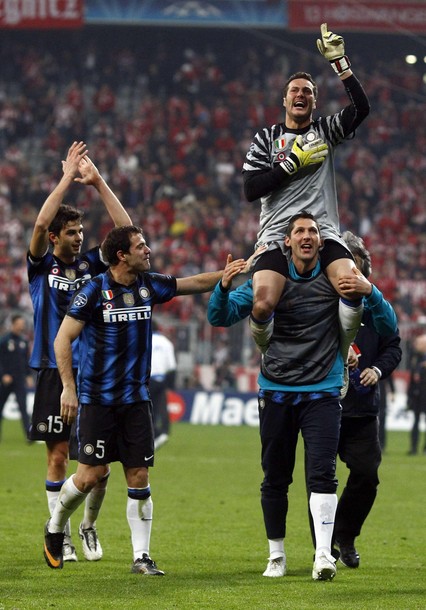 And that is partly why I had such fun suffering cardiac arrest after cardiac arrest during the first half. In the second half we made an important substitution which solved our over-committing problems and the midfield overrun problem at the same time…

Look familiar? We went back to the 4231 that kept the fullbacks and the midfield screen in place and we were able to do what we do best.

We are no good running backward. We are no good scrambling wide only to leave gaps in the middle. We are best when we are set, compact and ready to intercept the ball.

The tide, undecided after halftime, turned fully right about then. Tails confidently went up, lips pulled back from teeth and canines were bared in grim, vengeful joy.

Cue the theme music. It was time for the heroes to arrive in the nick of time.

When that substitution board went up, I thought, “Please, Calcio gods… Kharja for Deki… please…” followed swiftly with, “Aw crap!” and 5 new dents quickly followed into my desk. 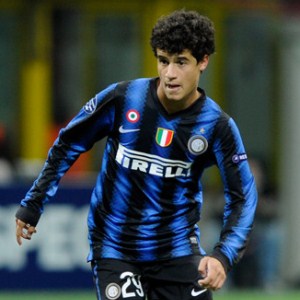 But the truth is that the kid played his heart out for the 40 minutes that he was out there for. It would have been easy for him to sulk about the lack of playing time he had in the last 2 months or so but all he did was his best and I thought that he did pretty damn good considering the situation and the pressure he must have been feeling. All those legendary vets staring at him as he walked on the field wondering how the hell this kid was going to overturn something that only 3 teams before last night have ever accomplished… it took a lot of guts and character. Good job kid. 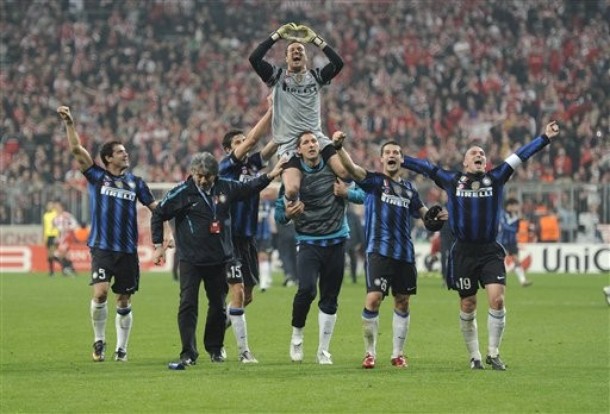