Inter v Lecce: Back To Business

Share All sharing options for: Inter v Lecce: Back To Business 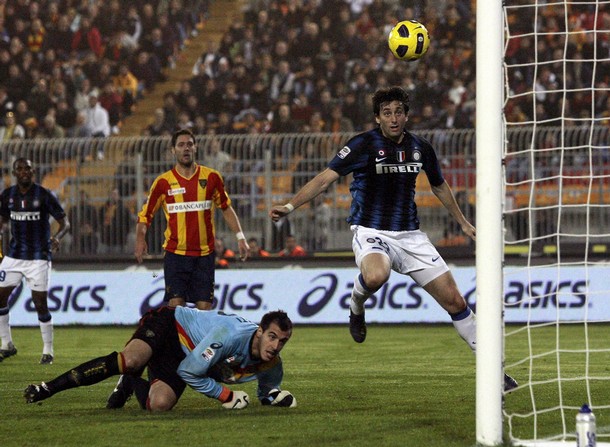 It’s that time again. Time to get back to business in Serie A. Time to forget about Schalke and Bayern. Time to come back down from cloud 9 and concentrate on the matter at hand.

We play Lecce this weekend and in a very important fixture that could go a long way in deciding where we stand at the end of the season. I can’t stress the importance of this game enough. Our cross city rivals are playing Palermo and we all know that they have the potential and talent to get a result, especially as Pastore and Co. are playing at their home ground. It’s imperative that that we go into this our game with the utmost focus as anything else could result in a Brescia incident or worse.

Update: Milan have lost to Palermo!!!

I couldn't find any highlights of last season's game, so I thought I'd put up a reminder as to what Lecce are capable of:

Lecce are one of those sides that are dangerous to face at this point in the season. They sit 17th in the league table and look Serie B bound. These sides are dangerous as they're battling for results to save their Serie A status. With that being said, they're coming to the San Siro missing their Top Scorer, Di Michelle, and Chevanton. With 2 of their main attacking threats out, one would think that they won't be too much of a threat. Don't let this draw you into a false sense of security as they have other capable players up front such as Jeda and Rubin Olivera, both of whom I’ve always rated.

From a statistical point of view, Lecce had a pretty rough season so far. Overall, They have 7 wins, 7 draws (1 of with came against us earlier this season), and 15 losses for the season, with a goal difference standing at -20. Ouch. Being more specific, their away form looks a little something like this: 2 wins, 3 draws, and 9 losses, with a goal difference of -18. Of the goals they score, most seem to come in the 2nd half of a game. On the flip side, the majority of goals that they concede come in the 2nd half of a game with the majority coming in the last 15 minutes.

I'm sure Lecce are coming to the San Siro with the mentality they have nothing to lose. I see no reason why they should think otherwise. They got a result off us already this season, what's stopping them from repeating that feat? 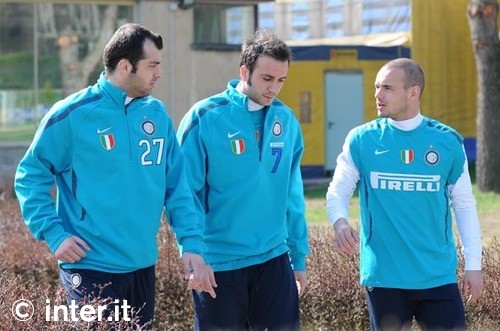 Leo has called up 20 players for tomorrow's game.

As you probably noticed, Andrea Ronacchia is not on the call up sheet. Don't panic as I did when you don’t see his name. He's fine. From what I gather, Leo wanted to give him and his knee a rest as they've been playing a lot of games with a slight injury. Also, there's no Milito sighting as yet. Stop pouting Maryam, he'll be back in 2 weeks according to Leo's presser. I'm quite fine with this as I wouldn't like to see him rushed back and re-injure himself for the 29364 time this season. David Suazo, our number 1 striker ever, is too a notable absentee from the call up list. How are we going to survive without Suazo?! *le sigh*

Your guess is as good as mine as to who is going to start in the CB position. Are we going to finally see Chivu in his natural position? Or are we going to be subject to the heart wrenching terror that is Materazzi or Cordoba? I hope to God that Leonardo uses his brain and inserts Chivu alongside Lucio or else we’re going to be in for a long, long game. Provided that Chivu slots over to the middle expect to see Pupi at LB. The 2 pivots should be T. Motts and Cuchu, whereas the rest you could probably guess. All my assumptions are based upon us using a 4-2-3-1.

One worrying piece of information is that Eto'o, Pazzini, Lucio and Nagatomo are all 1 booking away from missing out on the Derby next weekend. Given their importance - especially the first guy - and the importance of next weekend’s fixture, I wonder as to if the team selection will be a bit altered. I guess we’ll find out tomorrow.

"I think optimism breeds more optimism and victories breed more victories. Inter are aware of the fact they are in a decisive stage of the season. Lecce have been improving game after game and although they will be without Chevanton and Di Michele tomorrow that doesn't mean they will change their usual open game. We don't expect it to be an easy match at all."

Every time I hear this man speak, or I read what he says, I can’t help but like him more. We have a coach that knows what to say when to say it. In a sense, he’s a bit more romantic with his words that Mou’ was (guess that’s what you get when you mix joga bonito with italiano).

All-in-all, let’s just go out there and deal with this side swiftly and with minimal effort. We have the ability and required talent to do this. 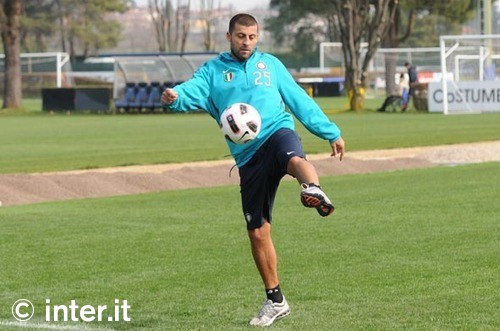