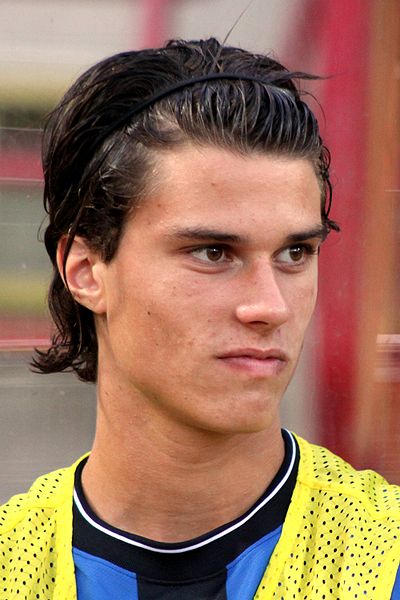 It's hard to get excited about an International break when there is so much other interesting stuff going on, like title races and Champions League stuff.

U21 boss Ciro Ferrara has noted that Lorenzo Crisetig is something special. Crisetig was born in 1993 – making him 18 – and has been called up to the U21 side a couple of times already, the first time under Casiraghi. Criseig has already shattered the age record for youngest U21 call up – formally held by Federico Macheda.

The midfielder/defender has impressed every one who has been his coach including Mourinho who called him up for a friendly or two as well as a Coppa game when the team was suffering an emergency injury epidemic.

Crisetig is one member of a large Inter contingent that was called up by Ferrara. The rest include: Goalkeeper Francesco Bardi and Defenders Faraoni, Donati, Caldirola and Biraghi. I had thought that Ferarra would carry on the doctrine of his long time mentor Marcelo Lippi. It's nice to see that someone can rise above the politics and follow good sense, Inter has a great youth set up and the U21 coach should take advantage of that. Or he's smart enough to know that his job hinges on him winning and he's willing to use any player from any club to help him do that.

By the way, Crisetig, Bardi, Faraoni and Biraghi were all part of the Viareggio Tournament winning side this winter.

The Romanian National team has reported that Chivu has a right thigh problem. No word on how bad the injury is, but he will not be taking place in any games this week.

FrogBoy’s knee injury has been reported as everything from debilitating and needing an invasive operation to just painful precaution. If we lose FrogBoy without Chivu or Samuel able to step in we are in a bit of trouble. Think long natural stream of excrement in a Native American conveyance with no physical means of propulsion.

Speaking of The Wall (or Wallee if you prefer), he says that he wants to come back before the season is over. He better hurry then, there are only 8 games left. Another way of looking at this is that Walter Samuel wants to be back soon.

Milito is rumored to be ready to make the bench for the Derby. If he can be close to what he was, we could use another quality forward. Eto’o’s being run a little ragged.

It is really early to be looking at the summer transfer “news” but International Breaks put me into a coma. Wake me when the tournaments actually start.

Inter is rumored to revolutionize the midfield during the summer, but in truth there is only so much that can be done. Our midfield is only 8 players deep and I can’t see too many departures. For those who have short memories our midfield is thus: Sneijder, Cambiasso, Motta, Kharja, Stankovic, Coutinho, Mariga and Obi.

Mariga, sadly, is already linked to Aston Villa – although a quick look at the EPL table shows that Villa isn’t exactly safe from relegation and if they get relegated they will be selling not buying. I have always liked Mariga’s range, power and his athleticism. I can’t deny that he lacks a bit of technical skill –like passing, first touch and dribbling - and polish. But I maintain that used correctly he’s an excellent late game sub and he’s relatively cheap. However, if Villa can use him full time, then you can’t argue with that. He was never going to be more than a bit player here.

Obi will be going out on loan, if not sold/part of another deal. Obi has less playing time than Mariga so I think it’s safe to say that he’s gone. Although, like Mariga, I can’t ever think of a time that he’s come on and stunk up the joint. Just the opposite, I think that Obi has done well in extremely limited time.

Deki might be retiring or might be considered a valuable reserve. It’s impossible to rely on Motta, who has only been a regular in the squad after January missing the whole Benitez regime. Cambiasso has had exactly one season on this team injury free.

And we already know that Muntari has everything but the money changing hands for his transfer.

This leaves us with Sneijder, Kharja and Coutinho as reliable midfielders although in retrospect, I think that Sneijder has also spent some time on the training table. So, I wouldn’t be surprised to see 3 or 4 midfielders join up from the ranks, as Inter does every season to accommodate UEFA regulations, and/or bought.

It’s way too early to talk about possible names that are linked to Inter by even the most tenuous of connections. But, here’s what I am doing: I ask myself if the player linked to us is consistent with the hiring practices of Marco Branca these last 5 seasons or so. In other words: Is the player young – under 30? Is the player relatively cheap/a bargain? Has the player shown that he can play in multiple positions well? With notable exception these seem to be the criteria of Branca. There have been exceptions, of course.

And Now For Something Distressingly the Same

From the world of ridiculousness, the word came down from on high that Uncle Silvio had Ibra’s sentence of a 3 match ban reduced by one game. Just to make sure that everything looked above board everyone had a one match reduction today. Do they all deserve it? Who cares, right!

Next time I get a three match ban, I hope to high heaven that it happens at the same time someone from Milan get their appeal.

And not, for example, at the same time Eto’o got his…

You know, when I saw the Ibra incident I was skeptical that The Powers That Be would do the right thing and ban him for as long as Eto’o was banned for the exact same incident. He received an initial three match ban and I bet that there were people around who thought that I was just playing the “it’s us against the world” card. That I was wrong and out of line.