Share All sharing options for: Our Story Thus Far… 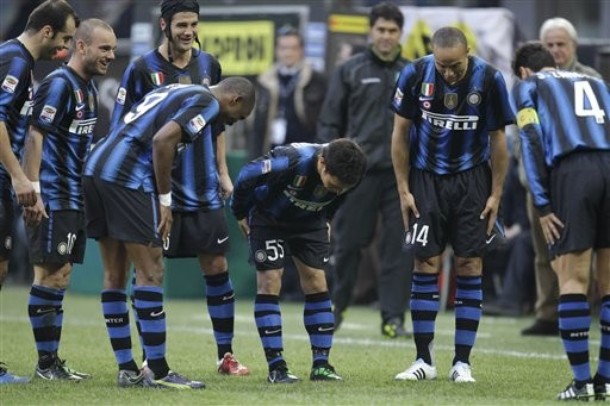 Picture of the year 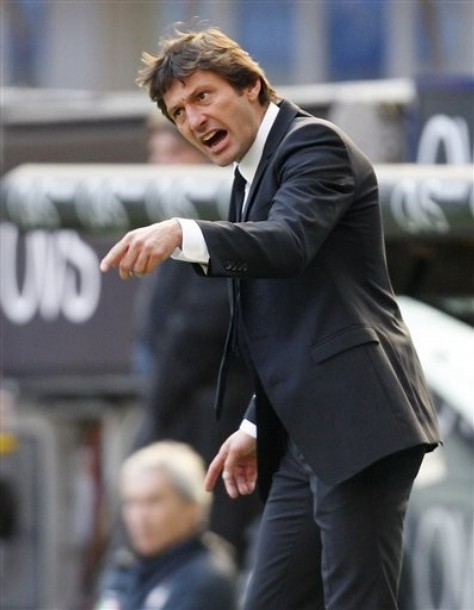 Starting from an incredible 13 points back from the table leaders when the season restarted in January, Inter began 2011 in 7th place. Losing just 2 games in the ensuing 13 games and drawing only once, Inter went on to win 10 and climb 5 spaces on the table until we arrive to the present and sit at second.

A large share of credit for the turnaround has to go to Eto’o for keeping us afloat during the Benitez debacle and then being our leading scorer in the resurgence under Leonardo.

Another very large share of credit needs to laid at the feet of Andrea Ranocchia for being a steadying force in the defence that allows us to safely partner Lucio with someone other than Materazzi or Cordoba.

Leonardo can get a great deal of kudos from me just for not being Benitez. However, it seems that Leo is smart enough to figure out the 2 formations that work best for us and when to use them. Plus, it seems that Leo has been largely responsible for turning around the dressing room as well as the on the field product.

Other improvements to form can go to Maicon, who since January has started to look like defender-like again. Also, Thiago Motta who lost almost the entire first half of the season to injury only to come back in the second half of the season and become a key component to several games in 2011. Pandev and Sneijder have recently been able to show flashes of their 2009-2010 form this half season by making nice passes and showing much more enthusiasm. Lastly, Kharja has proven that he can be something of a utility man in the midfield as well as the occasional spark through his hard work.

I really hope that I can do another one of these in May and say that Milito proved to the world that 2010 wasn’t a fluke by his incredible play in these last 8 games of the Championship.

Briefly, I hope, our season looked somewhat promising in August through September where we went 3-1-1 with a loss to Roma. A little shaky but undefeated in October as we went 2-1-0. November into December was disastrous as we stumbled to 1-2-3 including losing to Chievo, Milan and Lazio. January saw the beginning of normalcy with 5-0-1. February looked equally normal with the same 5-0-1 record. March could have been perfect if not for Cordoba doing his best 2010 Muntari impersonation with a record of 2-1-0.

Our last eight games in Serie A look like this: Milan (A), Chievo (H), Parma (A), Lazio (H), Cesena (H), Fiorentina (H), Napoli (A), Catania (H). Not an easy schedule at all, however all but three are home, where I think/hope we play better. Napoli away is, I think, the game that everyone has dog-eared as The Big One after the Derby, but the simple fact is that they are all pretty hard. We will need a lot of luck and all our healthy players to pull this off. 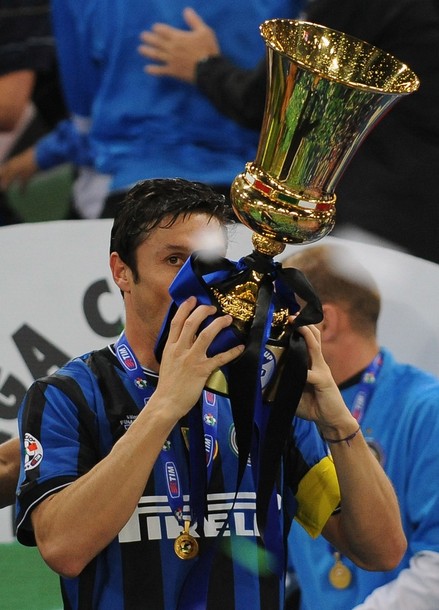 Lucky for us we didn’t have to start playing games in the Coppa Italia until after January. We beat Genoa 3-2 and we advanced after drawing away with Napoli by penalty (4-5). We have a 2 legged tie against “good Coppa friends” Roma coming up and the general feeling I get from reading and watching interviews is that the team doesn’t want to sacrifice the “lesser” cup for the other two.

I can’t speak for the Roma contingent but it seems that they are in something of an important race themselves for 4th place. Would Roma consider resting players for the Coppa to make 4th place?

I wouldn’t think so. Like us, Roma might be trying to get a cup to show something tangible for what might be considered a disappointing season for them. Also, I think that it would set the right tone for their new owners – assuming they get new owners; I am not going to be convinced until the papers are signed - next season. So, long story short, I think that both clubs will field the best players each have available.

Either way, it’s going to be a fight. By the way, thinking out loud, is Totti still suspended for these games? I thought it was for 4 Coppa games but I don’t know how many they have played. Any insight would be appreciated. 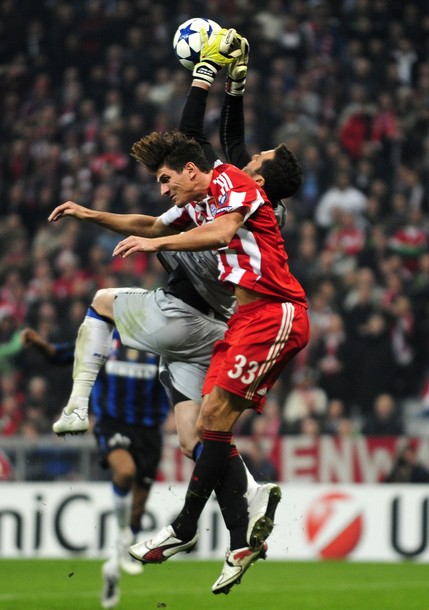 Starting from the beginning, we finished 2nd in our group having won 3 games, draw 1 and lose 2 – the last loss going to Werder Bremen in what I can only describe as an embarrassment for the team and abject failure on all fronts from the coach. I will never forget how angry that game made me. Benitez’s failed to proscribe a goal for the game beforehand, a plan to achieve that goal in training leading up to the game and any sort of adjustment in game to preserve those goals.

I can accept losing. I can’t accept being beaten. There is a difference.

Moving on to happier days… we fought hard against Bayern Munich at home in late February, but fought back in glorious fashion against Bayern in mid March sending the Germans home to pick up the pieces of their own disappointing season.

April 5th and 13th will see us play a German team for the third time in 3 separate stages of the Champions League. Our guys can’t say that the surroundings will be unfamiliar anyway.

Shalke, for some background information is currently 10th in the Bundesliga. They have enjoyed a very good recent run, finishing in the top 4 spots 5 out of the last 6 seasons. Near as I can figure out, Shalke have won the German domestic league title 7 times, the most recent being in 1958. Disgustingly – for us, not them - they own their own stadium, which gets high marks for modernity and multiple usage, by the way, and regularly sell out the 60,000+ capacity.

After qualifying directly to the group stage the previous year, they won their group (Shalke, OL, Benfica, Tel-Aviv) with a 4-1-1 record. They played Valencia in the Round of 16. They draw away 1-1 and they won at home 3-1.

We play at home first and away the second leg.

Numbers are from Wikipedia, so if they are wrong, oh well.

The final number is a total of the rankings and every year one number comes off the left side and a new one comes on the right. As we can see, Italy routinely has the worst number; even last season’s winning CL effort isn’t good enough to be better than any of the 3 teams above Italy for the same season.

Next season, Germany will lose their worst number to be considered for the co-efficient and Spain will lose their best. It’ll be interesting to see how that affects the rankings next season if at all. I don’t think that English teams did very well in the Europa League this season, but it certainly pays to have 3 out of the 6 teams in the quarterfinals of any European tournament.

Here’s the part that I never get. Why teams fight so hard to make it into a European competition spot and then treat it like a nuisance. Even if the money isn’t great for winning the prize – it should be worth it to market the hell out of it and try to make a decent gate. Give a free gift. Cut prices in half. Do something innovative for pity’s sake.

I for one have no idealized notions of the Champions League but I realize how important it is economically. Plus, when teams like Milan, Roma and Juventus were in the Europa Cup… I’ll overlook the fact that these 3 teams are much better/more expensive than their competition… didn’t they think that they might one day need to use that 4th spot? I mean, any one of those 3 teams should have been able to go deep into the tournament, don’t you think? Even if the money then wasn’t worth the effort, how about playing to save that 4th spot for a time when you might need it, especially considering how financially devastating is to not make that CL money? That lack of practical foresight is almost an allegory for the way that many Serie A teams have been run in the past. I certainly hope that we have learned from ours and their mistakes. 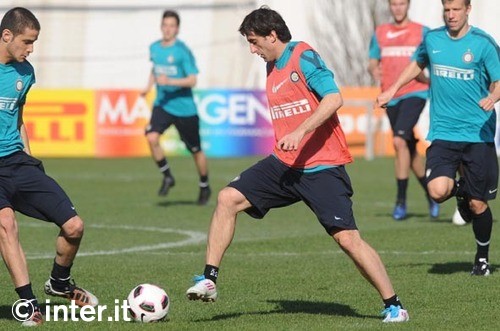