The New Kid In Town

Share All sharing options for: The New Kid In Town

Since the team finally has a week between games, things have slowed down a bit on the Offside as well. I know that this has been brought up in the comment section, but I thought I would officially do a little something on the newest Inter player, Luc Castaignos. While he will stay with Feyenoord until the end of the season, he has signed a 5 year deal with Inter that will see him in nerazzuro until 2016. It's just that technically, it doesn't start until June. We can hardly wait!

Besides having a difficult name to spell, Castaignos has been turning the heads of football scouts for two years (and he is only 18!). He featured prominently in the last U-17 Euros with the Dutch National Team, finishing joint top scorer in that tournament. UEFA named him as one of 10 future stars from the competition saying: "His height, his pace, his strength and finishing ability marked him out as an outstanding striker." More recently, the Spanish magazine, Don Balon, named him to their "Top 100 Young Players for 2010," while FIFA placed him on their "Players to Watch In 2011" list. So ya, the football world has a major boy crush on this kid. 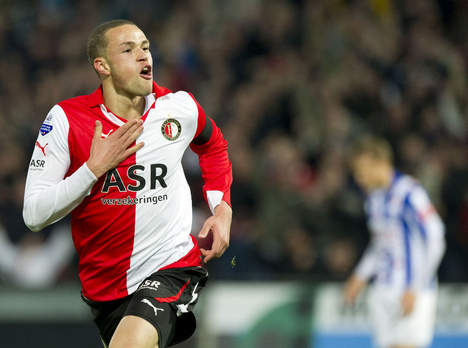 After much speculation, Inter and Luc finally make it official

La Gazzetta compares him to Titi Heny, saying: "he has the physique of a Number 9, the dynamism of a second striker." When asked to describe himself, Luc says he feels more of a sporting kinship to Eto'o: "Maybe like Eto'o, my idol and the best in the world. Because like Eto'o, I like to see the goal but I can also move along the wings. I am fast, I know how to score but also how to play for the team, to make assists. [I rate my] right an 8, my left a 5.5, and my head, lets say a 6 plus."

All of this has made him a hot prospect over the years. Teams like Arsenal and Manchester United were reportedly interested but Luc went the right way and chose Inter, saying: "[I chose Inter] because it is the greats club in the wold, with fantastic players where every boy would want to play." Awwww. So young and already a charmer. Of course, it certainly helps that he fell in love with football by watching a certain now-retired Ronaldo light the world ablaze with his incandescent talent in an Inter jersey. Ronaldo's legacy with Inter goes far beyond his contribution on the pitch, it seems. Towards the end of his interview, he really got the feel-good vibe going, saying "I am certain that [Inter] will win the championship, they are better than Milan. And they will do it also in Munich." Couldn't you just swoon? His parting words? "Beat Milan!" Really. He said that. Not making this up (how could I?).

Castaignos would like to have the shirt number 30. We will keep it warm for you until June.

And speaking of those fantastic players, Wesley Sneijder took time out to meet with Luc when he came La Pinetina for his physical. Castaignos was clearly star-struck, saying "When I walked into the Inter office for the first time on Monday, you know who was there? Wes, him, Wesley Sneijder, the idol of all the Dutch guys. He was there for me, waiting for me: crazy, I could hardly believe it." I mean, I could just about eat this kid with a spoon - that is how sweet he is.

As for personal stuff, he doesn't play video games, instead, he likes to read and watch movies (like Scarface), and above all, hang out with his family. His father, Jan Luc (French) and his mother, Silvestra (Republic of Cape Verde with an Italian passport), are both very proud of him and will be joining him there in Italy. He almost seems to good to be true - like an anti Balotelli or something. I just hope he turns out to be as good as everyone thinks he will be.

So, are we excited yet?

Obligatory best of video set to that "Remember the Name" song: