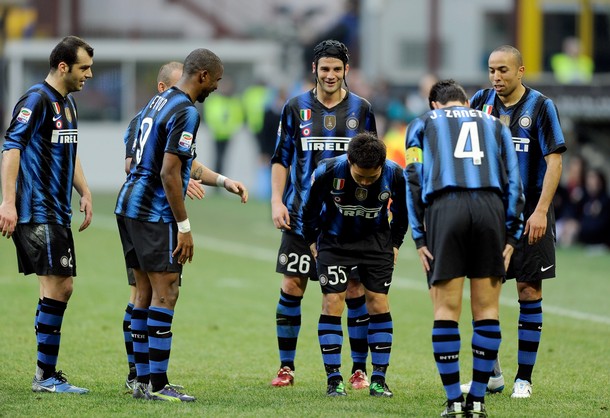 The Pandev Effect is simply this: It’s the change in the attacking output of Pandev, the observer perceives relative to the source of the offensive output. In this case, as Pandev played on the field we perceived much more offensive output than when Stankovic – the source of our attacking stinkyness – was trying to do the same. I think he also has to be moving towards you... or is it away from you?

Okay, we are officially in the last quarter of the season so let’s take a look at some stats before we discard them all as meaningless.

Since January 6th, Inter have played 13 Serie A games and have won 11 of them. For those new to our Crazy Shores, that means that Inter have made 33 out of 39 points. 33 out of 39 is a record for Leo as no coach has ever made as many points in that number of games. Fabio Cappello was the former record holder.

I count 3 games in that period that we had to come back from a deficit to win, including famously, 0-2 to Palermo. Depending on how you look at success this season, that could be the game that changed our fortunes.

I count 3 Serie A games in that period where Inter has scored 1 goal or less.

Not counting the Genoa game for which I have no numbers, all the Inter home games for Serie A games have drawn at least 45,000 people. We so need our own stadium. Can you imagine the revenue the team could take advantage of with a new stadium, a commercial presence in Japan and more good appearances in the Champions League?

Pazzo has scored a goal every 112 minutes with Inter - which puts him right at Milito's rate last season. Eto’o has 18 Serie A goals (half his total came under Leo) and 30 in 38 in all competitions, I think.

We jumped 6 places in the standings since Jan 6. We narrowed the gap with the league leaders from 13 points to 5.

Inter has the best attack in Serie A with 54 goals scores. Since 34 goals were scored under Leo, it’s pretty easy – and sad, really – to see how many goals Inter scored under Benitez for twice the time as coach.

Inter, in the last 13 games, have allowed 17 goals against and 31 goals against for the whole season so far, which is 28 games. This puts the team right in the middle of the pack for futility in defense.

All of these numbers are really interesting and I am one of the first to enjoy stats, but here’s the reality: If we don’t win the Derby, then we have no chance for the Scudetto – and even then we would have to catch a break. So we have to stay even until the Derby and then see what happens. Otherwise we probably have a lock at second.

Reality #2: If we don’t win the away leg in Munich then our domestic form isn’t going to mean much more than qualification and a good vibe for next season. We need to beat Munich to redeem some of the lost Champions League aura that we had at the beginning of this season and Benitez squandered in what was possibly the worst game I have ever seen Inter play. You know the one.

Interesting fact 1: Playing against Genoa in January for the Coppa Italia, Ranocchia incurred a penalty against. The Genoa penalty taker? Kharja, of course.

Interesting fact 2: That same Coppa Italia game is the last time I can remember Inter scoring off a corner – I think Motta scored from one earlier that month but I wouldn’t trust my memory on this one. The player that made the powerful strike? Mariga. Coincidence, I think not! 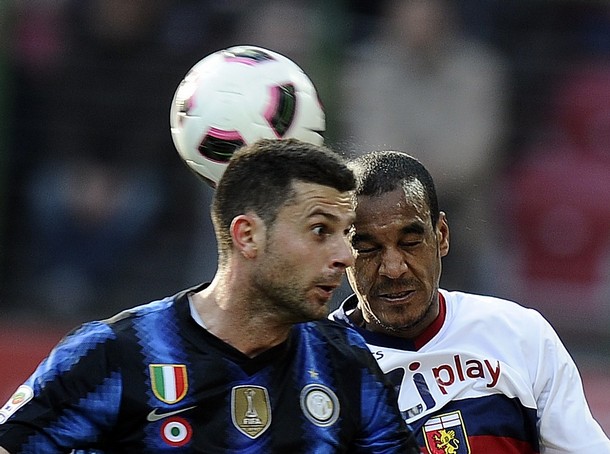 The Pagelle is taking a break from this game as the radical shift in team form from the first half to the second half would make a report useless. Only Eto’o would get a good grade for both halves. Besides, we won 5-2… how many players could we have that did poorly and still win 5-2? Answer: 1 Deki.

Watching the highlights to this game is guaranteed to make you smile. Kind of like the second and third Blackadder series.

Let’s forget the details of the first half for our purposes here other than to say that the team was decent and that Genoa scored against the run of play, really as Inter had several more dangerous maneuvers and were camped in the Genoa half for significant stretches of time.

Of our decent, if somehow uninspired crew, the least decent or inspired is Dejan Stankovic. He didn’t complete a whole lot of passes. He didn’t make a whole lot of defensive difference. He just wasn’t’ himself – even his trademark long shot sniping was off… waaaaaaay off.

Bringing in Pandev did a number of things – all good.
1. It used Pandev for only 45 minutes. Pandev came on and played like a demon… until he scored. If he was used from the beginning of the game I doubt that his battery would have lasted a full half.
2. It took Deki off the field. Deki has looked off and he needed to leave. I thought that Kharja would have been the ideal replacement. I guess Leo had a thought to go all out attack.
3. The formation switch to the 4231 was inspired. Genoa usually plays with 3 center backs. Looking at the highlights of our goals, I can see that we attacked the edges of the defense – where normally there would be fullbacks, but not in this case – and sent in controlled crosses to the feet of our forwards. Very astute.
4. I have been looking back at some highlights from January onward and the change in manner and mind set has just been incredible. And Pandev's form today is a factor in this. He starts to get on track and we can dust off the old 4231 and start attacking people even more than we are now...

Samurai is going to prove to be a beast of a left fullback; I have no doubt about it. He has the attitude and he has the speed. He can defend very well and he’s basically fearless throwing himself around back there. Give him some time with the group to work on understanding and work on his passing and I can see the lineup next season: Javier, Santon, Naga and Maicon outside and a rotation of Lucio, Samuel, Frog Boy and Chivu inside. Oh yeah, and his transfer is something ridiculous like 4 or 6 million € already agreed to.

Am I missing something? Ah yes, the sublime and smiley Mr. Eto’o. Last season I drooled over his ability and this season I have drooled some more… but the honest truth is that the man is a beautiful player and watching him is a joy to be able to witness smooth, graceful greatness. But it’s also sad because when he leaves this club there are so few players in history that are his caliber. He’s one of the all time great strikers – will he ever be remembered as such because he played with Messi and that other guy, the Orthodontist’s Nightmare? I don’t know, but I do know that I am in love with watching him play right now.

He had a hand in 4 of the 5 goals today and I believe that he made the Genoa keeper crap his pants on at least one more occasion. On the second goal he showed that for all his innate skill and superstar status he remembered one of the earliest fundamentals drilled into a boy: Follow the shot. On the third goal he engaged in a one man high line press, won the ball and then juked a man out of his boots only to embarrass the keeper near post. You know what it reminded me of? Oba-Oba doing Legro in and then putting the ball in Buffon’s 5 hole in a game against Juve about 10 years ago.

There was a Milito sighting during the game this morning... I can't wait until we get the old Milito back. He's an incredible, awe inspiring player and he deserves better than what he has right now. We deserve to watch him play too, with all that we have had to put up with this season. 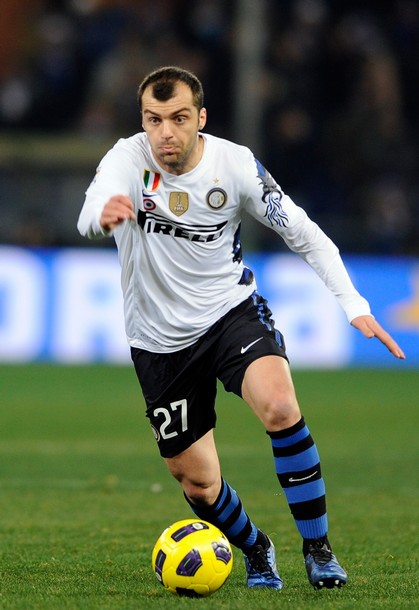 So, having drooled over Eto’o’s incredible ability and savvy in a man-crushy way… I am not picking him for this.

It has to be Pandev. Pandev was the game changer that made the space open up for everyone else. Besides, the subtitle of this little shindig is The Pandev Effect. Clearly he had one. This is what Pandev can do when he’s motivated, healthy and with confidence. He can dribble well, hold up the ball and pass well. The more we use Pandev in a way that takes advantage of his strengths the happier we’ll be. 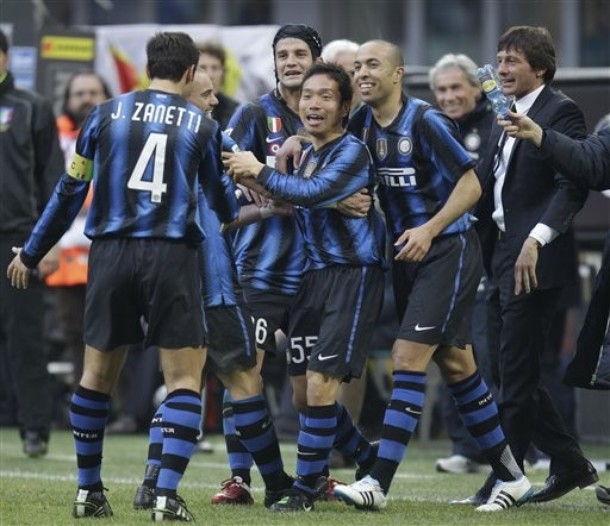