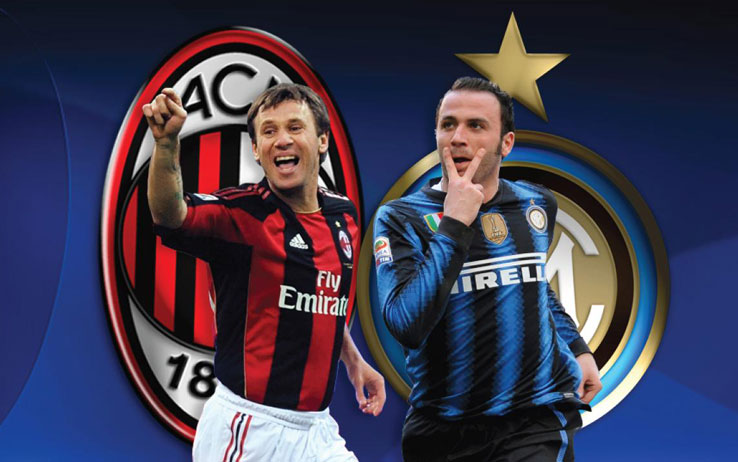 Well here it is. The be all, end all of derby games. I can’t remember the last time we had a derby of such importance (maybe the UCL match of 2003?). Don’t buy into what everyone’s saying. This game WILL decide the championship. I know, there's 7 games after this one and anything could happen, but take a second to think about everything that goes with victory or defeat…

What: Milan v Inter
Where: San Siro, Milan
When: 8:00 p.m. (local time)
How to Watch: FSC will be bringing the game Live at 2.30 eastern time. If you don’t have FSC check these sites for streams. (MyP2P, Rojadirecta, Ustream, ESPN3,and ATDHE.me).
Liveblog: We’ll be live 15 minutes before the game kicks off.

A win would put us at the top of the table. It would also give us a moral boost, momentum, and our destiny. Being back in first place would mean that we now control the league. But Kirby it’s only going to be one measly point? True, but it’s better to be the one being chased rather than the person doing the chasing. Having our destiny in our own hands will be a fantastic feeling. I can’t wait to taste the summit again, for I have missed it so…

A loss on the other hand would just spell disaster. We’d drop 5 point back yet again and Napoli would most likely overtake us and jump into second. If you couple those 2 things with the drop in moral the camp would face, we’d have a serious issue on our hands. There will be no coming back from that and this is why our only option is a win. Anything else wouldn’t be acceptable in my books. 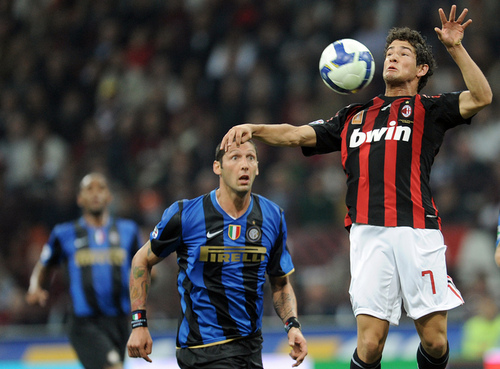 If you want to find out the latest happenings in and around the evil part of town, check out right here.

To say were in a bit of a pickle would be an understatement. In the last liveblog I remember saying that I thought it was a blessing in disguise that Lucio got a booking and had to miss this game. He was playing like rubbish and I thought that the pairing of Chivu and Ranocchia would be the best thing. Boy was I stupid to think that I ever get my wish of seeing those 2 playing in the center of our defense. Thank you FIFA for throwing in a very untimely international break into the mix.

As it stands we’re not entirely sure of the health status of Cris. He’s been called up so we’ll just have to wait and see what the starting 11 looks like come game time. I pray to God that he’s healthy as I wouldn’t like to see Matrix or the Nani Infused Cordoba on the pitch.

Provided that Cris plays, we should expect the backline to line up like this: Maicon, Ranocchia, Chivu, Zanetti. I rather have Javier at the back as this game may be a bit much for the inexperienced Nagatomo. Plus, Zanetti won’t be needed in midfield as Cuchu and T Motts seem to have their heads on their respective shoulders again. If push comes to shove and we’re getting mauled in the midfield we could always push Javier up and bring Tomo on. I don’t see us having to do that tomorrow, but hey, it’s nice to have options right? Lastly, if Deki sees starting birth tomorrow expect me to throw the mother of all tantrums in the liveblog… 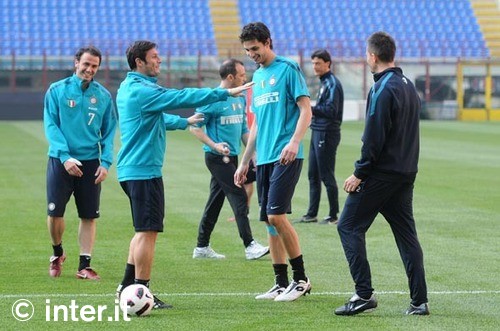 Smiles all around the camp

Up top we should see Pandev–Pazzo –Eto’o with Sneijder in the hole. Did you notice something a bit different with the call up today? Yes, it’s true. Your eyes aren’t playing tricks on you Maryam. Diego Alberto Milito is fit for the first time in God alone knows how long. Just seeing his name on the call up sheet makes me get goosebumps. This is one of the first times in a long time that that we’re going to have a proper attacking option on the bench. Who else would you want to call on if we get ourselves in a spot of bother? I could think of no one else but El Principe!!!

In the end, we should line up a little something like this:

When ask how he’d react if Inter scored
“I'll react in whatever way feels natural at the time. I feel very much a part of this club and my job is to help the team score goals and win games, so there's no reason to hold myself back. I don't know how I will react but I'll do it freely and I don't think there's anything wrong if I feel happy about it."

This brought the biggest, stupidest looking smile to my face. I can’t believe what he says sometimes. This man is a lyrical genius. Someone should sign him to a record deal, or at least make him sing Pazza Inter Amala. No matter what Leonardo says, this is going to be one of the most emotional days of his life. He’s going to get whistled by the Milan fans throughout the entire game. Having been one of them I couldn’t begin to imagine the emotions that he may be experiencing and will experience tomorrow. Hopefully he does what’s needed in order to pull of the win. I’m interest to see how he handles the pressure.

Well I don't have too much to say again. I'll let our boys do the talking on the pitch tomorrow. Don’t forget to join us tomorrow for the liveblog!