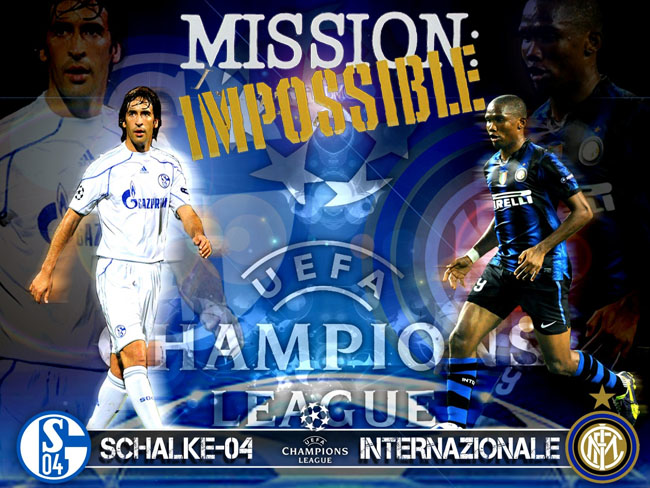 Ok, hands up: Who really truely in thier heart of hearts thinks there is a real possibility of Inter beating Shalke by 4 goals? I will fully admit that anything is possible in football, but lets be clear - Shalke put a world of hurt on Inter at the San Siro and, well, I just dont know if I can live through another bout of shattered expectations. Instead, I am approaching this game as if it were a friendly: it would be great if we went through but I am not pinning any hopes on it. I would like a good showing from the team (a win would be outstanding) and no injuries. I am fully supportive (go team!) and I think the boys are capable of pulling this off, but I just cannot emotionally handle another defeat like the last. If I seem a bit distant, that is why. I think the appeal of this game (for Inter fans at least) was summed up quite nicely by our President, Massimo Moratti: "It's about remaining fully focused and trying to pull off something that seems impossible, yet it's precisely that impossibility that makes it such an intriguing match."

What: Shalke v Internazionale
Where: Veltins-Arena, Gelsenkirchen
When: Wednesday, April 13, 8:45pm local time (11:45am pacific, 2:45pm eastern).
How to Watch: Live on Fox Soccer Plus in the US, various Sky channels in Europe; ppv at UEFA.com and FoxSoccer.tv; or find a stream (MyP2P, Rojadirecta, Ustream, and ATDHE.me).
Liveblog: Kirby? Tentative yes on the liveblog. Check back here 15 minutes before kickoff.

Inter has only played Shalke 04 a couple of times in Germany. Both were in the late 1990s and both were less than spectacular. In 1997 we played them in the first leg of the UEFA cup final... and lost (1-0). Then, in 1998, we met them again in the quarter finals of the UEFA cup... and managed a 1-all draw. Not the stuff legends are made of.

We all know how the first leg of this tie finished so let's just not even go there. Instead, I give you Deki's volley - a wonder to behold (which I cant embed because of stupid UEFA . Just follow the link).

What is there to say? Schalke 04 is a solidly mid table Bundesliga team. They sit at 9th, having scored only one more goal than they have allowed (34 and 33). They tend to either win (11) or lose (12) games as they have only drawn 6 times this year. But none of that matters. The only important statistics for us is that deeply horrifying scoreline of 2 to 5. Well, that and the fact that only 6 of our 18 shots on goal against them were on target as compared to 11 out of 17 for them. That last one is the real kicker. (ouch)

I suspect they will field a lineup quite similar to the one they used last game (why wouldn't they when it was so clearly effective?). In the end, it doesn't really matter who they put out there - we still need to beat them by four goals to go through. 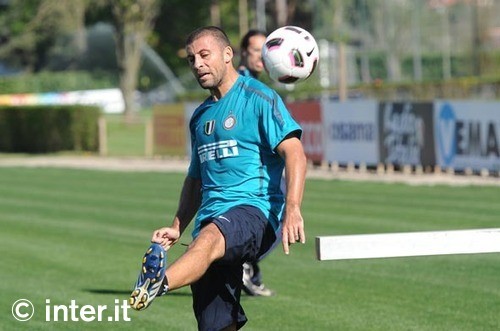 This makes me practically giddy with joy. Ben Tornato.

Leonardo is taking everyone to Germany, including Walter Samuel!!!

Chivu is, of course, suspended while Pazzini is not eligible for the CL with Inter this season. Everyone else is off to Sausage and Beer Land. Which may mean that Leonardo is going to tinker. Either that, or it is simply for morale - sort of like last year when the whole team made the trip to Camp Nou for the Barcelona tie. Whatever it means, I hope to god that Leo starts Nagatomo and lets Cuchu and Pupi play in front of the defense. It may not be as attacking as Leo likes it, but damn it, it works. He can fiddle with the other four players, but can we please oh please start with a base of:

Leo can choose the rest. Eto'o has looked tired and out of sorts recently (like since before the break) while Sneijder has just plain looked beat so I am not sure what Leo is going to be about the forward 4, but if we can stop hemorrhaging goals, there may be an infintessimal chance. Or at least maybe we wont embarrass ourselves again. I know Samuel is back to training with the group again, but I cant believe the Leo would be so desperate as to throw him into this game - even to pick up minutes at the end. Nope, he will have to wait to get back on the pitch. 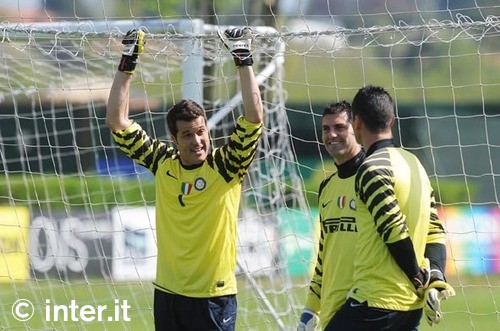 Is there a better looking keeper in existence? Nope - not possible.

So, while a come back like this is not unprecedented (Barcelona came back from a 5-1 loss to qualify), it is certainly not common place. Inter has dug themselves into a mighty deep pit and only through determination, guts, and a large dose of luck will they be able to pull themselves back out. I am trying to maintain a positive attitude while remaining realistic. If Inter go through, they will have to play the game of their season. It will take full concentration - something I know the team is capable of but I haven't seen a whole lot of it recently. I guess Wednesday would be the perfect time for them to find themselves again. Better late than never.

Light a candle, say a prayer, wear that Lucky Jersey... Whatever it is - do it. We need all the luck/positive energy/good vibes we can muster.