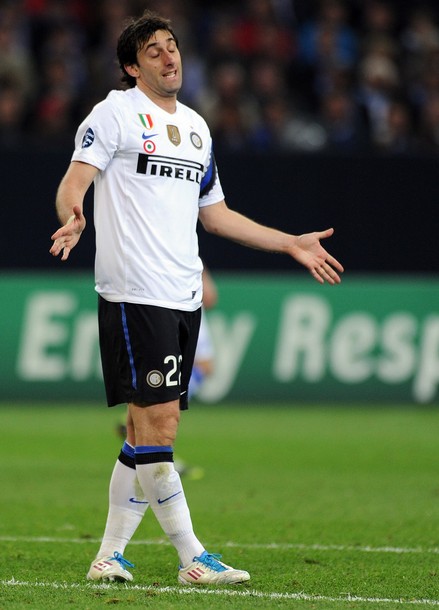 After a game like that, there’s not too much more that can be said regarding our European Campaign. We went into this game needing 4 goals and a clean sheet to start thinking about Manchester. After the first half ended 1-0, it was time to get a sandwich and start thinking about what might have been/what will be.

I don’t think I have too many regrets a whole, although it would have been nice to have beaten the teams that we should have beaten like Tottenham, Bayern, Werder Bremen and Schalke. In a tournament like this, every game is a risk, but I am convinced that we were a better collection of players than these. Of course I could say that about our month of November and our League play too. Werder Bremen in particular is a difficult pill to swallow, just because I think that game was so poorly managed and planned that it was almost criminal.

On the other hand, we went further than any other Serie A participant in all European competitions. Milan and Roma went out in the round of 16: one goalless and the other in spectacular/infamous fashion much like we did. Sampdoria didn’t make it past the playoff to the group stage and were shunted into the Europa League with Juventus, Napoli and Palermo. Samp and Palermo were only able to register a single win before bowing out, and Juventus went home winless including 2 draws to the current 8th place team in the Polish top flight. Napoli made it to the round of 32 only to fall in a tight 2-1 aggregate tie to Villarreal.

When grouped as a whole, the quarterfinal exit isn’t terribly horrible. Yeah, we should have done better, but we did okay. We’ll make our money from this gig, that’s for sure and that’s most of the reason for being in this position. But to leave to this team isn’t a great feeling. Before the game I started I made the comment that I would like to see some improvement over the first game – that we had to leave, then I want us to leave like men, go down swinging.

Did we accomplish that modest goal? I don’t know. I have been over this and over this all day. There was improvement of a sort, but Schalke weren’t really pushing as they were lying back protecting their lead a bit. We held possession but there weren’t any really dangerous situations created. There was a lot of build up, but final passes and cheaply thrown away passes were really the norm yesterday. It was a little frustrating to watch, but that’s really been the score of our season – frustrating. We attacked up the field, we got a ton of corners to testify to that, but the single goal means that we wasted a lot of time in their real estate. Their 2 goals means that we defended too high and were found wanting on the counter. 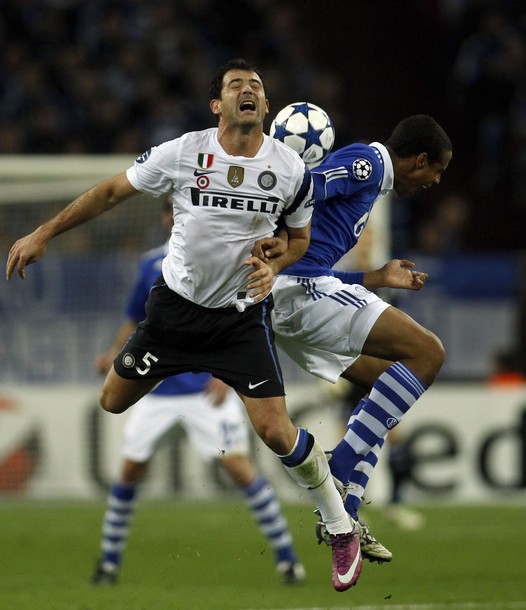 Deki: Has anyone else noticed that Deki has been subbed off at the half in the last couple of games? Here’s a question, why is he starting at all? I mean, I get that he’s a sniper and can score the odd long range effort, but his legs are done in and his passing lately is… ugh. I would say that Mariga is a nice choice for a CM in the 4312 but we know that we won’t see him anytime soon, right? Does anyone know why Cambiasso didn’t play? He was available on the bench I thought. If I were given my personal choice of midfielders from the bench, Cambiasso out ranks Stankovic every night of the week. 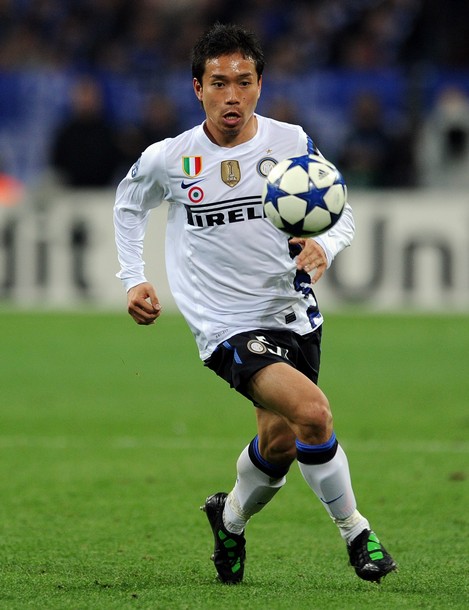 Nagatomo: If we had a hero out there on Wednesday it was Nagatomo. The Littlest Player ran his ass off and really was a tenacious terrier. First Champions League game? No problem. Big pressure to make up 4 goals? Didn’t show any nervousness. Remember he’s a loaner. I think that he’ll be redeemed… in the football sense. I really like the energy he brings. He’s all business chasing the ball and he doesn’t seem to mind that he’s been sprinting up and down the field all day. When he learns more than how to order dinner he’ll be even more effective. 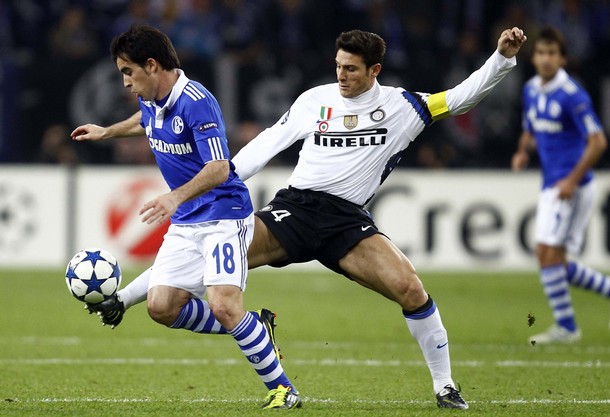 Zanetti: He was a ghost out there and it wasn’t the first time this season that we are saying this. There was some discussion during the LiveBlog about whether he needed to be out there last night. It’s a tough call and a disturbing one. Sooner or later we are going to have to live with a Zanetti-less Inter and I hope that it’s much later rather than sooner. But he doesn’t look like he’s dealing with the current schedule too well.

The curse of age isn’t that the player loses skill. Just the opposite, the skills have been practiced and honed to razor-like sharpness. The curse of age is recovery time. Younger players recover faster; it doesn’t matter if we are talking halftime recovery or a week’s holiday. It’s one of the immutable laws of the jungle. Last year we were an old club, but the players hadn’t had a previous Champions League that extended into late May on top of Serie A. Last season’s team hadn’t had all that on top of a whole summer of World Cup. When the tank is empty it takes longer to replenish and we have too many players who are taking too long to fill up. 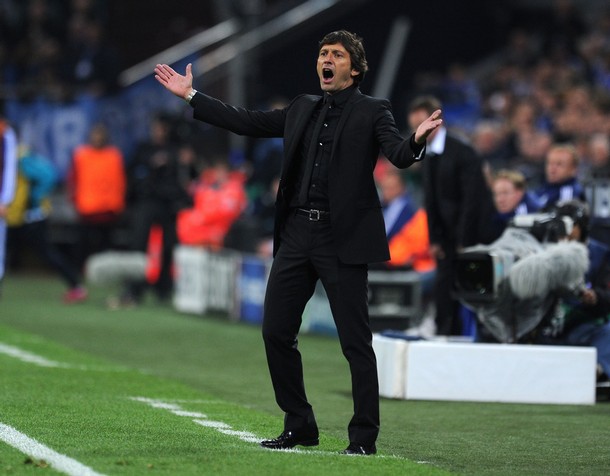 Leonardo: As we have come to expect, the team was willing for him, but the flesh was a might weak. The formation was fine. The personnel I discussed already – Deki in and Cambiasso out was a mistake, I think. The game management was… meh. At halftime we were down 1-0 and we made the change Pandev for Deki – fine. I have no problem with he change per se as long as I saw Cambiasso for Motta/Zanetti and the formation change from 4312 to 4231. But I didn’t see that. I didn’t see any other changes really until the 80th minute where Coutinho came in for Sneijder. Basically it meant that Leo conceded the game and wanted to save Wes for Parma. It also means that we left the game with a sub unused.

We knew going in that Leo is going to be a bit naïve here. We said it back in December when he was hired that we are going to have to live with his growing tactically to gain from his motivation. We knew this. But my problem is that when the aggregate score is 2-6 and we aren’t creating anything substantial – Schalke’s keeper didn’t have to be spectacular on Wednesday, just very solid – why not throw on Cambiasso to win some challenges in the midfield to feed to the attackers. Why not put in Mariga to do the same. Why not throw on there Obi, just to get him a run out and see what he can do. At 2-6, it’s worth a risk to see if one of the young guys can light a spark for the older guys. What the hell is the difference losing 2-6 on aggregate or some worse, it’s still only one game in one tie and we were going home anyway. I am just a little disappointed that we weren’t more daring or showed more verve. 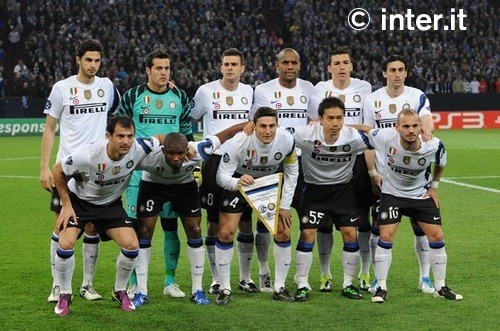