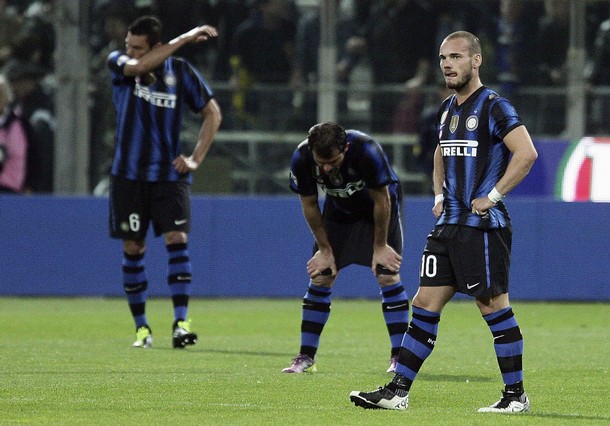 Parma is a team that is fighting relegation and by definition that means that we had to beat them. No ifs ands or buts. Not if we want to suffer the same fate of those teams that won’t be earning that 30-40 million Euros for making the round of 16. And let’s not kid ourselves, we need that money.

So we crapped the bed against Parma. One might find it odd that I am not as angry as I normally am when we lose – hence the word “crap” and not my usual “shit”. According to La Gazzetta we are in crisis now. Isn’t it odd how I don’t remember the word “crisis” when we were in 7th place?

There are all these comparisons between Leo and Benitez appearing out of nowhere. More on this later, but I think it’s ridiculous. The players are playing as well as they can for Leo, as of right now. The players almost revolted against Benitez and, for me, it was miserable watching the players trudge through playing for a man they clearly hated. Trust me, there is a difference between the two. Besides, it's the players ultimately who have to go out and play.

Forget the pagelle. Everyone was terrible except Nagatomo and he even got lost on one play that cost us heavy.

I keep saying this and I think that I am talking to myself, so pretty soon I am just going to stop. We. Are. Tired. Our. Legs. Are. Dead. You can yell at Leo all you want that he’s a moron and that he doesn’t know what he’s doing. You might even be right. But the problem with this team isn’t that Leo is making mistakes with the formations – he’s only using 2 formations both of which we have had success with him in charge. He might be making mistakes with the personnel – as much as I love Mariga, I don’t think that he was the difference in the game Saturday. But the reality is that there’s nothing he or anyone can do to help this team other then take them on vacation for a month.

And I am not a Leo fan. My memory is too long for me to ever love him. But, I like that the team is playing for him, at the moment and in the past. The team didn’t play for Benitez, even during September and October when we were just doing okay there wasn’t any spirit at all.

Was there spirit on Saturday? The team looked like they wanted to win, the will was there, just not the ability. They went forward, but there just wasn’t much of a link between the defense and the midfield nor were there any ideas once the ball got there. Anytime the ball went forward and Eto’o wasn’t involved, the ball got rammed right back down our throats. Stankovic, who got a good rating from La Gazzetta apparently for missing every pass and shot he attempted, lost the ball like he was contractually obligated to. Zanetti was less than dynamic as well. We just looked dull, like a knife used too much.

This combination of players has never been a technically great bunch of passers. We didn’t have to be. We were hustle machines and would tackle the ball in the midfield to move it forward from an advanced position on the fast break. We aren’t doing that lately and the increasingly poor passing through the midfield means that our forwards aren’t getting the ball in positions to strike. 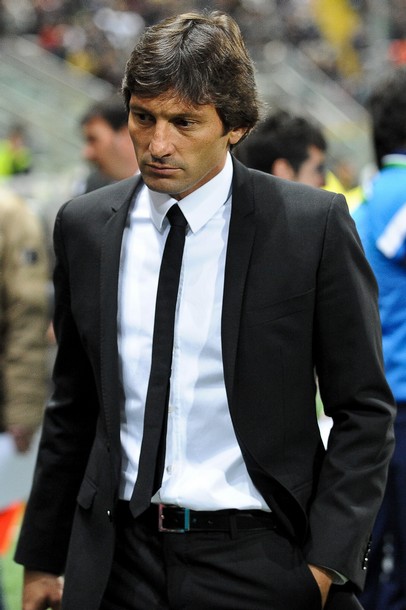 The latest weirdness for me lately is the news that Leo is no better than Benitez. The rationale is that the two have a similar record now that Leo has lost his 4th league game but that Leo has had a healthier team so he should have done better.

The logic is faulty but then again, we are talking about people who need to find problems in order to draw attention. Here’s the “data” that are citing. Supposedly, these are in all competitions:

Before I even get into this I am going to throw out all the Coppa games, Champion League games, Super Cup, European Super Cup and Club World Cup. Why? Mostly because everything but the Champions League games could have been lost and I don’t think I would have blinked twice.

But really, there is no way to compare these games played under one coach fairly with different games played under another. For example, according to goal.com where all this bullshit starts, Benitez is getting credit for Club World Cup victories that the team won in spite of him. The team hated him to a toxic degree. Despite the winning of the cup, that’s not good coaching – and it’s dishonest to suggest that it’s a feather in his cap, to… you know, alienate the whole team against him to the point where they have to work against him to win. Besides which the competition level is quite a drop from even Coppa Italia games which are no where near Serie A intensity. Speaking of which, Leo winning Coppa games isn’t really a huge accomplishment, either. Here’s the revised records that actually compares apples to apples:

So in Serie A games, we can eyeball this and see that Leo is miles better than Benitez was, right? Hey, why eyeball this when I have a calculator conveniently located on my computer:

It’s been claimed that as bad as Benitez was, Leo just as bad but has had Cesar, Maicon, Cambiasso, Motta, Sneijder and Milito and that Rafa didn’t have any of these players at his disposal, at all.

That’s a nice story and if were true, it would really put all us Benitez haters in our place but good. Unfortunately reality tells a different tale. Even if one disregards the points above – you know, those points that are the entire reason there even is a season, duuuuh - Cesar played 9/15 Serie A games for Benitez. Maicon played 8/15, Sneijder played 13/15 and Cambiasso played 11/15 games for Benitez. Motta and Milito however, didn’t play a second for Benitez. Gosh, good remembering… .

Besides, and this is key, Benitez had Walter Adrian Samuel for 8 games. Eight games that Benitez couldn’t translate into 8 measly league wins in his entire misbegotten time here at Inter. Leo? Not a second. Oh yeah, and this is also key, almost all of the injuries that Benitez had to deal with were of his own making. Running the troops ragged every day and then expecting their bodies to hold up was clearly not the way to run a team. I know, who knew, right?

Does all this mean that I love Leo like I love my brother? No. Does this mean that I think he’s the greatest coach since Mourinho? Nope. Not even close. I have been saying since day one of his reign that he’s tactically naïve and I am hoping that his motivation can overcome his shortcomings. Am I happy with the performance of the team, generally since Leo took over? Compared to Benitez, yes. From 7th we have risen to 2nd and settle currently at 3rd. If the season were to end today, we are in Champions League without having to go through a playoff. Would I still be happy if we ended at 4th? Considering where I thought we would land in December? Yeppers.

Do I blame Leo for our inability to win a title this season? Do I think he’s a dunder head for losing yesterday? Do I blame him for our poor results lately?

Nope. I think that since taking over he’s done a remarkable job getting us to fight for what I thought has been our promise land since August. Of course, and this is actually more important to me, but Leo had been a wash of cool water over the frayed tempers and exposed nerves that had been called Benitez’s guidance. The team is a team again, and not a simmering vat of malcontents and “fuck the coach!” types.

The last I want to say about this madness is that it has been claimed that Benitez got no reinforcement and that Leo got Pazzini, Frogboy, Naga and Kharja. All true. Want to know what Benitez got that Leo didn’t, but has been conveniently forgotten? An entire summer to mold, teach and get to know his charges so that an understanding and a singleness of purpose could grow between them. Benitez got all this and ended up failing in all three points. Leo? By my estimation he’s got at least 1 out of 3 and he only had about 10 days to do it in.

There are going to be those that think that this is an I Love Me Some Leo piece and try to paint me as a Leo delusional fanboy. However, this - and most of what I write about Leo - is actually an I Hate Me Some Benitez piece. It shocks me in a comical fashion no end to think that there are people who could possibly entertain the notion that Benitez isn’t the worst coach this team has seen since Tardelli took the reigns.

Leo might stay for the next season, on a very short leash indeed, depending on how the end of this season works itself out. If we stay in a Champions League spot I don’t see his ouster short of a Mourinho comeback – which I also don’t see, depending on his Champions League fate. Despite my feeling, there is even money, right now, on his being asked to step down. Frankly, it doesn’t matter to me which happens to him, but for the sake of the team, I am hoping for some continuity. I would hate to see the carousel return considering we had made such headway lately. I am an advocate of the current French National Team coach, Blanc, but there is no way he leaves that team before 2014, unless there is a disaster. Pep could be a consideration if we go natal and need a coach to grow the team from infancy since he seems to be away from Barca in next year or two. Mourinho’s protégé is hardly a secret and will be in the middle of a bidding war. I have a gut feeling that Diego Simeone could be one of the good coaches down the line. And I have no reading on Sinisia. None at all. 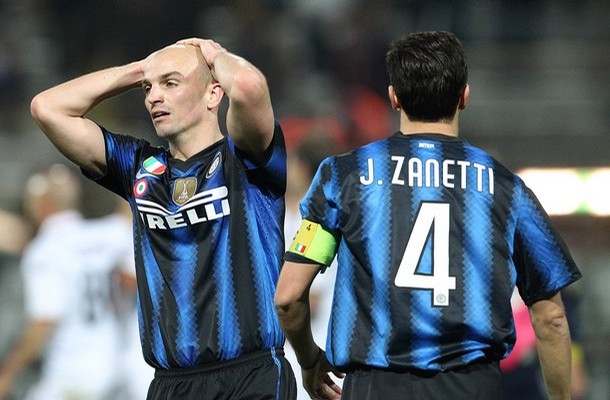