Share All sharing options for: Inter v Lazio: The Battle For Third 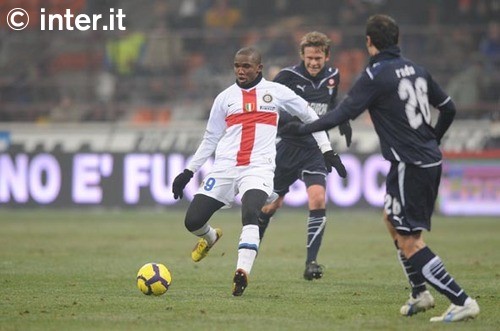 Lazio come to town looking to score a top-three finish to their season. Unfortunately for them, they have to go through Inter to get there. Right now, Inter and Lazio sit third and fourth (respectively) and both want an easy in to the Champions League. Inter couldn't manage to beat them at the Olimpico, but that was a whole coach ago in an entirely different year. Inter fans are hoping things will be better this time around. There is a lot up for grabs: third gets extra weeks on the beach while fourth has to get through qualifiers against obscure Eastern European teams next summer. With so much at stake, things may get a bit scrappy.

What: Inter v Lazio
Where: San Siro, Milan
When: Saturday, April 23, 3pm local time (6am pacific, 9am eastern)
How to Watch: Live on ESPN3.com, RAI, and The Score (delayed on Fox Soccer at 5pm pacific, 8pm eastern) or you can find a stream - MyP2P, Rojadirecta, Ustream, and ATDHE.me
Liveblog: It's early but I think Kirby may well be up for it. Check back 15 minutes before kickoff.

Alrighty. A quick look at the statistics around this fixture paint Inter in a very good light. Of the 68 times Inter has played Lazio at home, we have only lost seven. There have been a considerable number of draws (23), but usually, Inter wins (38). Plus, we outscore Lazio almost 3 to 1 (134 gf, 56 ga). Just to ratchet the pressure up a little more, Lazio has not beaten Inter in this fixture since 1998 (when it was an epic 3-5 battle). Last year, things were a bit tighter, with a single goal from Eto'o deciding the match in Inter's favor. Still, a win is a win and I would be thrilled if this matched finished 1-0 in Inter's favor again on Saturday.

Brrrr. It sure looks cold.

Well, there used to be a pretty active Lazio board but things seem to changed hands over there and slowed down. Too bad. Anyway, as I said, Lazio is right behind us in fourth place. They only have three less points than us (60) and are breathing down our neck. They are coming off a big win against Catania (1-4) so will likely have their tails up (Great. Just what we need).

Matuzalem is suspended for this game, while Radu is out for the rest of the season (two fractured vertebre, yikes!). I guess both Diakite and Sculli have been inured recently so are maybes right now while Brocchi seems ready to come back.

The Inter defese will certainly have thier work cut out for them. The forward four players in the formation have 29 goals and 19 assists between them. Their most dangerous player seems to be Hernanes (9 goals, 5 assists), but Mauri is no slouch either (6 goals, 9 assists). I dont know that we can count on either of them to Vucinic in front of goal like the forwards in the Roma game. Given our defeniseve woes recently, I think this will be our biggest problem (only infentessimly smaller is the seeming inability of our forwards to score).

Defensively, they are among the better teams, having only allowed 30 goals (as compared to our - gulp - 37). Recently, Roma put two past them and Napoli four, so we may have a chance yet. 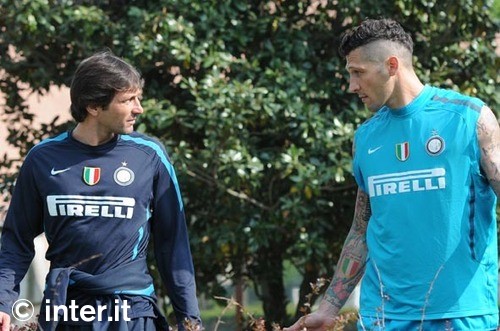 Even Leo is astounded at Marco's poor personal grooming choices. Yikes, that is some terrible hair right there.

Leo is called up the gang for Lazio:

While Eto'o has recovered from his ankle injury, Thiago Motta has been sent to Dr. Combi for more tests. Apparently, he has pains in his leg or something. I assume the club will tell us something about this later. Samuel has been training regularly with the team but is still not ready to return. 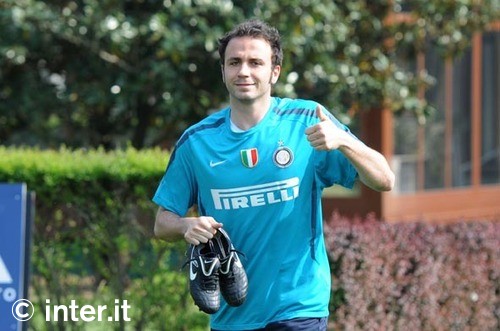 I dont know if that is confidence or desperation in his eyes.

Which brings us to our forwards. We are having a little problem up front, it seems (or so the press would have us believe). Eto'o got a brace against Genoa in March, then one against Brescia (the draw), but not a thing since. Add to that Pazzini's winner against Lecce and you have the sum total of the goals made by our forwards in our last 6 league games. When you add in Champions League and Coppa Italia games, it isn't a whole lot better. Milito got a goal against Schalke, but Inter's forwards really haven't looked threatening since March. Which is not terribly comforting. Still, I guess another way to look at is that both Eto'o and Pazzini are due. Anything from Milito at this point is just gravy.

As we had not GIPATI from the last game, I thought I would give you all a crack at it again. So, once again, if you correctly predict Leo's starting 11 you will be declared a Grand Imperial Poobah of All Things Inter. As always, the title comes with a spiffy certificate, personalized with your name and suitable for framing (impress you friends and neighbors). Besides, it means I dont have to try to come up with anything myself. Whew. 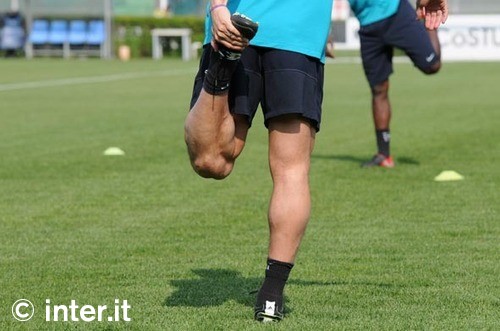 Oooo! And how about our first ever "Guess Who" contest: whose thighs of steel are these? No prizes, just gloating rights.

There is no use flogging the dead horse around here. Everyone knows what Inter needs to do and we all know what is at stake. These last few games will either make or break our season. The only thing left, really, is the playing. Lazio is a good team. They will be difficult to beat, but beat them we must to secure our spot in the Champions League next season. Which is the bare minimum of what could barely be construed as a positive ending to this season. It has been so heartbreaking to watch all our high hopes slip away after all that sweat and blood to claw our way up from the very depths of ... dare I say it... mid table. It would be a real shame to make all that effort for naught by slipping back down to the dank purgatory of fourth, or worse yet, the humiliation of the Europa League. Third place may not seem like much to the team - habituated to success as they have been these last five years - but it is ours and it is all we have right now. And if that isn't worth fighting for, I dont know what is.

Oh, and a very happy easter to everyone! 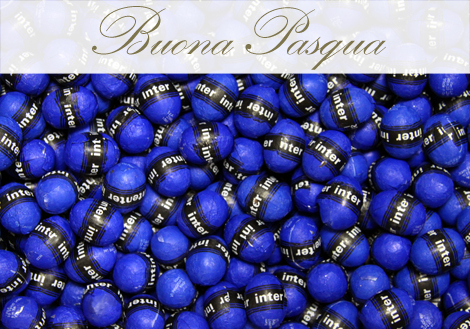