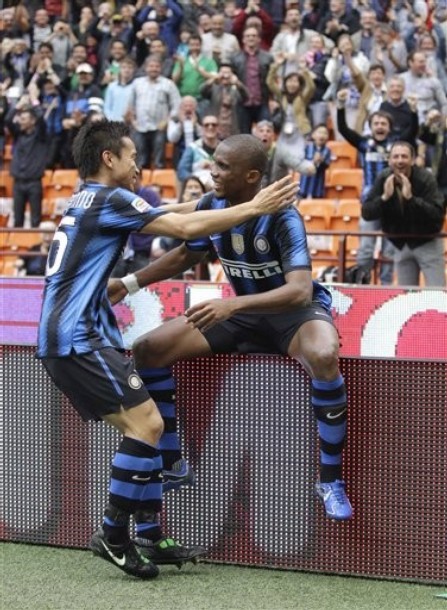 We are knee deep in Spring – supposedly – and likewise, we are sensing something of a renewal from Our Beloved Team. This was a gritty game. It certainly wasn’t pretty. And it was one where they wore their hearts on their sleeves. In short, it was a game that could have been played last season or in any of the 4 seasons before and if the camera stayed far enough away, the wrinkles in our 30+ boys wouldn’t give away in which year the game was actually played – although these less than ideally styled home jerseys, that I will forever associate with Benitez, certainly would.

A previous post I wrote said that our group was never the most technically gifted but their heart and their hustle made up for a lot of deficiencies. We saw a lot of that today. Cambiasso was the midfield conductor again. Mariga was on the field for about a half of play and all he brings to the table is hustle and power. Zanetti worked his tail off covering for Maicon and setting up Eto’o for the winning goal. Nagatomo, bless his heart, ran like an engine for the full 90 minutes. He was hacked down about a half dozen times and he played a solid pro like Lichtsteiner to a draw defensively and did really, really well when he attacked.

Cesar: Terrible decision to come out and bundle Zarate off the ball feet first. First of all, it was poor form – the hands and head should have been far post side, not near post. Second of all, Cesar, had he kept his cool, should have anticipated that Zarate would have tried a juke. He’s a tricksy dribbler that even the quickest of glances at scout film would have revealed. 4.0
Castellazzi: Outside of the penalty and one series of events (that had me gritting my teeth and cursing skyward as the man takes forever to come off his line) I thought Castellazzi did a very credible job. 6.0
Maicon: Maicon seemed dynamic and willing to go up and down the sideline. He also did a mostly competent job on defense. The fact that I have to describe his performance thusly is an indictment of how far he’s fallen. 6.5
Lucio: As well and inspired as he played on Tuesday, I thought that Lucio dropped some concentration here. I thought that Lazio was far more dangerous from his side of center. 5.5
Ranocchia: I personally thought that Frogboy was the better of the two central defenders. This doesn’t mean that he wasn’t beaten once or twice or that I thought it was a perfect performance. I just thought that he was more focused and more apt to intercept. 6.5
Naga: What a performance from The Diminutive One. He was energetic. He was willing to take a hit. He was willing to be first to the ball. Kid’s got a lot of guts. I like that. 8.0
Zanetti: It’s an outing like this that reminds you of what he is. There are reports that he’s the one that reamed everyone a new one in the dressing room one training session. He worked so hard on the right midfield that it makes you proud of this team because of people like him. Oh yeah, his nearly half field pass to put Eto’o in a position to go one v one with Biava, instead of the one v the four that Lazio were using to guard the lone forward was absolutely exquisite, by the way. 8.0
Cambiasso: I still don’t think that he’s all the way back to his last season ability, but he was Mr. Coordinator today. He was the glue that bound the defense to the midfield so well today. 6.5
Deki: I didn’t think that Deki did anything wonderful today. I know that there is a wave of Deki good will from Tuesday – as well there should be, it was a wonderful goal - but back to work today and I didn’t think he was too great before he left just after half with another injury. 6.0
Mariga: Mariga was able to play almost the whole half in Deki’s place and I noticed him continually teaming up with Cambiasso to try and control the center of the field the whole of the second half as Zanetti was almost always covering for Maicon. Mariga made a lot of tackles and he had a thunderous chance at a header on a corner. Lazio is a good team and they tried to take advantage of Mariga, but he was up to it. He was a bigger presence than Deki was... am I crazy to think this? 6.5
Sneijder: Wes is like an investment. He pays a small dividend each game with very good contribution and every once in a while you get a windfall from him. Today is a windfall game. Were Inter dead with 5 minutes to go in the first half? Not dead, but pulling even right before the break was very key to the attitude that the team came back on the field with. I thought I saw him contribute to defense too. 7.5
Joel Obi: Obi doesn’t get a lot of time, but it’s become obvious that maybe he should. It’s evident that he doesn’t have a lot of people’s trust, watch to see how many look up and pass to him. But he hustles and comes back to defend – not a bad trait for a mostly attacking type player. Also, I thought that he passed the ball pretty well, too. 6.5
Eto’o: Last season Eto’o had about a month where he lost form and crapped up the place. I think we have just passed this season’s version of that. Eto’o looked miles better today than he did a week ago. Maybe it’s the rest or maybe he’s playing in the center of the field again. His playing as the lone striker for about an hour against the entire back four of Lazio is Herculean. 8.0
Milito: Milito only had about 20 minutes today to show anything, but I don’t think he really did in that time. I will say this; Leo’s taking him off the field for Cesar’s red was absolutely the right choice to make. 6.0

This game was all about heart and grit – which made it a perfect Leo game. The formation was kind of crapped when we went down to 10, but everyone had to step up and make an emotional contribution to the cause.

We burn Leo when he makes a mistake, rightly, but it’s time to admit he made a good call when he took Milito off the field for Castellazzi. The other candidate was Stankovic, but it’s safe to say that Deki will run for you if he does nothing else. With Eto’o on the field who can play better from deeper, Milito was the only choice to come off and Leo made it.

Another good call for Leo was bringing on Mariga for Deki instead of Pandev or something. Kharja wasn’t on the bench for some reason, but Mariga gave a good account of himself. The Roma game saw Obi play very well indeed and it was very nice to see the youth player get some well deserved time on the field.

And the players still play for Leo. For the last 2 weeks or so, we have been in “crisis”. Those of you who have been here for a while know that we like to joke when the media put us into “crisis” because usually that means that we had a two game losing streak of something. Well, it was a little worse than that and there were reports of player discontent and so on. Anhoo, with the reports and the team performances so far in April, it seemed like this time it was for real.

A team that acts like that is one that will be – in the long run I hope - fine, despite some flaws and low points in a season. We are now second in the standings, well behind the leaders and a point in front of third, but six points ahead of fourth. Which means that it’s pretty likely that we will finish 2nd or 3rd. Since both are automatically sent to the group stages of the Champions League this season, I don’t really care which we end up being. Anyway the point is that for the first time in about a half a year, I have some hope and optimism for what the summer and beyond might bring us. 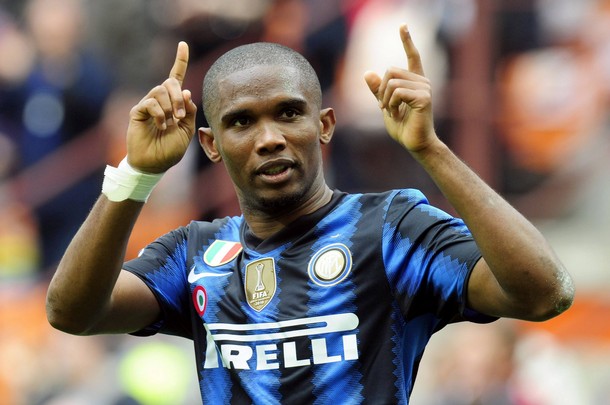 Eto’o fighting up at the top of the formation by himself against the Lazio backline who were obviously and rightly scared of him was absolutely heroic and very deserving of the MIPOG. But there was another player who I thought put the team on his shoulders and through strength of will pull the team up by its collective bootstraps and that was Nagatomo. 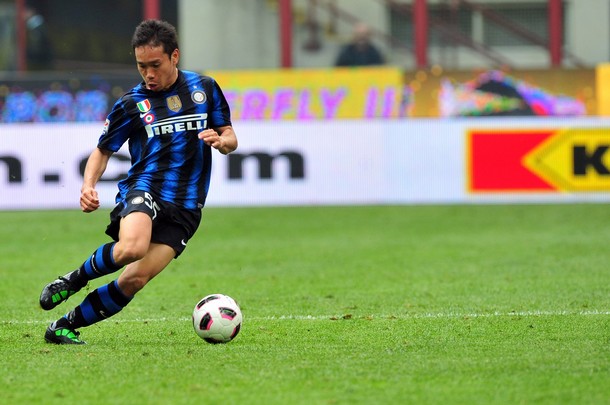 Not only did the Japanese player have a very good technical game, not only did the Japanese player continue to attack even after the penalty and sending off, but at times it looked like he was doing it by himself… or maybe just him and Eto’o running at the Lazio end of the field. He didn’t quit at all when things got pear shaped. He just decided that these set backs meant that he had to work harder. There were corner kicks that it seemed like he earned all on his own. He even tried to bring the home crowd back into the game. Here’s a can’t miss prediction: Inter will go ahead and spend the 4 million Euros to purchase their next starting fullback. 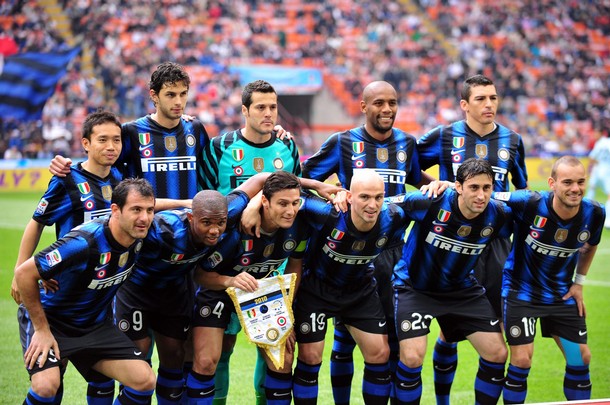